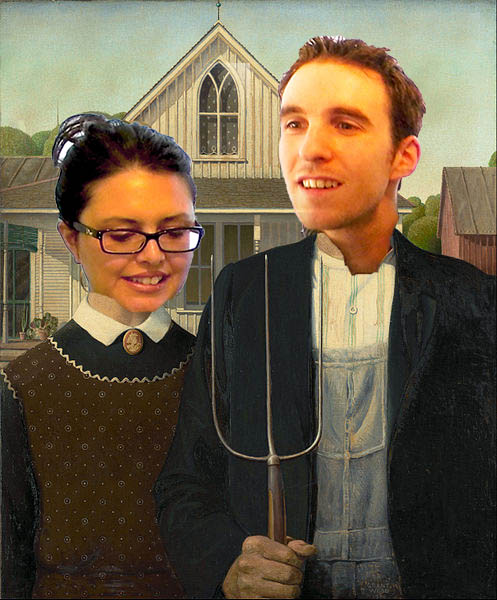 And by now, you're wondering if the experiment I was referring to was testing whether Corey will be mad at me for taking unflattering pics of us and photoshopping them onto an iconic painting for everyone to see...

I'm afraid not.  There's another experiment afoot!  We're travelling back in time... in a way.

It's no secret that Corey and I both work very long hours.  We also both tend to be the type of people who take on a lot of extra projects.  This leaves little "free" time for the two of us and so we find that we need to make an effort to make our time off really count!

Television has never been a big part of our lives.  I'm not a fan of having a TV in my living room, but in the condo, there were fewer rooms to house a boob tube.  This meant that a TV ended up in our bedroom... which is also not ideal.

Don't get me wrong- I enjoy certain shows as much as the next gal.  A little low brow humour?  Bring it on!  (You know I'm a sucker for "That's what she said" jokes!)  Corey and I each have a few shows that we watch and I have no problem with that.

I suppose my issue started when the condo was listed.  It was a busy time of year for both of us at work and I'm sorry to admit that there were nights when we would come home late, turn on the TV and just pass out.  Each time this happened, I felt like I had lost an entire evening and it left me feeling sick about the time that had been wasted.  I would rather have been reading a book, doing something productive or even watching a program or movie a little more deliberately.  I just hate watching something I don't care about just because nothing else is on.

Anyway, we're breaking this bad habit by trying life without cable in the new/old house.  We figure "back to basics" could be an adventure in itself.  We still watch shows through Netflix and we have DVDs but there's no more channel surfing at our house.

So far, we haven't noticed much of a change.  Probably because we've been too busy!  This may not be a realistic forever plan (Corey's a sports guy... and it's especially hard for him with the Leafs in the playoffs!) but it's nice to spend more time together while we're both busy in our careers.

This topic came up when a friend of mine offered us her TV since she is renovating and getting a larger one.  While her offer was kind (and tempting) we are trying to embrace a "less is more" attitude for now by spending our old "TV time" taking walks and working on our home.  Who's with me?