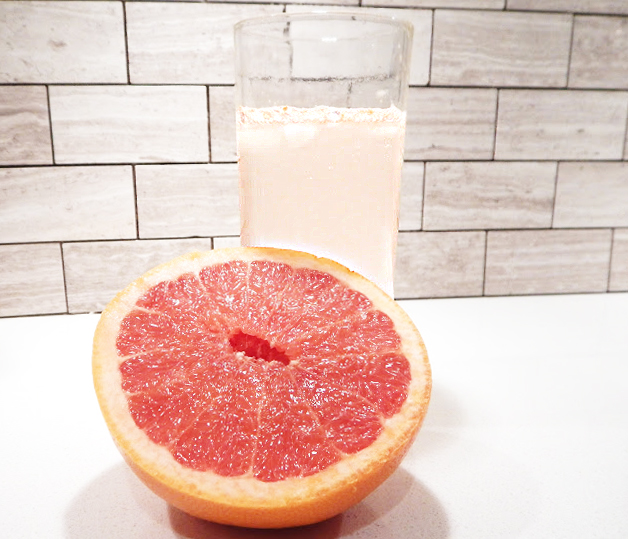 The long weekend is finally here and it's perfect weather to enjoy a cocktail outside.

Last summer, Corey would make me an Elderflower Collins every weekend.  It's refreshing and citrusy and was a lovely compliment to a hot summer evening.  Get the basic recipe here but we always substitute grapefruit juice for lemon juice with yummy results.

This summer, I've been enjoying the slightly tart Whiskey Collins.  I remember back before I was old enough to legally drink, a friend of mine snuck a water bottle filled with her father's whiskey into a party.  I turned up my nose and told her it was an old man's drink.  Obviously, my tastes have since changed and I now really enjoy whiskey but it's often overwhelming in the heat.  Enter the Whiskey Collins.  I like mine a little tart so I don't use much simple syrup and I also like it fizzy so fresh soda water is a staple.  I like the simplicity and the fact that I can order it in a bar or restaurant without explaining how it's made.  Here's the recipe. 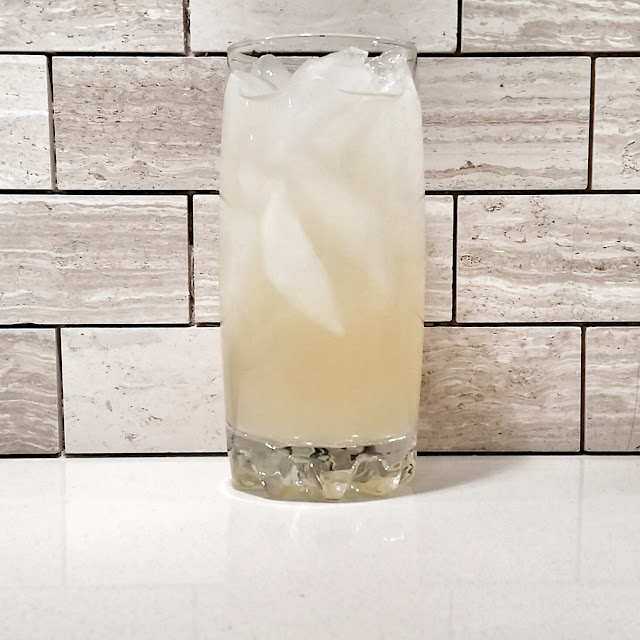 What did our parents ever do in the days before we all had cameras with us on our phones?  It makes the photos that were actually deliberately captured even more treasured, doesn't it?  Growing up, I loved looking through our family photo albums and I want Rudy to also have the opportunity to look through our old photos.  Whether they're printed and saved in albums or maybe just on USB or Instagram, I want her to have lots of pictures to look at when she's curious about her early years.

Now, I'm certainly not a pro photographer.  Far from it, actually!  I highly respect the work of the pros and we often hire professional photographers to capture our family at various stages in life, but there are so many special moments each day and I wanted to be able to record them myself.  Because I don't want to miss out on all of Rudy's adorable phases, I've done some research on becoming a better (very) amateur photographer.  I don't own a fancy camera (not that I even know enough to shoot manual) but I do have my phone with me pretty much 24/7 for work.  Because of this, 99% of my photos are taken with my phone.

That being said, I often receive lovely compliments on my photos so I thought I'd share my tricks.  I'm always learning, so I'd also love to hear yours!  Here are a few photos (below) from my Instagram. 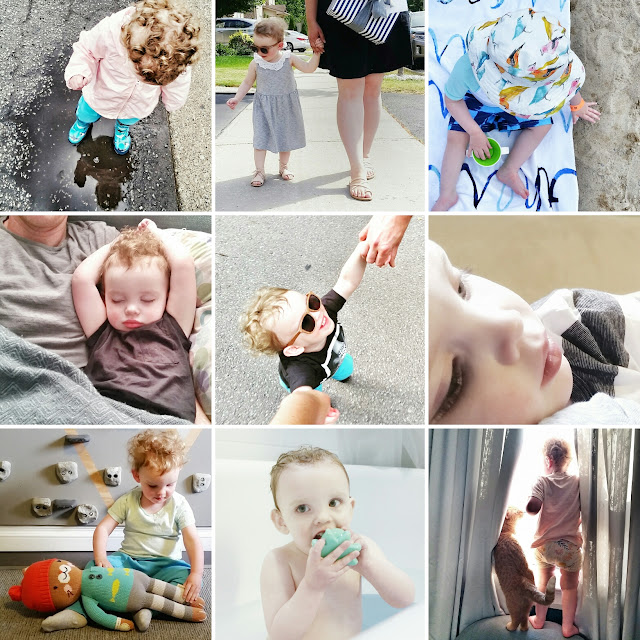 1.  Camera Ready:  I always have my phone with me (mostly for work) and I'm extra conscious to have it ready if we're somewhere cool.  We often walk past a cool graffiti wall and Rudy loves to run past it so I know I'll often get a cool photo there but a lot of our sweetest pictures are from around the house.

2.  Don't Pose:  I don't know how toddlers can model clothing because I would have zero hope of getting Rudy to actually pose for a photo.  All our photos are candids and (while we occasionally try to get her to look at the camera for a particular shot) she's rarely looking at the camera and usually engaged in something else.

3.  Snap Snap Snap:  Between constantly moving toddlers and pets, nobody at our house is staying still for a photo.  For every photo that turns out, there are at least ten more where Rudy's making a face, or has a blurry limb from moving it, or there's a line of orange (cat or Rudy) running across the shot.  If something awesome or cute is happening, I usually snap a bunch of photos and then I put my phone away so that I can look at them later.

4.  Natural Light:  Almost all of my best photos are taken either outside or near a window.  I often avoid artificial lighting in pictures if I can and use any available natural light.  I know that I can always lighten the photo a bit later but it will look more crisp if the light is good to start with.

5.  Check Your Settings:  I learned this the hard way!  I had my photo quality set to the lowest setting (default) when I took Rudy's 1st birthday pictures and, when one of the photos turned out beautifully, I discovered that I couldn't have it printed because it would be too blurry.  I also now set my camera so that I can tap the screen to focus on a specific object, which is nice.

6.  Angle and Background:  While we don't stage photos or (successfully) move Rudy to get the right shot, I do try to move myself so that I'm catching good light or a better background.  Sometimes, I'll move a little to avoid the mess in the background and sometimes, I move specifically so that I'm perpendicular to the background, which makes it less distracting.  I also try to get creative with the angle I'm taking the picture from: Sometimes I get down on the floor and other times I try to capture the photo from above.  Both have great effects.

7.  Composition:  When I started taking pictures of Rudy, I had a mental block about exactly how much of her was supposed to be in the frame.  For instance, "Am I supposed to make sure her feet are in every picture if she's standing?"  Haha!  Taking pictures got a lot easier once I realized that there's no real rule.  Sometimes, a photo looks great with a whole body in the frame, other times a close up of the face is more powerful.  Sometimes, I want Rudy to fill the frame, and other times I want to capture more of the background or scenery.

8.  Colour:  I try to use simple backgrounds as often as possible.  I also love blue and green, so there's a pretty consistent colour palette in our home (and even in Rudy's clothing) so we end up with a pretty cohesive colour scheme in a lot of our pictures.

9.  Edit:  All of my photos (or nearly all) are edited a little.  Sometimes, I like a more stylized look (either over-saturated or ultra light) but usually, I use a photo editor to make the lighting and colours show more true to life than the limited lighting in the photo may allow.  I usually begin by rotating (usually to line up the background) and cropping a photo.  I try to keep the rule of thirds in mind as well as aiming to maintain as clean a photo as possible.  Then, I lighten a little, increase the contrast a little and either increase or decrease the saturation level.

Here's an example of a photo throughout the editing process, which typically takes about a minute on my phone.

Here's another thing I edit: bruises!  If you also have a fair-skinned and adventurous toddler, you're no stranger to constant bruises.  To us, they're just a part of Rudy learning when to climb and when to hold on as she explores the world, but they can also be a source of embarrassment for me sometimes because I'm afraid some people wonder if I just let her run around unsupervised all the time.  I'll confess that sometimes, I don't want a prominent bruise to detract from a lovely photo (like the sunglasses-shaped forehead bruise on Rudy in the photo below) so I use the healing brush to erase it from the photo.

10.  Play:  I like to have fun with my photo editing.  Sometimes, if I have several cute photos from an outing and I don't want to spam everyone's Instagram feed, I'll make a collage.  Other times, I like to add words or graphics with my favourite apps.

1.  Snapseed is my favourite app for adjusting angles, light, contrast and many other aspects of a photo that I'm still figuring out.  It also has some fun actions, like the ability to blur the background of a photo.

2.  Layout is my "go-to" app if I want to make a photo collage.  I also use it for fun effects sometimes, like in the photo below, which is actually two photos taken from the same spot a couple of seconds apart. 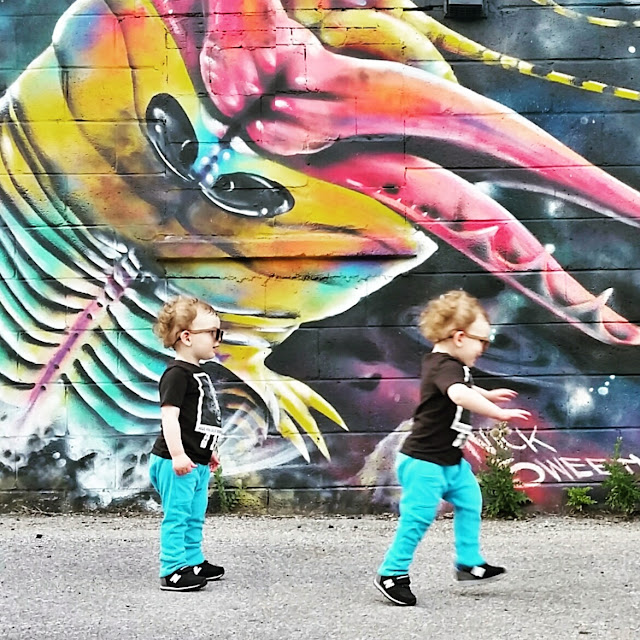 3.  Baby Pics is a fun app, which provides graphics for common baby and pregnancy milestones.  It also allows you to add text of your own, which is how I made photo at the top of this post.

So, those are my tricks.  It's fun to be able to capture nice photos of Rudy for friends and grandparents (and for us and her, when she's older) without spending time or money.  I still use photoshop for some blog posts but these tricks and apps allow me to do a lot on my phone now.  What are your best tricks and tips? 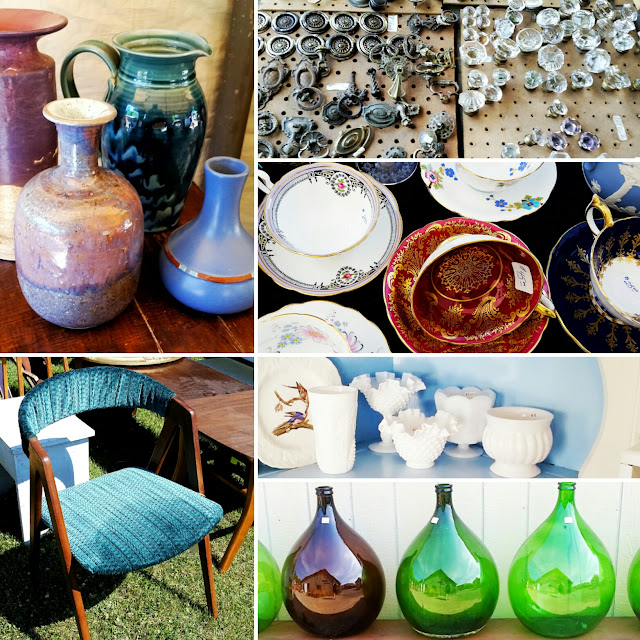 A couple of weeks ago, we left the house nice and early for a quick trip to Guelph for the Aberfoyle Antique Market.  Unlike other years, we were not hunting for any furniture.  In fact, it's time for some clearing out because I'm feeling like we're bursting at the seams already!  This time, we went without any shopping list at all and it made for a really relaxing couple of hours.

We still managed lots of window shopping and we also kept Rudy from smashing any priceless treasures.  I did end up with two new china teacups for my collection.  Aren't they pretty? 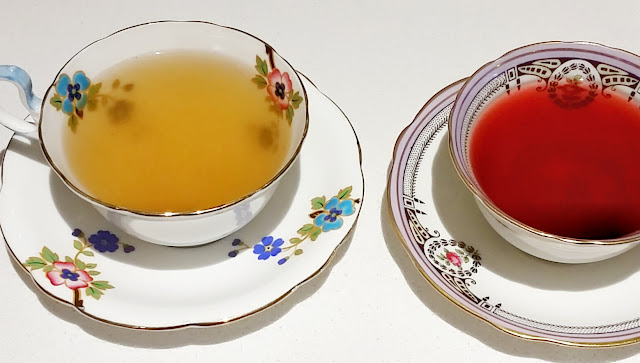 And, speaking of tea, I'm on a tea kick this summer!  I've been cutting back on my coffee intake lately and I've found some teas that can almost come close to replacing coffee for me, so I wanted to share: This tea, on ice is my absolute favourite, followed closely by this one, which has zero caffeine.  When I want a cold tea with a boost of caffeine, I reach for this one.  This is a decadent hot tea with just enough caffeine.  And finally, when I want a soothing caffeine-free hot tea, this is my go-to.  They all taste about 25% better in a nice mug or cup.  ;) Enjoy!
Posted by Taylor de Sa at 10:04 pm
Antiques and Tea
2016-07-03T22:04:00-04:00
Taylor de Sa
aberfoyle antique market|antiques|food|tea|
Comments