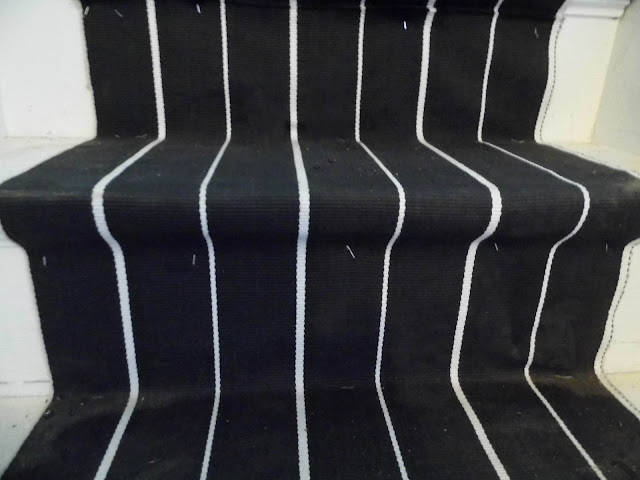 Any greyhound owner can tell you some stories about stairs.  At the track, greys live life on one level (from crate to track) so when they're rescued, stairs terrify them!  Even after years with us, Barkley is still nervous around steps.  This is largely because our condo didn't offer many opportunities to practice.

When we bought the house, we considered the stairs right away.  We knew we wanted hardwood floors but we were afraid that Barkley would never make it up and down such slippery steps.  Our budget did not have space for professional carpeting, so I looked up some easy versions of stair runners that I could install on my own.

On of my favourite blogs, Little Green Notebook, posted a great diy stair runner (Pinned here) which matched our style and budget.  It uses runners from Ikea and I was able to use four at just $24.99 a piece to cover the stairs.

Here's what the stairs looked like before.  The green carpet was not our taste and I have allergies so we tore it up right away. 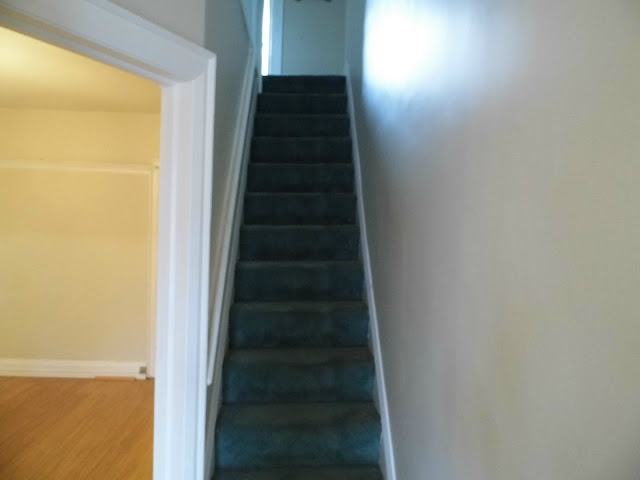 ... And by "we" I mean my friend Bonnie, who spent last Friday helping us out.  That underpadding has seen better days. 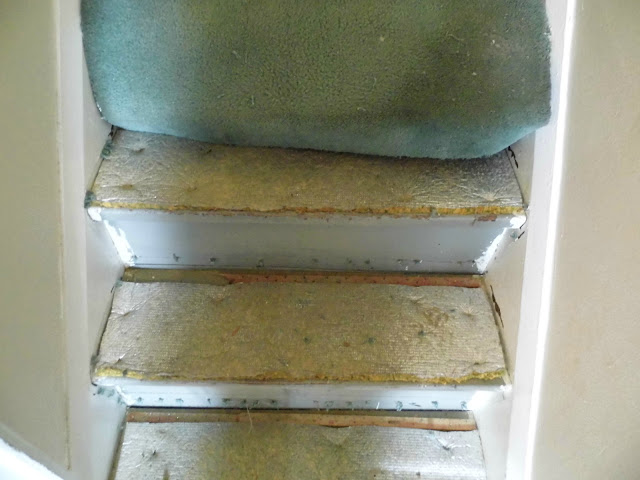 I purchased two different styles of runner to see which I preferred.  I decided that, like a man, my stairs also look better in pinstripes.  I saved the blue and white for the basement stairs since they're so bright and cheerful!﻿ 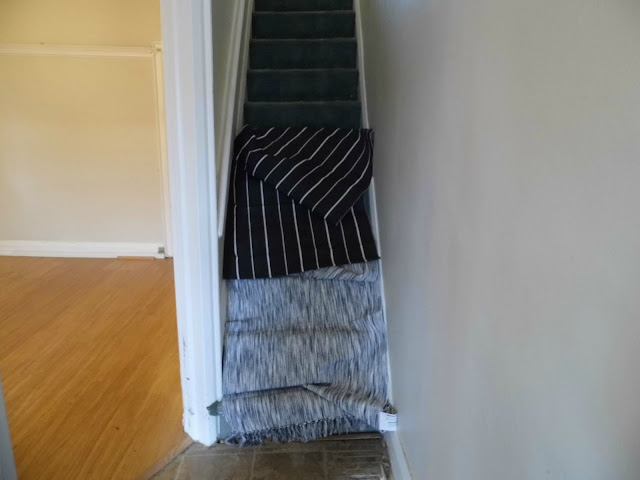 I spray painted some thumbtacks black.  I used the same rust paint that I use for almost everything since it adheres so well.
﻿ 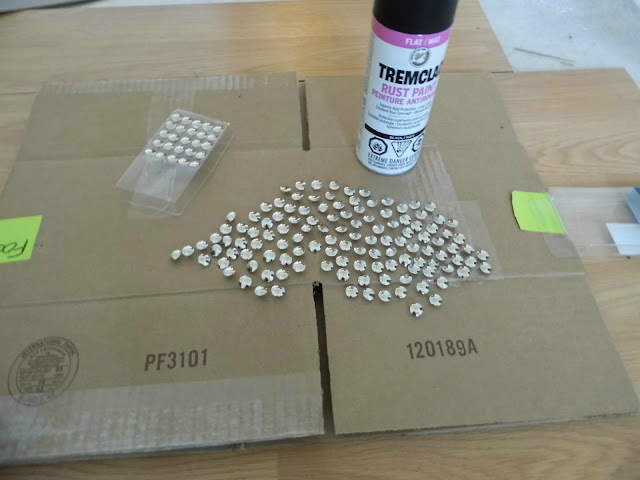 I then sanded and washed the stairs.﻿ 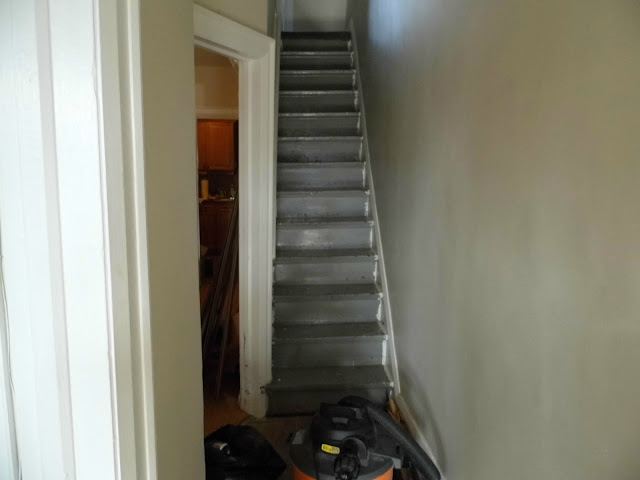 I painted the edges white using oil based rust paint.  From there, I measure my steps and cut off the seams of my runners.  Because my steps are so narrow, I also had to cut my runners width-wise.  A dab of hot glue kept them from unravelling.  I also cut a piece of a non-slip pad to sit on each stair. 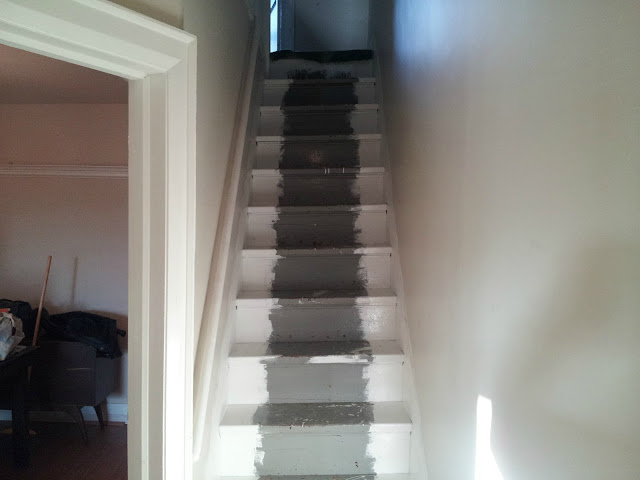 Then, I measure and mark in pencil where I want my runners to sit.  I began just under the lip of the top step and secured my runner with a staple gun. 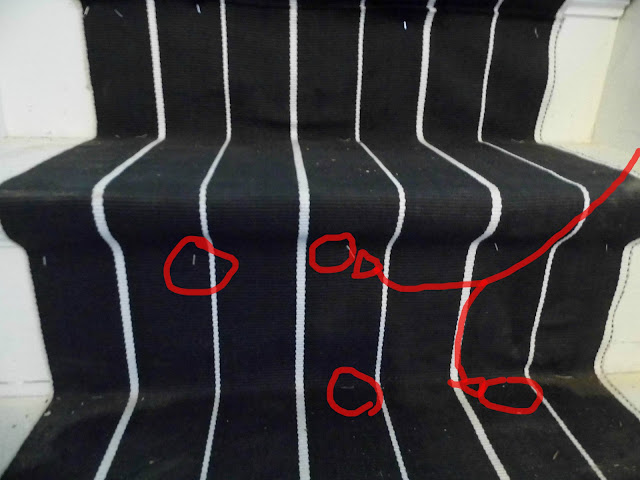 All the way down, I stapled just under the lip and then at the top of the next step as far back as possible.  I would then place a rug pad before pulling the runner over the pad and the lip of the next step.

When I came to the end of a runner, I would place the next runner just under the last completed lip and cover the "seam" of the previous runner.

The steps are a little dirty in this picture (sorry) but I don't want to clean and touch up my paint until we've installed our central air since I know contractors will be up and down the stairs quite a bit over the next few weeks.

I used the black thumbtacks to hammer into the tops of the steps.  I used three on each side of ever step. 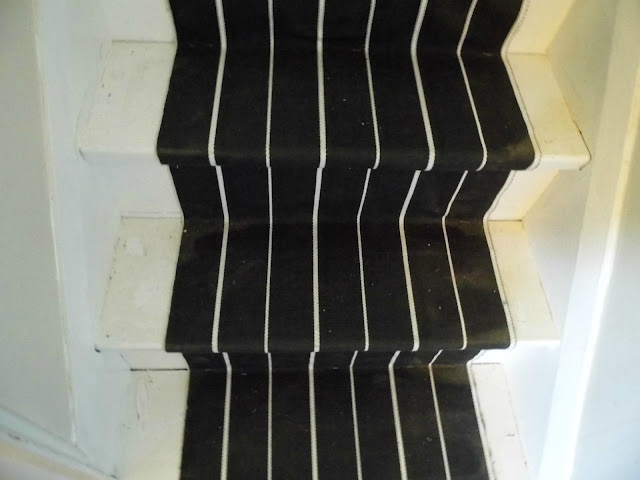 In the end, the staples showed a little against the black.  I touched them up with a little nail polish. 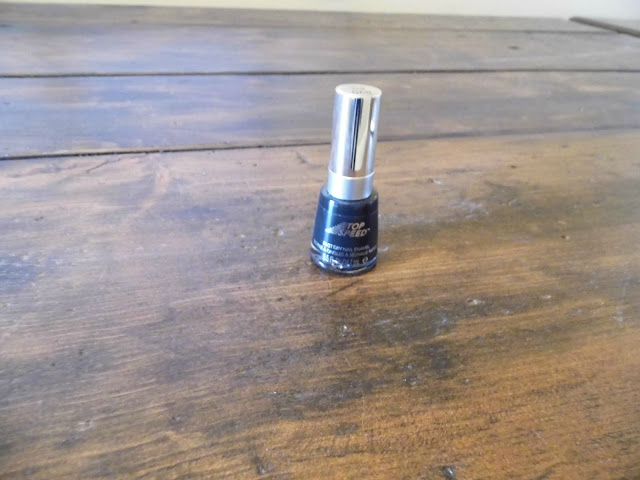 The finished product is attractive and safe for Barkley!  They're not perfect but our stairs were slightly uneven to begin with.  Perfectly imperfect... Just like us!  What do you think?  I think they even make the stairs look wider! 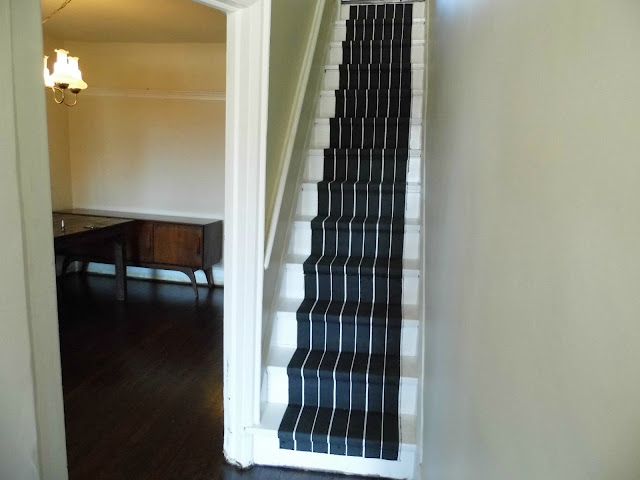 And since this was a project inspired by copied from something I found online and "Pinned" I've submitted it for the Pinterest Challenge.  Be sure to check out the hosts, who will have links to many other great projects:
Katie from Bower Power
Emily from Sparkle Meets Pop
Renee from Red Bird Blue
Sherry from Young House Love