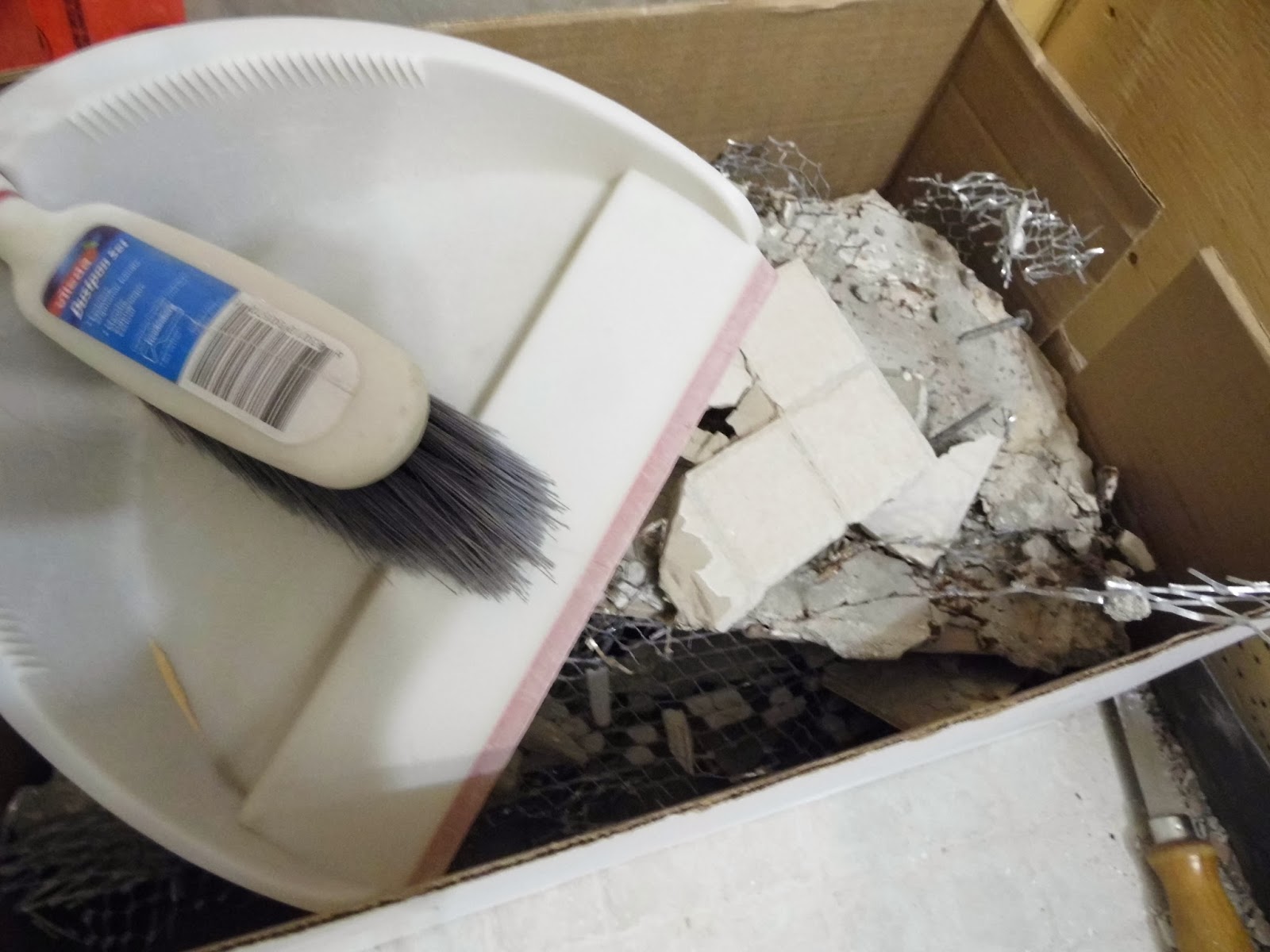 I was going to call this post "a quick washroom update", but that title sounded a little... impolite.  For those of you who don't follow the blog regularly, I feel the need to specify that this is an update on our renovation progress and not on anything else that may happen in our washroom.

As you know, this washroom reno has been postponed and prolonged due to busy work schedules and just life in general.  However, I reminded Corey that on April 25th, it will have been a year since we enjoyed the comfort of a proper shower and so we are feeling motivated to finish and resume some normalcy in our day-to-day lives.

The next task is pulling up the old floor... 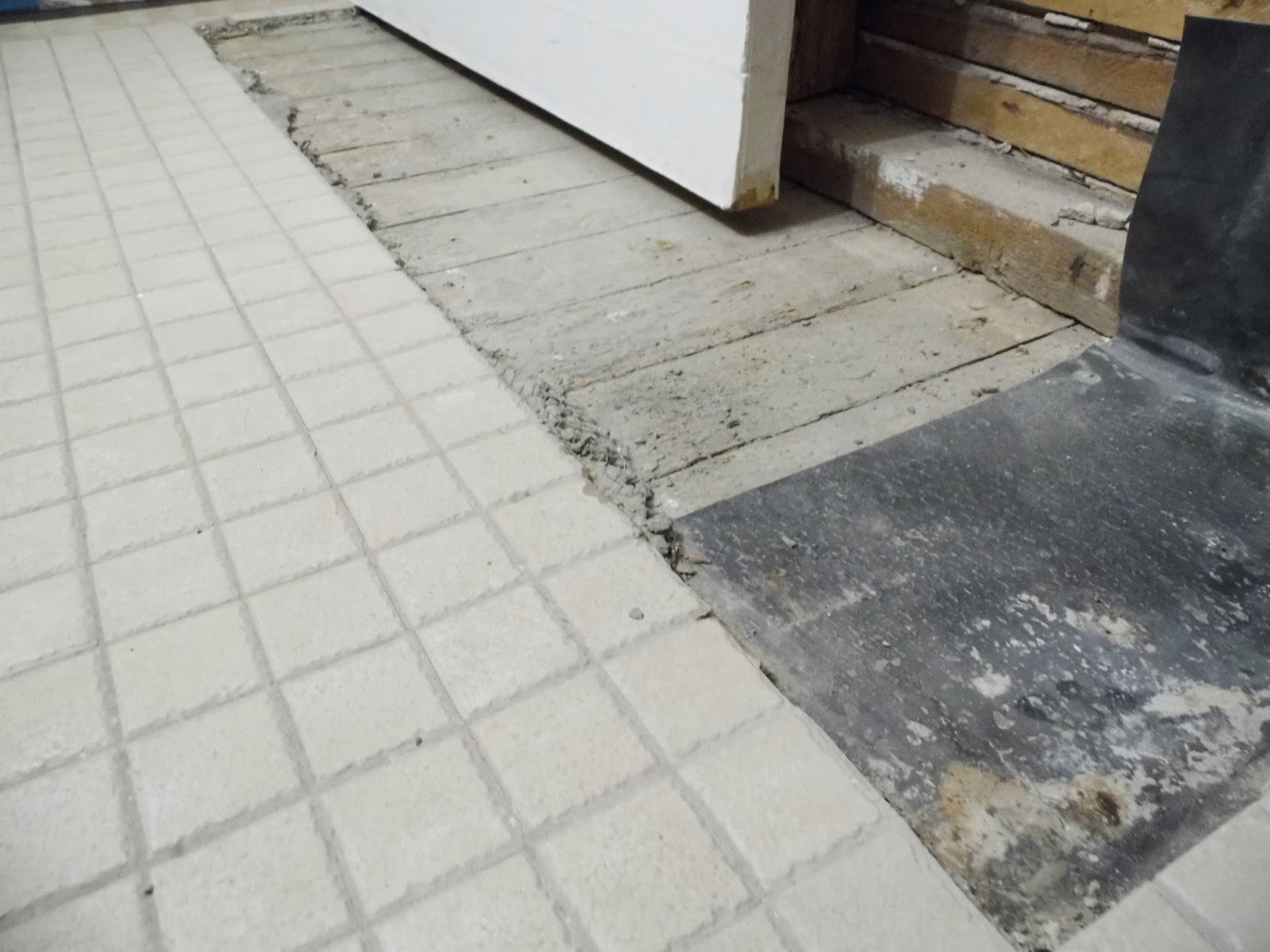 Corey's been doing a little work each night and he recently discovered that the floor under where our tub will go was reinforced with poured concrete.  Because we want to start from scratch and ensure that the floor is strong enough to hold our extremely heavy tub, that means pulling up about two inches of concrete.  Yikes!  I suppose we shouldn't be surprised that even the demolition won't be easy! 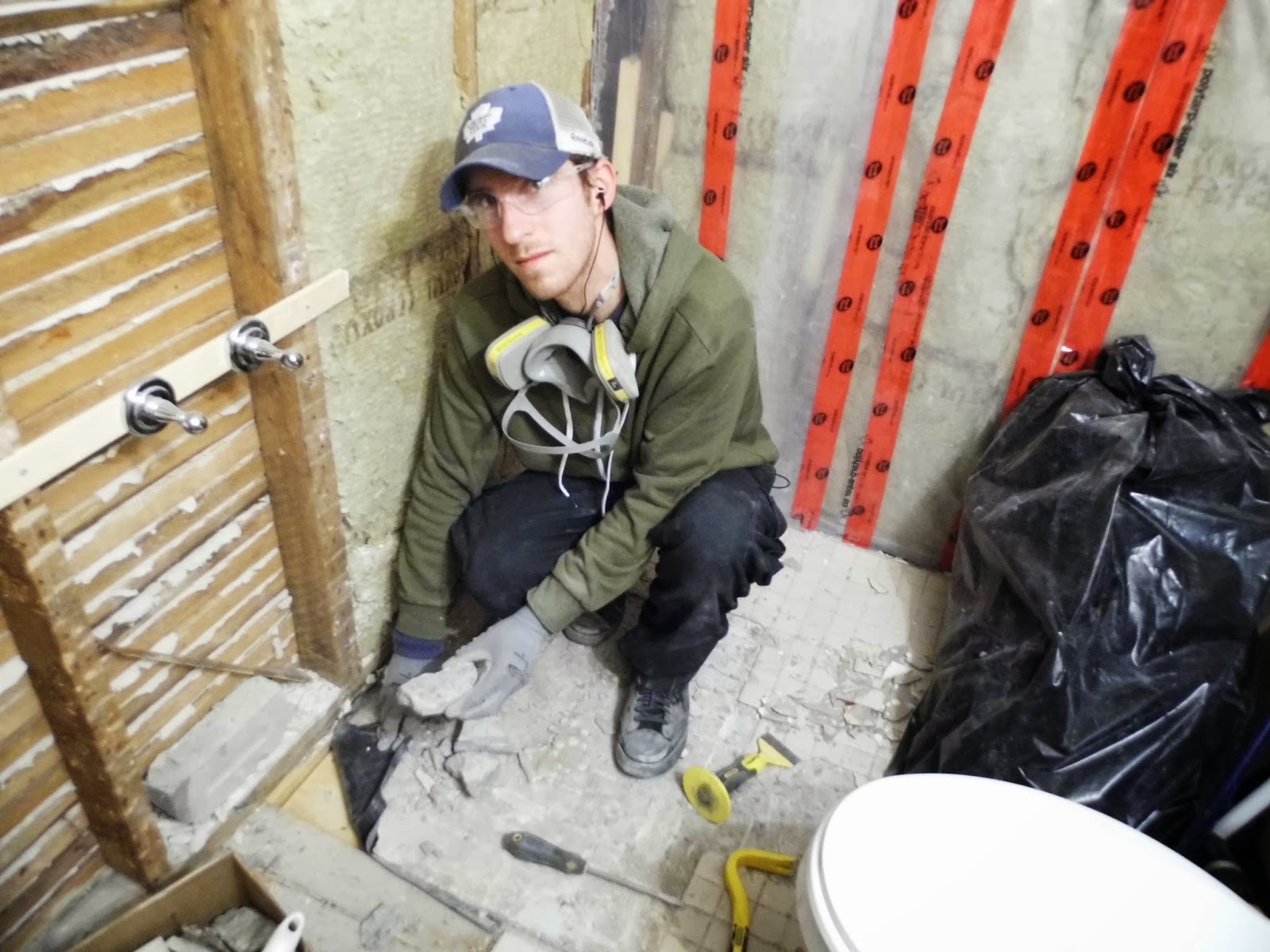 As you can see, the concrete has been almost completely removed and all that remains is the rubber membrane.  It looks like it's time for another trip to the dump... 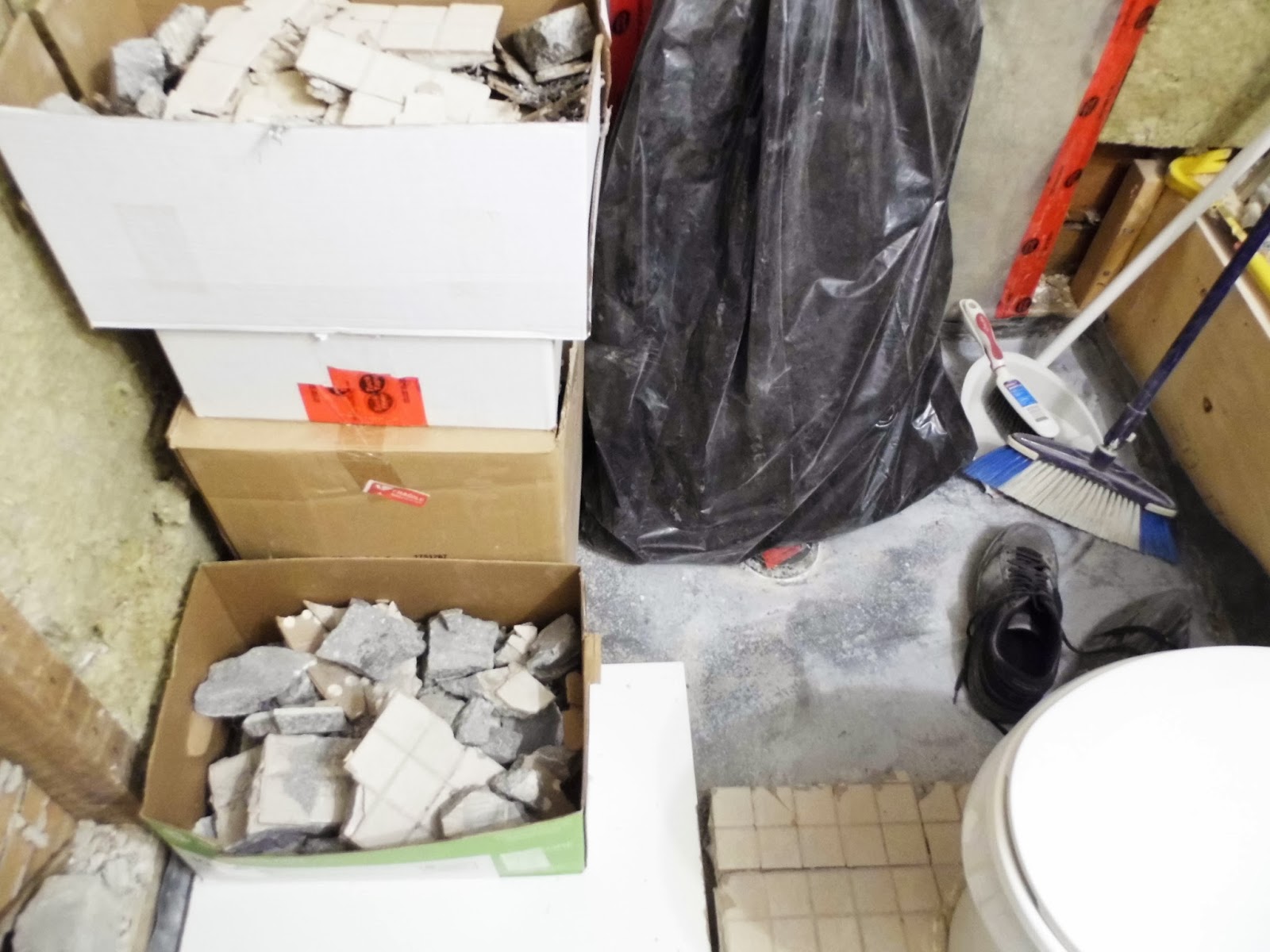 I hope to have even more progress to show you next week!

Do You Have (Or Would You Ever Get) a Tattoo? 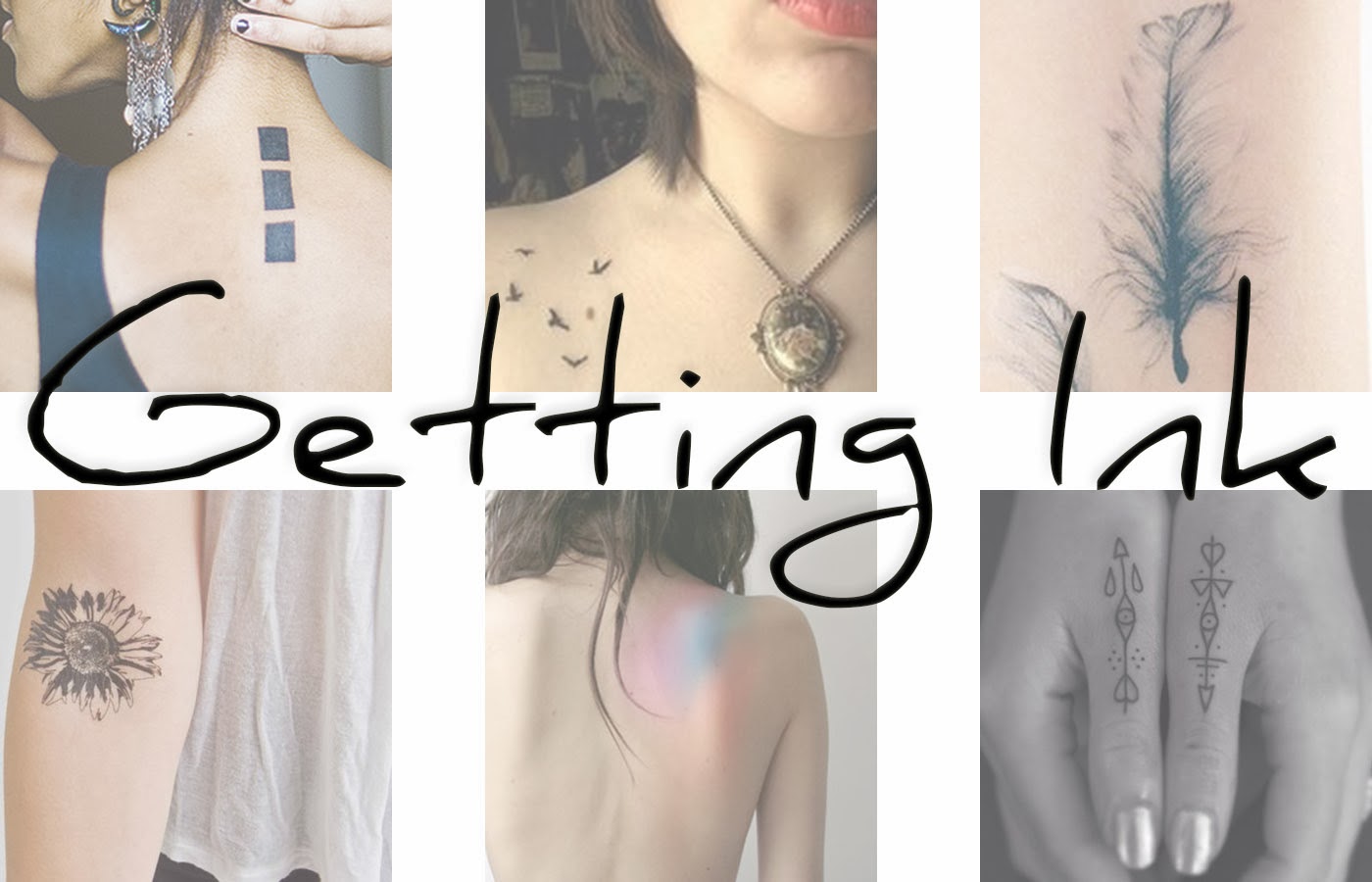 Would you ever get a tattoo?  Do you have one already?  What is it?  I'd love to know!

Corey's always wanted a tattoo but I've been talking him out of it for years because it seems so... rebellious!  I've never really been a (visible) tattoo girl... probably because I'm too chicken!  I often admire them on other people though.

I remember back in high school when a couple of my friends turned sixteen and got their bellybuttons pierced.  I thought they looked so cool!  Then I remember some of my friends getting tiny studs in their noses and again, I thought it was such a feminine and delicate look!  Still, I refrained from getting any tattoos or piercings of my own because my "good-girl" inner voice would shout things at me like: "But what if people think you're wild or not smart... or not serious enough?" or "People won't take you as seriously and they may not respect you as much." or, (My personal fave) "People associate those things with drug culture.  Do you really want people to think you're on drugs?"

I am laughing at myself as I type this but those are the real things I have told myself each time I thought about getting a little tattoo to commemorate a special milestone or life event.  But by now I know all those things I told myself in the past are rubbish.  I know who I am; I am proud of my values and my work speaks for itself.  Tattoos have also become much more mainstream and accepted in recent years, which makes it a little easier to give myself permission to get one.  I finally feel like I'm in a position where if I wanted to get a little "ink" I could... Which is a bit of a milestone in itself, isn't it?  It's so nice to finally feel that I don't need to pigeonhole myself into choosing a specific outward look just because it "matches" how I feel inside.

As many of you know, Corey and I are art lovers and we often follow new-ish artists and fill our home with art that we love.  The closer we get to our wedding, the more I've been thinking that it would be fun to do something wild and unexpected together and we've been toying with the idea of getting matching tattoos... perhaps something creative and unique. Think of it as a little pre-wedding bucket list item.

This is the point where my mother will probably call me as she reads this post.  Hi Mom!  I promise that if we do it, it won't be anything too crazy.   Honestly, you may even like it.  xo  :)

And it's not just my mother who may feel compelled to call me to weigh in.  Tattoos are often perceived with some controversy by many people.  While we're only contemplating this permanent form of body art, we have definitely considered the "What will people think?" factor.

In the end, we've decided that we're really not very concerned with what other people will think and have chosen discreet locations so that we can cover them very easily.  We've also agreed (it's a miracle!) on a design and artist in case the mood should strike us one day.  This is exactly the kind of planned spontaneity that we like and it's kind of exciting to have it all planned and yet not know for sure if we'll ever feel the urge to actually go through with it.

We're sort of saving it as something that may or may not happen one day (on a rare occasion when neither of us is working) and it's fun to think that we could just wake up, look at each other and say "Let's get tattoos today!"

I'm secretly hoping we'll end up doing it.  Can you tell?  Corey and I are usually pretty conservative so it would make us feel kind of wild to do something so off the beaten path!

So, let's talk designs!  There are so many lovely ones all over the internet.  I tend to like geometric or nature inspired designs, while Corey prefers something with a secret or hidden meaning.  The idea we have in mind satisfies both of us, but here are some other fun ideas:

These birds look so delicate! 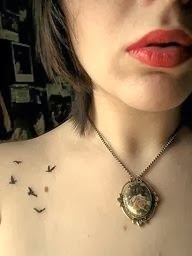 I have never seen anything like this rainbow tattoo!  I think it would be neat for one person to get a geometric prism tattoo and the other member of the couple to get this as a coordinating piece! 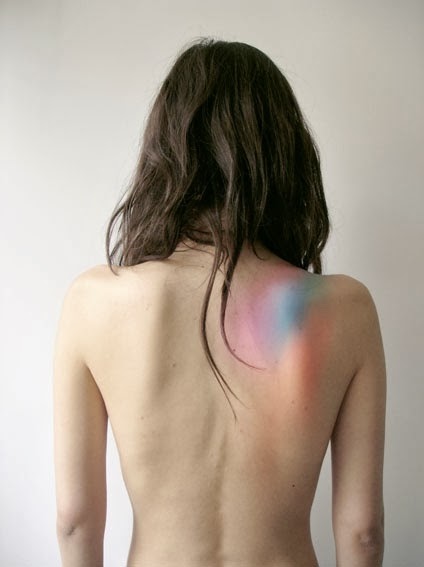 I tend to think feathers are overdone, but these are so wispy and light that they look like they could actually float away! 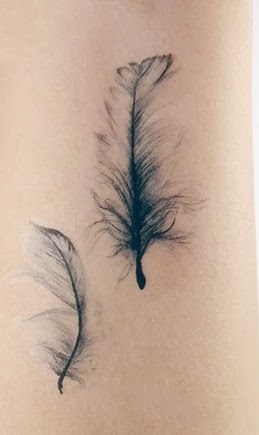 I love simple designs made up of shapes and lines in black or grey. 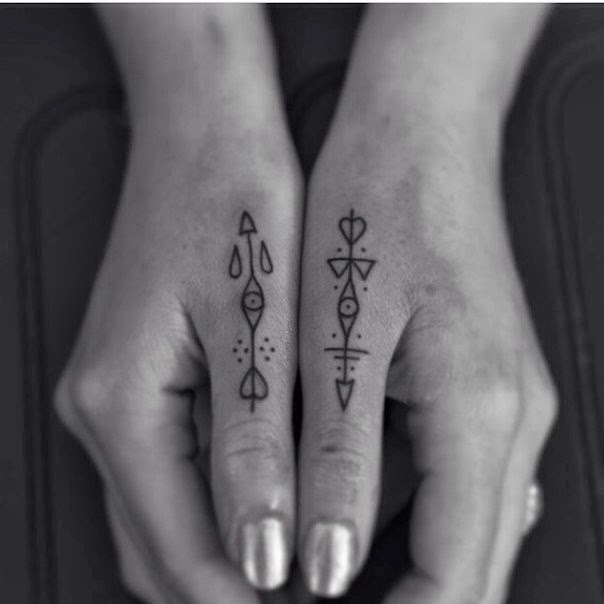 Not only do I love the simplicity of this geometric tattoo but I love the way it plays with colour saturation. 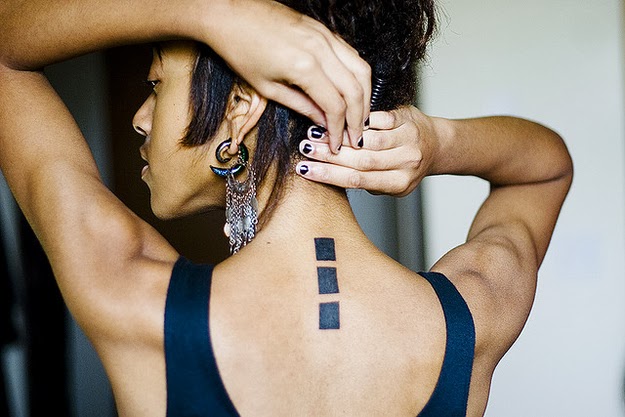 The placement of this tiny tattoo makes me smile... as does the kitty! 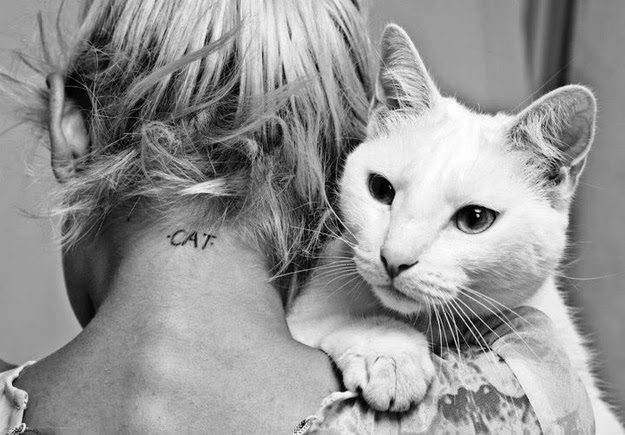 This white lace tattoo is so delicate that it almost looks like jewelry.  I love this idea but I don't quite trust the white ink because it fades on many people.  White ink tattoos are trendy right now and they can be subtle and stunning, but many artists refuse to do them because they can be so unpredictable. 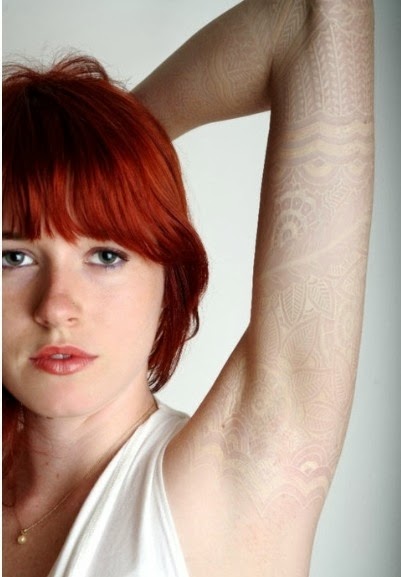 This sweet little bird looks like it stepped out from the pages of a story book! 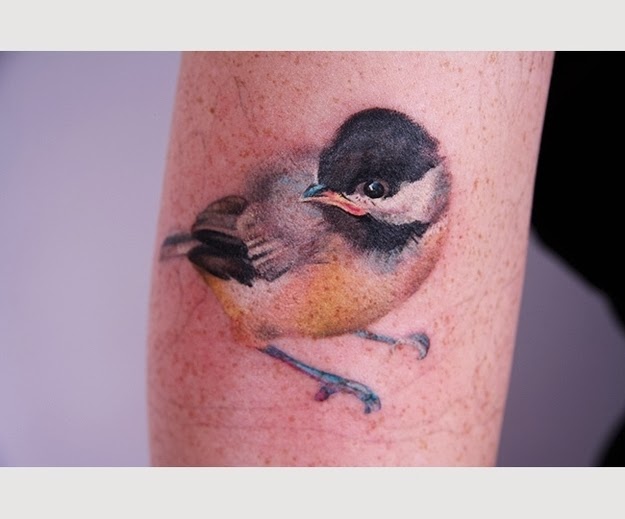 I love the shading on this flower!  It almost looks like a black and white photograph. 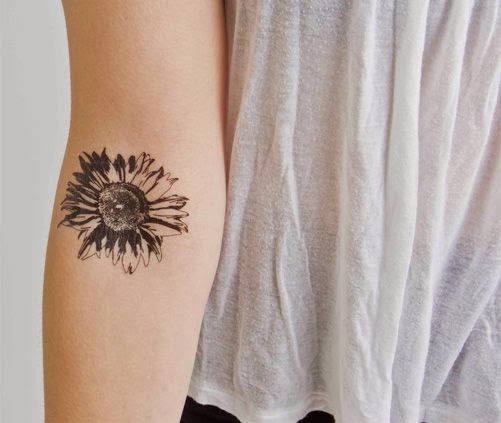 This isn't a tattoo but I love the combination of colour, geometry and nature in this hummingbird print!  Wouldn't it make a pretty tattoo? 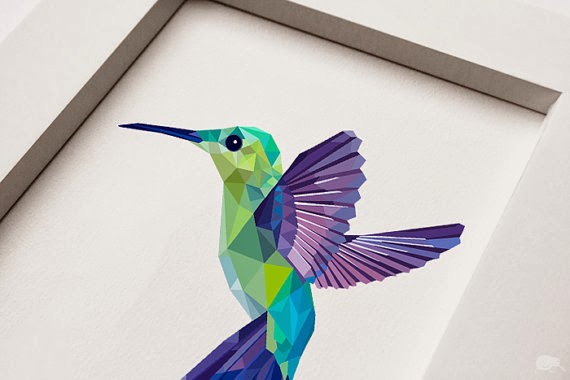 I find that people's reactions to tattoos fall somewhere on a wide spectrum.  Historically, I've been of the mindset that I like the odd one but not for myself, although lately that's been shifting.  Where do you fall on the spectrum?  Do you think we're crazy for considering it or wussies for taking so long? ;)

I've always wondered if I missed the boat (so to speak) on some of these rebellious milestones but now I think it's never too late.  Would you ever consider getting a tattoo as a (no-longer-young) adult?  I can tell you that even just giving ourselves permission to do it has spiced life up a bit- Both as individuals and as a couple!

Would you ever give yourself permission to do something just a teensy bit crazy?

Email ThisBlogThis!Share to TwitterShare to FacebookShare to Pinterest
Labels: bucket list, general interest, life at home, relationship, tattoo, us, would you get a tattoo 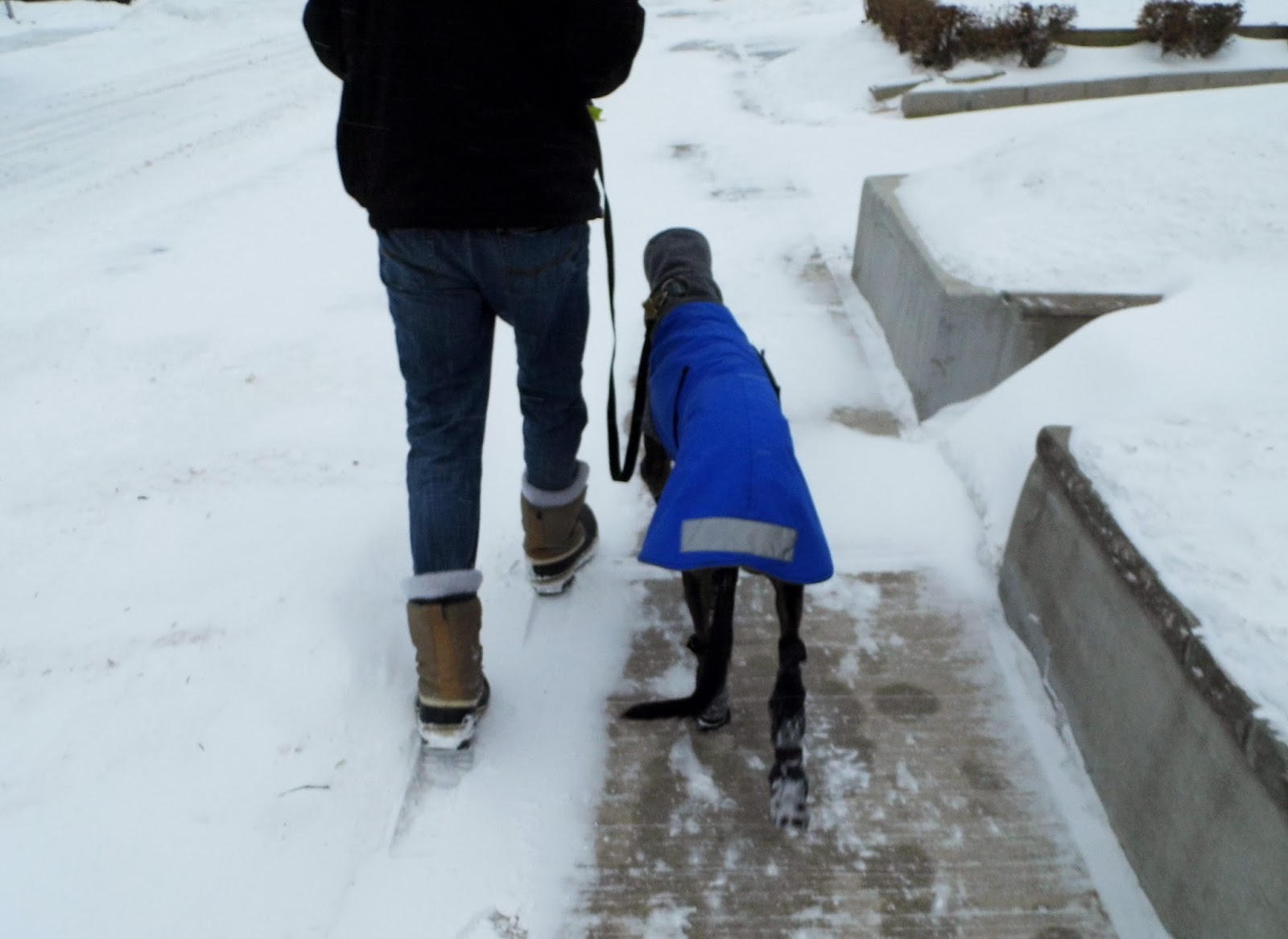 How was your weekend?  Ours was pretty great!  When I wasn't working, Corey and I were enjoying some "date time" together and we tried to get outside in the snow as much as possible.

On Saturday morning, we bundled up and took Barkley for a walk along the belt-line trail. 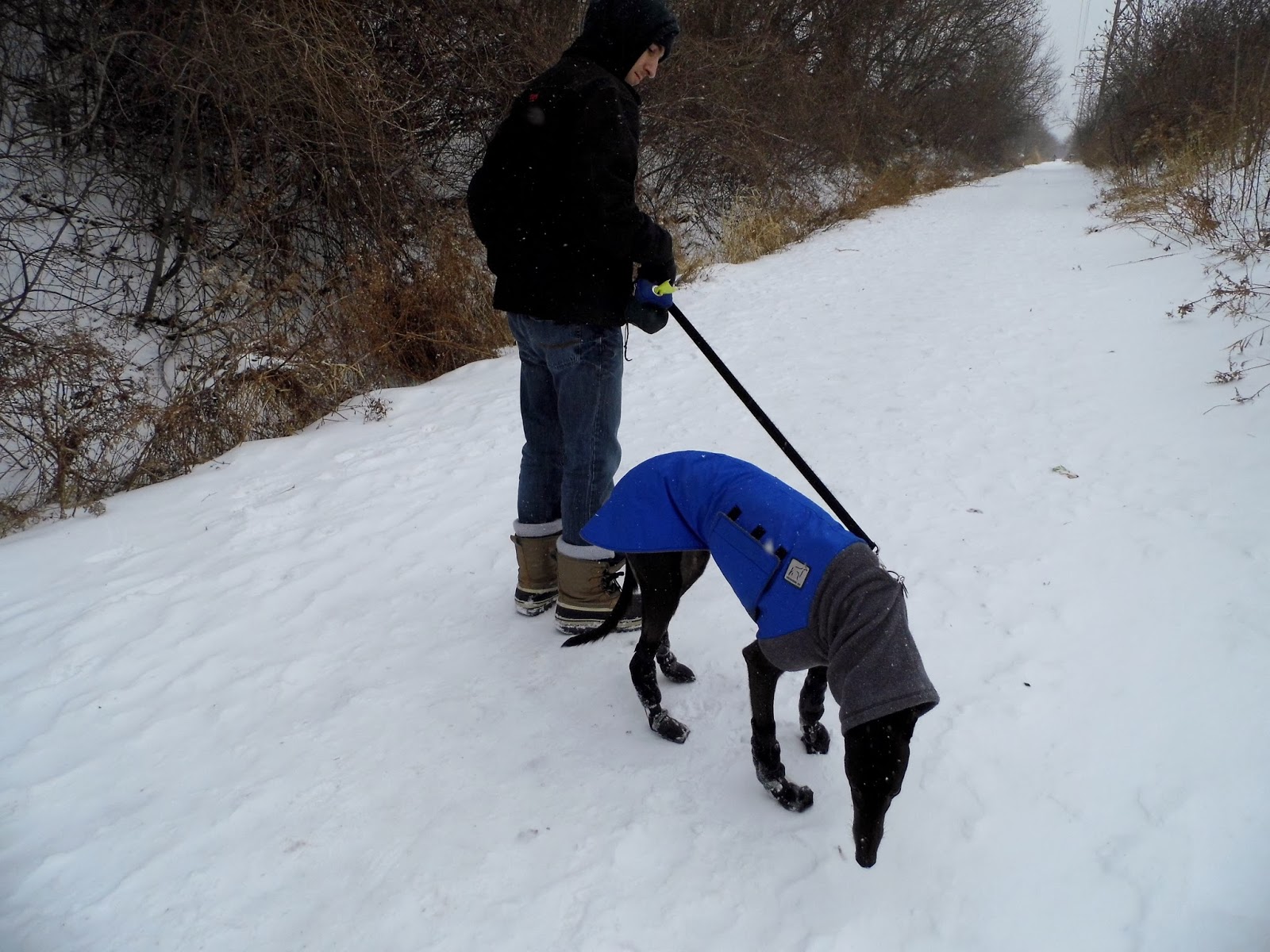 I'm not going to lie- The Bark sort of hated it and endured it with a facial expression that made him look like a martyr.

Still, the trail was pretty in a sparse wintery way and Corey and I enjoyed a little hike. 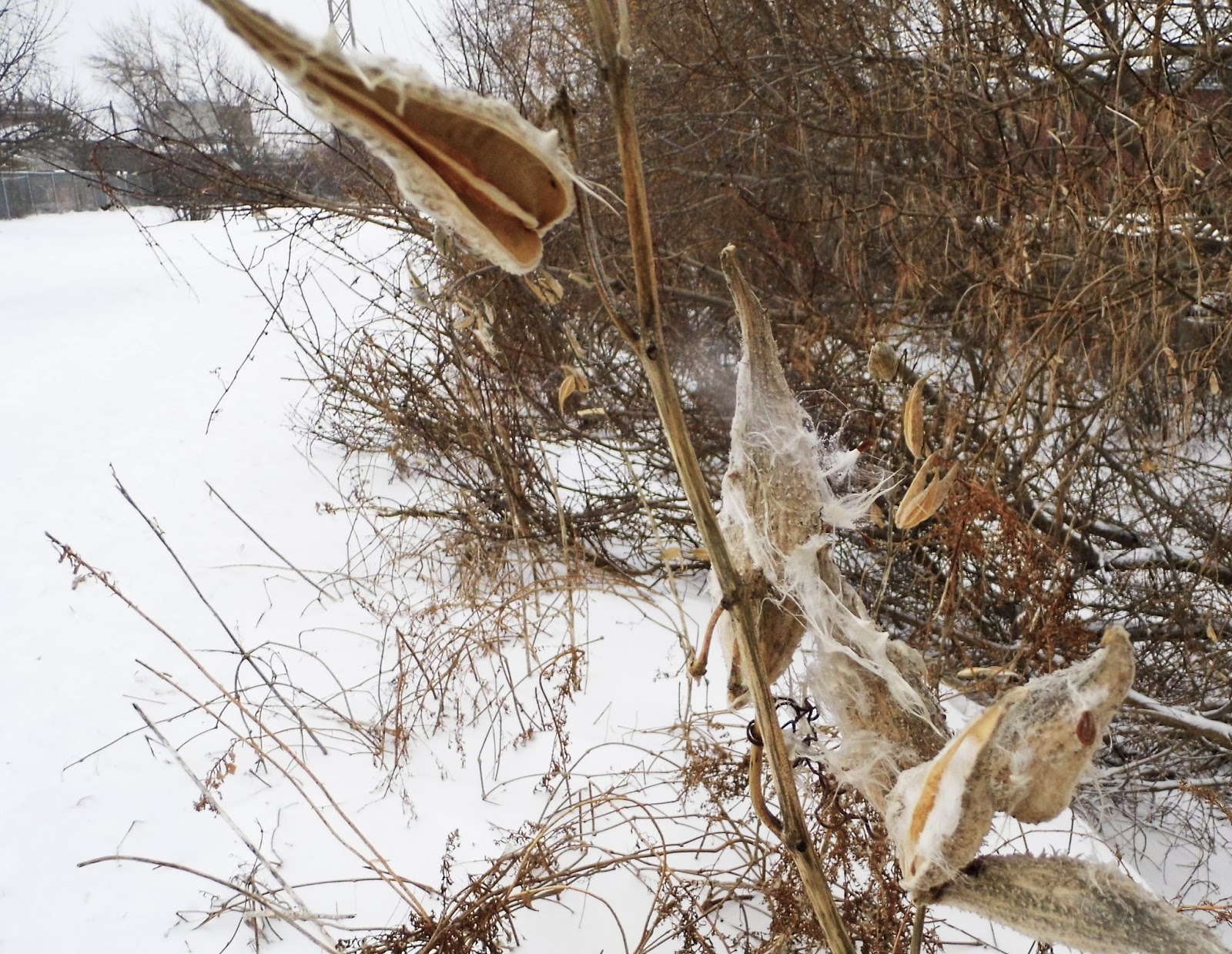 The dull grey scenery made the graffiti on some of the nearby buildings look extra vibrant! 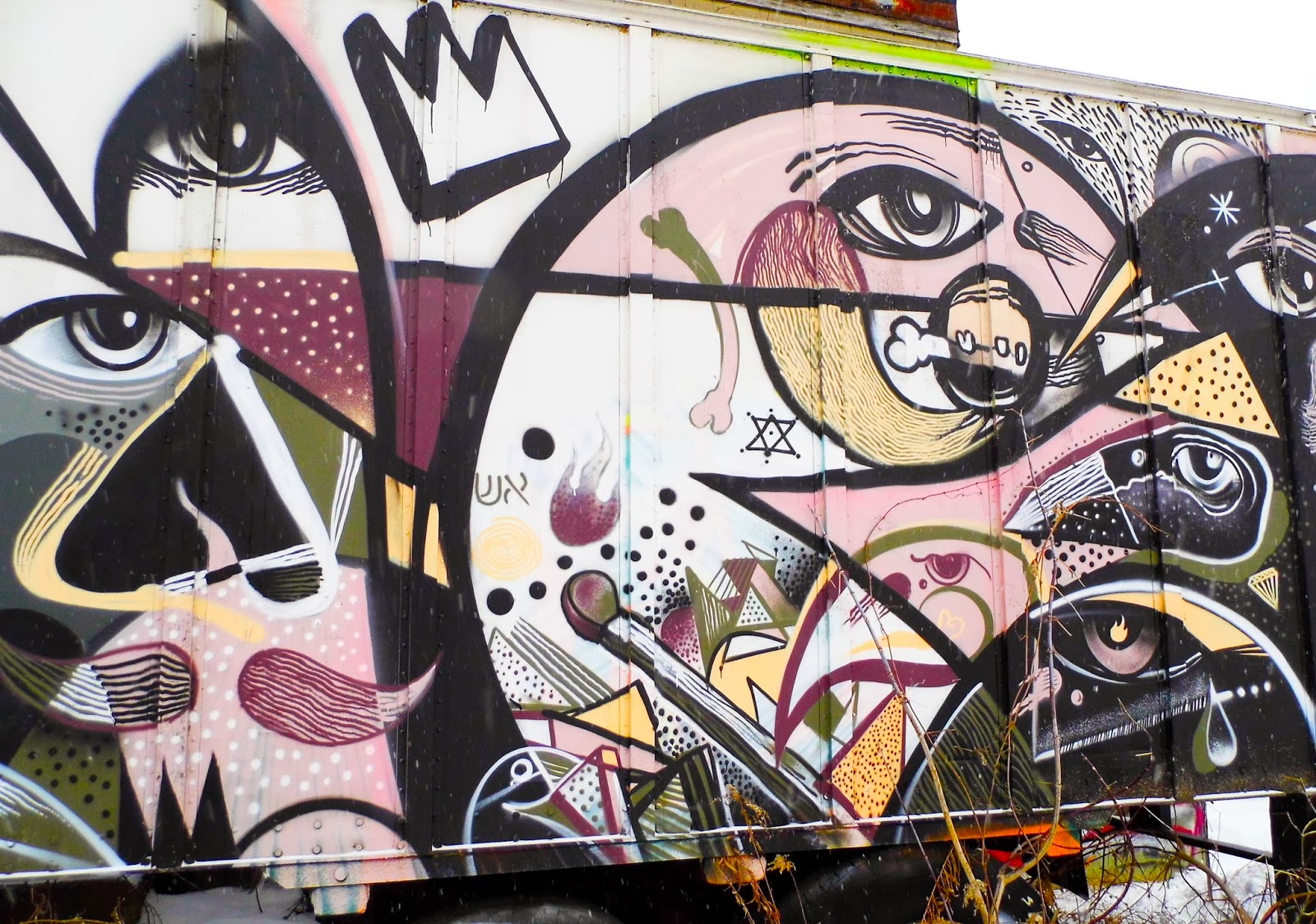 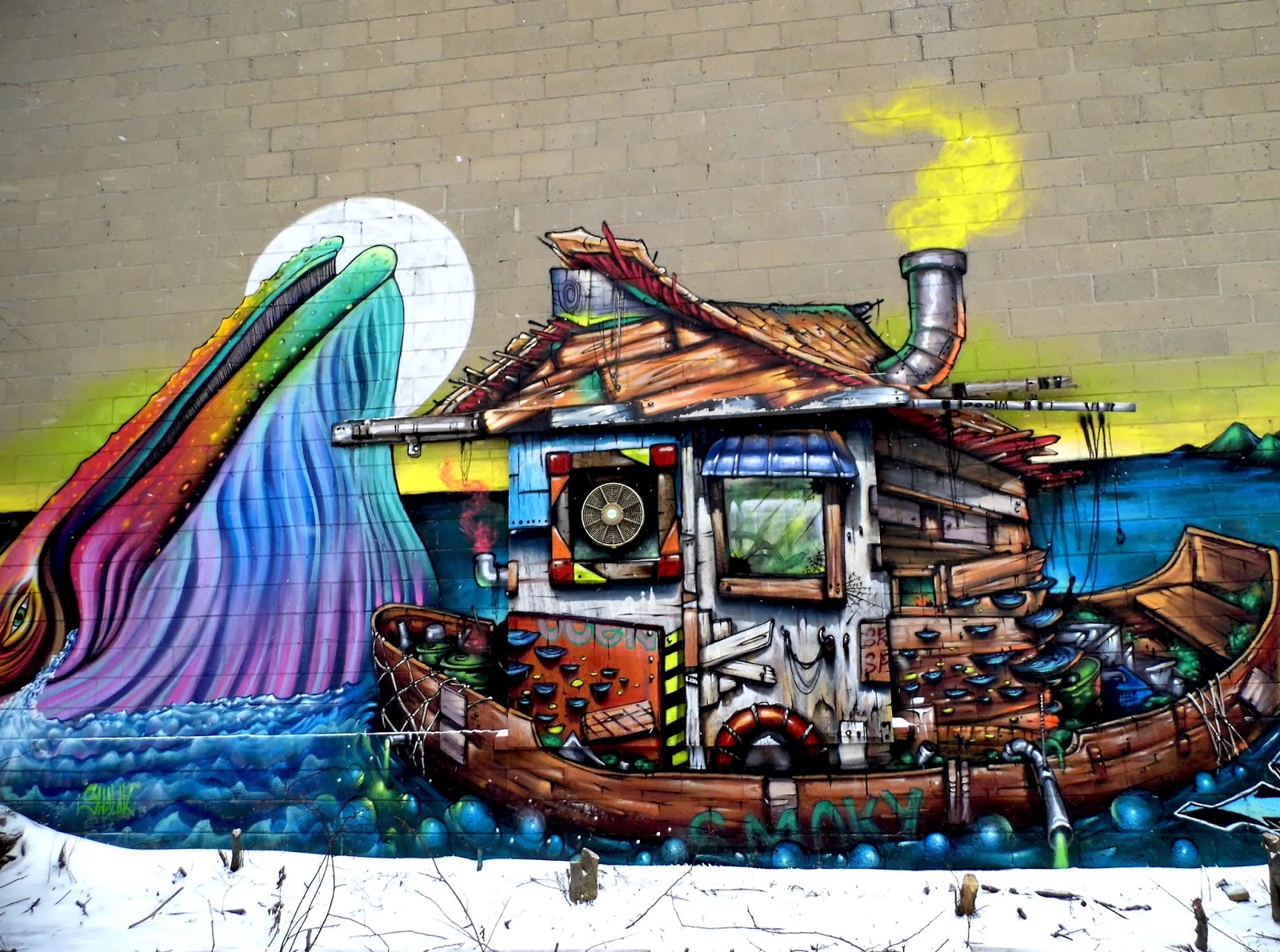 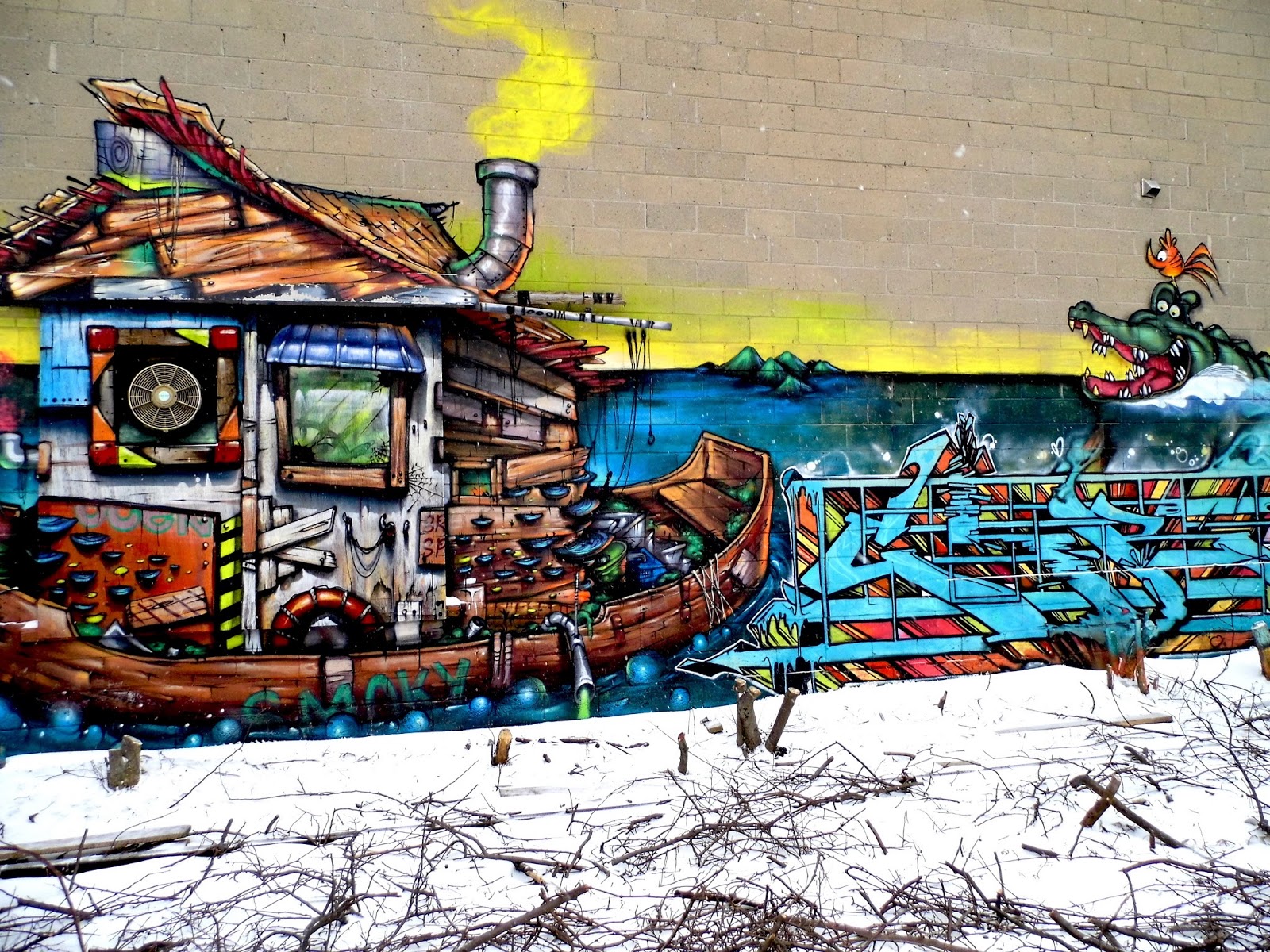 I'm afraid Barkley didn't appreciate the sights quite as much as we did.  This is his "Take me home!  TAKE ME HOOMMMMEEE!!!" face. 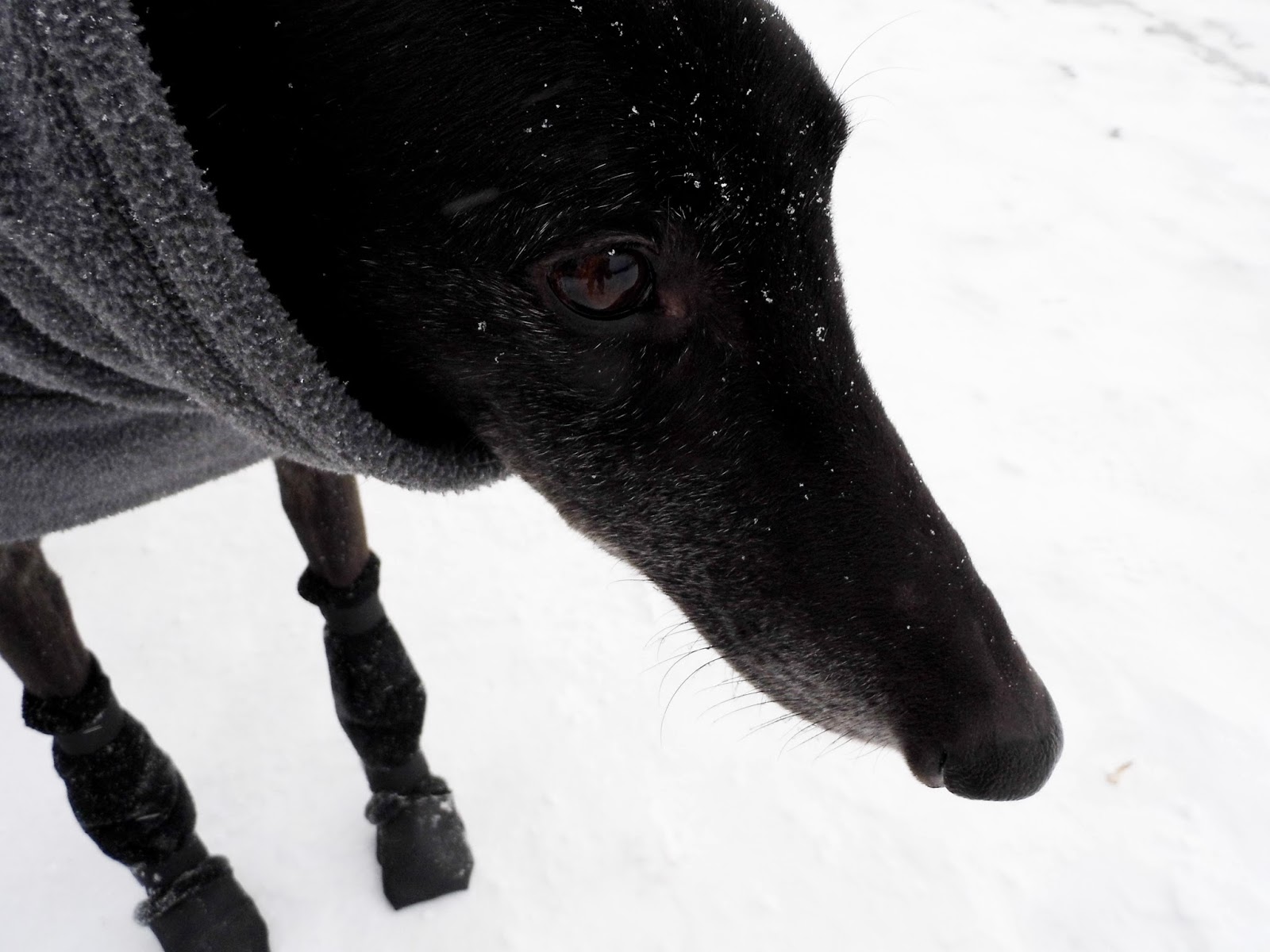 After the walk, Barkley warmed up with a (naturally shed) caribou antler and lots of cuddles!  Who else has a pet who's reluctant to go outside in the winter? 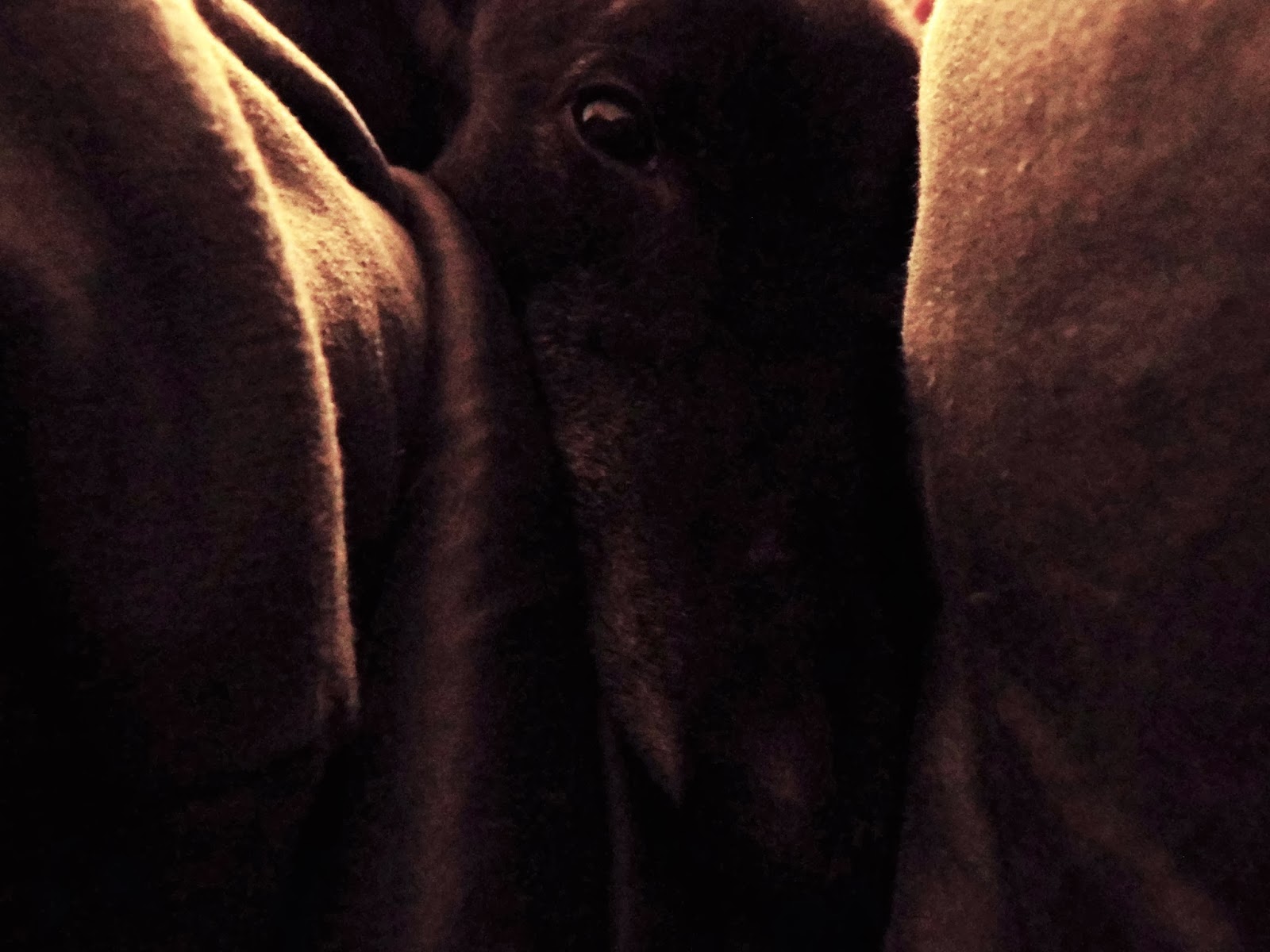 Did you have a good weekend?  Did you do anything outside?  Where is your favourite place to walk?

Check out these stunning winter photographs.

Here are some of the best hiking trails in and around Toronto. 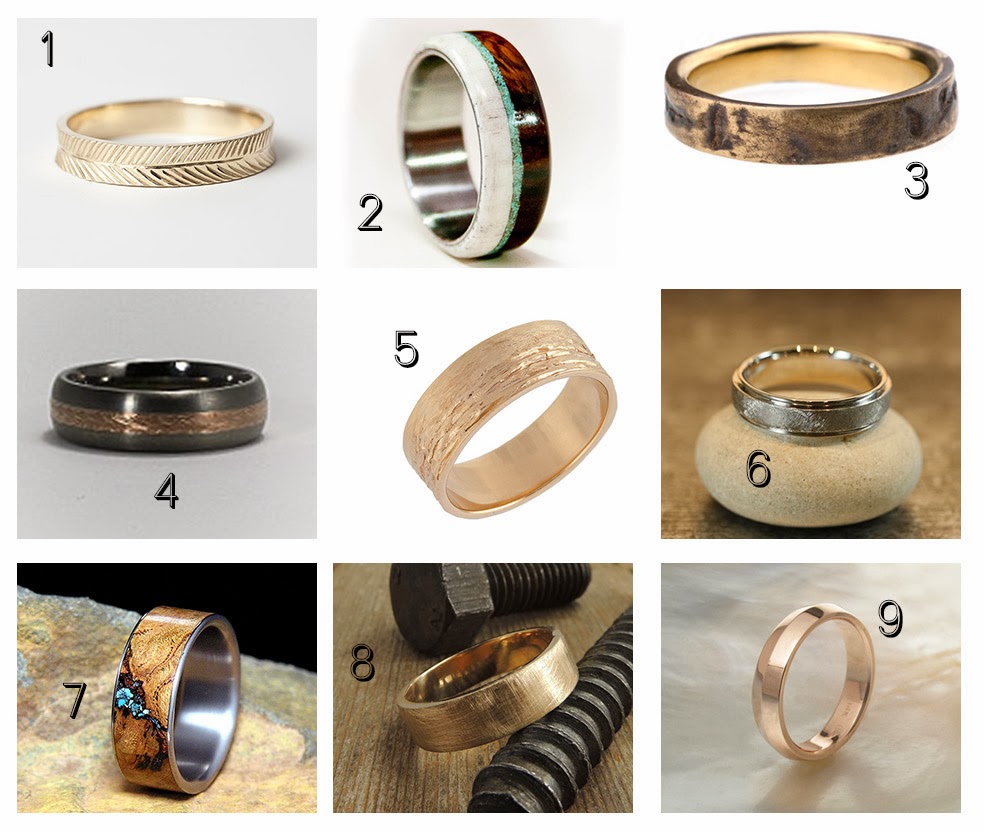 One of the most surprising aspects of wedding planning for me has been Corey's level of involvement.  (I jokingly call him Groomzilla, but I secretly like that he cares so much!)  Not only is he opinionated (usually in a good way) but I've been touched to learn that he actually has a vision for our wedding and has spent time thinking about many of the details, like what we might wear or how our photos would look.

Initially, I was shocked to find that my boyfriend (who builds things, watches sports and is rarely clean-shaven) actually cared about our first dance, colour scheme and catering menu but I have spoken with many other women who had the exact same experience.  While I was a little annoyed at first when I learned that I would have to share all the decisions, now I think it's really sweet that Corey's so excited and involved.

We've recently been thinking about the type of ring that he may want.  Because he works in the electrical field, Corey can't wear his ring at work and we were initially looking at beautiful (and more fragile) rings which incorporated wood inlays.  We also considered some really cool (and affordable) tungsten and titanium rings, which come in many different styles and look ultra modern.  I think we have finally decided to stick with precious metals though, since Corey would like to option to re-size the ring if his fingers get thicker.

Since I have such a unique engagement ring, Corey decided he'd like to follow suit and get a twist on a classic style.  We're not expecting our rings to match (since we're so different) but we are thinking about matching the gold (either white or rose) in his ring to the gold I choose for mine.

While browsing, I was struck by all the beautiful and masculine choices available for men's rings.  Some of my favourites are above and this simple black gold ring (below) gets an honourable mention. 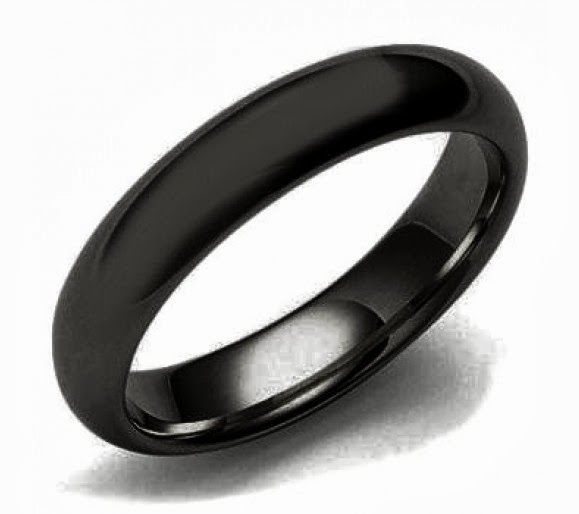 What do you think about non-traditional men's rings?  Would you choose something a little different or do you prefer a simple band?