Okay, so it wasn't exactly a date night but I thought the title would be funny considering where we ended up this evening.

As you know, we've been removing old flooring in order to expose the hardwood underneath in our new/old house.  The ugly side of renovations is the garbage... and here's a shot (below) of our porch filled with carpet, tile, laminate, parquet.,. you name it!  Yikes!  We didn't want to be "those people" with a porch full of junk so we decided to rent a truck and head to the local dump.

I'm documenting this with photos because my family and closest friends, if asked about my biggest phobia, would probably say "garbage" without hesitation.  I have been known to cry a little when emptying kitchen garbage and a trip to the dump would probably rank on my list of "worst nightmares not involving serious catastrophe".  Still, this is my renovation too and I want to be a part of every aspect of it so I told Corey I'd join him when he went to dispose of our debris.

My mom has already said that I deserve some kind of garbage award for overcoming this obstacle.  I asked her if the award would be made out of garbage and she laughed and asked how I knew.  Hardy har har.

Tonight made me remember one of my first jobs at a popular restaurant chain.  I had to wipe down the tables and I kept wanting to wash my hands and asking for a clean rag.  Everyone laughed at me and said I was a princess... If only they could have seen me tonight!

Anyway, I actually found the whole garbage experience to be kind of fascinating.  First of all, everyone who works there (or at least everyone we met tonight) is kind of mean.  We decided to give them a break... because the smell would get to me too.  We tried not to let them bother us too much during our adventures in garbage land.

First, you drive onto a scale.  They make you pay a deposit based on how much you think they have... Or it could be based on how little they like you.  We made two trips tonight and the guy manning the booth actually doubled our deposit amount on our second trip for no reason.  I guess he didn't like the look of us. 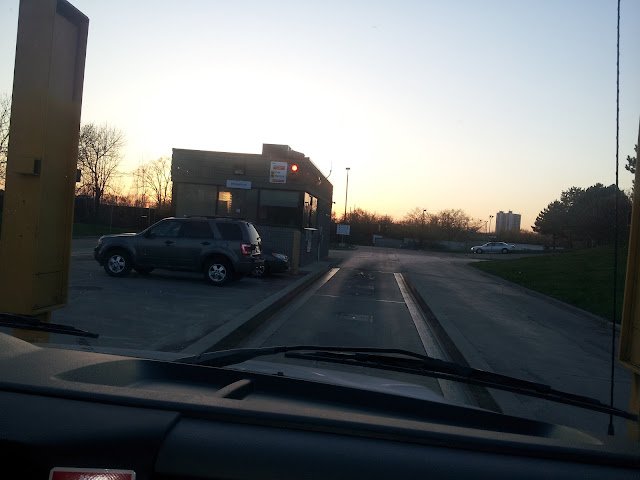 Once you have paid, you drive into a huge open building, back you truck up along side all the other trucks and just start tossing your garbage into a giant pile.  It is disgusting and smelly but also kind of rewarding to get rid of all of that garbage.  It is literally just a giant room with a mountain of garbage.  There's nothing pretty... no chance to salvage some antique dresser that someone threw out... Nope, just garbage. 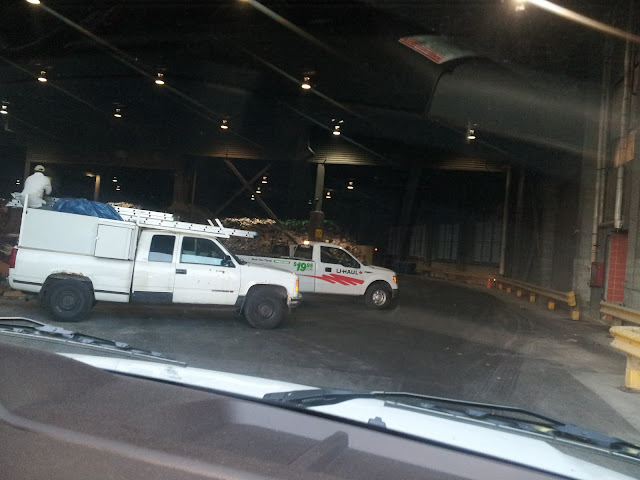 I had to be sneaky when I took these pictures because one of the garbage supervisors yelled at me for taking a picture and insisted that I delete it.  I hadn't seen any signs prohibiting pictures (actually, that probably isn't a big issue for them since I'm the only weirdo who would actually photograph this kind of thing) and when I asked him why pictures were forbidden, he couldn't give me a satisfactory answer.  I mean, what could be happening there that they don't want us to know?  It's not like we had been granted any special access backstage.  I was still debating whether to start an argument because he was infringing on my rights or to tell him that I needed the photos to prove to my therapist that our garbage exposure therapy was working ... when Corey (always my voice of reason) whispered that I should drop it because we really just wanted to dump our trash and leave.

So we dumped our garbage and they weighed the car on the way out so we can pay.  All in all it was anticlimactic... for a trip to the dump.  There were other people there... even a girl in ballerina flats who made me feel less silly for wearing UGGs.  Watching her stand there while her guy did all the work made me feel proud to be helping toss that nasty old tile onto the junk pile!

We did manage to learn one interesting fact.  My background in science means that I am always interested in quantitative data.  We've been saying that ripping up the floors was A TON of work... but would you guess how much debris it produced?  ... 1,060 kilograms!  That's right: just over one metric tonne!  Who would have thought that it literally was a tonne of work!?

By the way, the alternate name for this post was " Wow, this place is a dump!" but I thought it was too obvious.  The floors are finally done: pictures tomorrow!