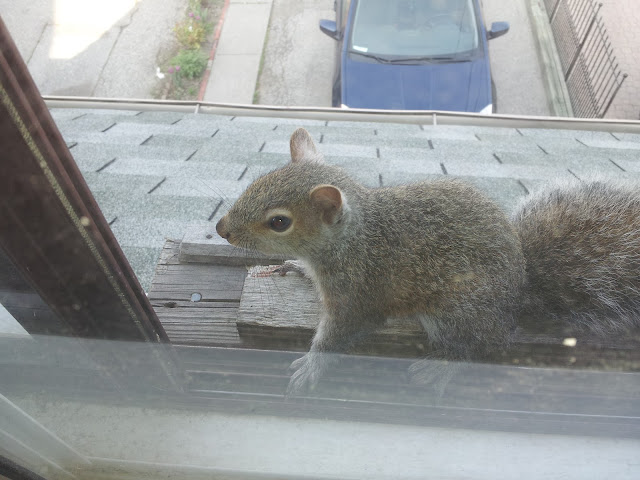 So... Who knows a good recipe involving squirrel?  ... Just kidding!  You guys know we're HUGE animal lovers and would never eat something so cute and curious.  But we do need to talk about the squirrels.  Again!

Two squirrel posts in one week is totally uncool, I know.  But they've been waking us up with their scratching at our window and our patience is wearing thin.  This morning sounded like a full out assault on our bedroom window!

Does anyone know of any HUMANE ways to get rid of these critters?  At least the raccoons and skunks seem to stay away due to Barkley but the squirrels are bold enough to tease him.  I'm beginning to think we should just embrace the situation and keep them as pets.

How would they look in squirrel size versions of one of Barkley's coats? 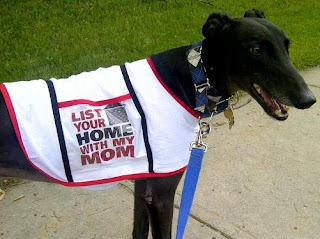 Corey thinks they have a nest somewhere in our yard.  Still, I can't get too mad at the little rascals because they're so darn cute chilling on our porch. 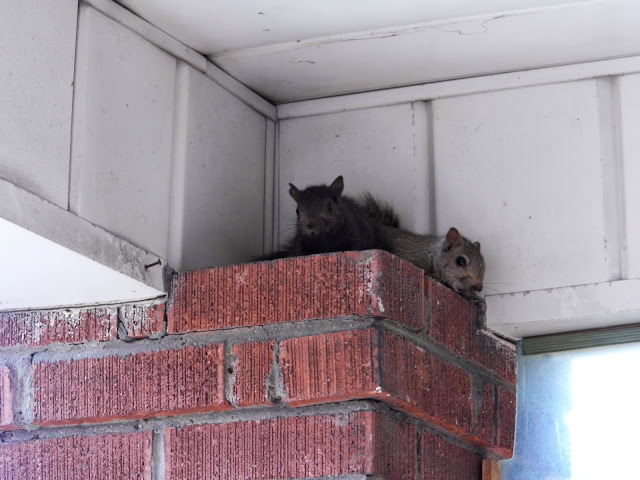 They were all cuddled up there like a cute interracial squirrel couple.  They're actually kind of growing on me...

And then there's our other animal, Barkley.  He hated the fireworks on the weekend and now every time we want him to go outside, he looks at us as if to say, "What kind of sucker do you think I am?  There's NO way I'm going out there with all those fireworks!"

Eventually, we convinced him to come outside and enjoy the weather.  He stood by the door the entire time.  Finally, Corey decided to carry him to the back of the yard to show him everything was okay: 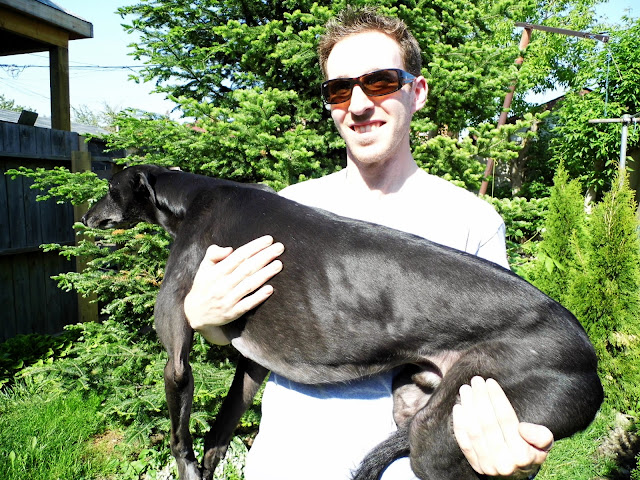 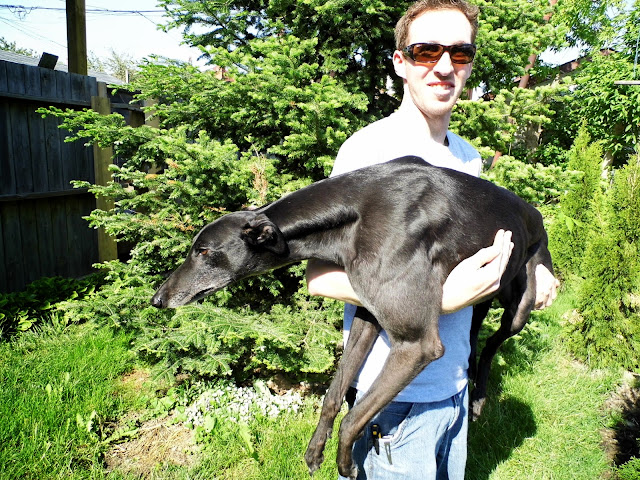 What a baby!  He's tough as nails when he hears a loud noise but he's totally Corey's baby!

So do any of you know of a good way to let neighbourhood squirrels know that your house is NOT the party house?

Update: Our neighbours told Corey that the previous owner of our house fed the squirrels.  Now I'm feeling a little guilty because our house was a known source of food and now it isn't.  Somebody talk me out of feeding them before my neighbours start to hate me!

How about a good way to calm your dog when there are fireworks outside?  We have just over a month until Canada Day...

Another Update:  When I left for work yesterday, there were four, yes FOUR squirrels waiting for me in the morning.  I'm worried about how thin they are because it's nesting season but I don't want to feed them.  They obviously think our house is a food source.  Any ideas of a kind way to get rid of them?