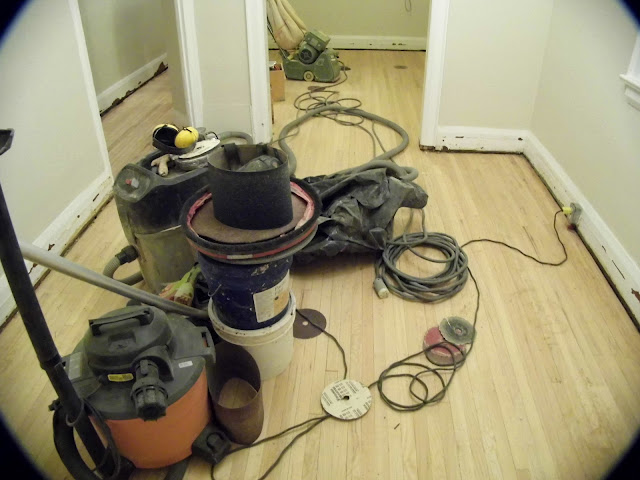 Sorry for the weird title, Mr. Sandless was recommended by a fellow real estate agent to refinish our hardwood floors and their quote was the most reasonable... by far.  I must be giddy from the lack of sleep but I have alternated between pretending that "Sandless" is the owner's surname and playing "Mr. Sandman" on repeat in my head.  I seriously can't get the song out of my head!

Okay, that's enough.  Let's talk about our floors.  It's a little early to relive our little misadventures in ripping up the layers of floor and subfloor to expose the lovely hardwood, but I'll post a few pictures to catch you up.

First, I want to talk about our decision to have the floors done professionally.  Many of you remember that floors were on my original diy list but things change and we are learning to be flexible.  One of my clients (who is very talented and has laid flooring. tiles, built decks... the list goes on) actually convinced me that a novice should never attempt something as unforgiving as sanding and staining their own beautiful hardwood.  After explaining exactly what was involved, I decided to call around for quotes.

Most of my quotes were in the $2.88 - $3.50 per square foot range and ALL made sure to qualify that if there was damage or excessive patching required, their quote would rise.  They also all informed me that it would be about a week until we could walk on the floors.

Now, at the risk of this sounding like a commercial for Mr. Sandless, (which it is not) I must say that their quote was the most affordable BY FAR over the phone so we decided to invite him to the house to take a look.

This was the day after we had moved and we had only exposed a little bit of floor in the living room: 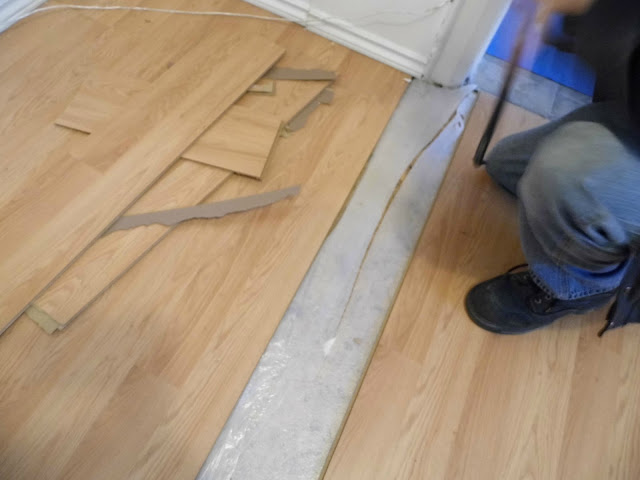 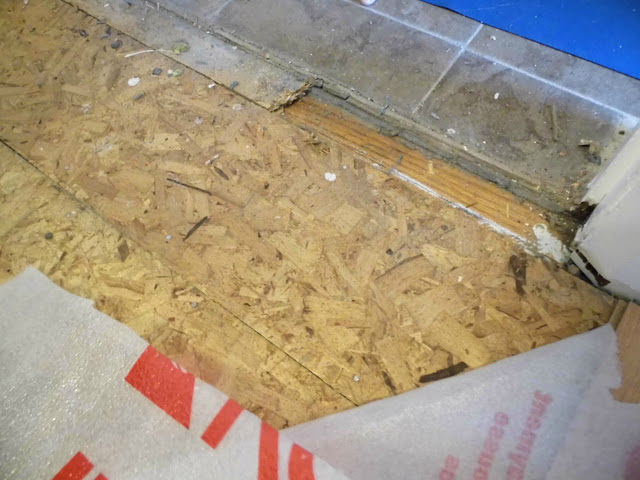 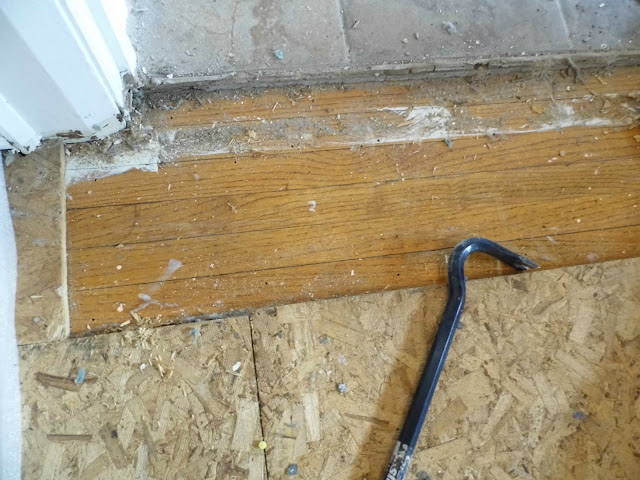 Tom from Mr. Sandless looked at it and it seemed like the sandless technique could work on the downstairs floors.  This technique is faster and cheaper and involves a deep clean and prep for finishing but it will not remove bad paint stains.

For this reason, Tome told us he would bring in sanders for the upstairs.  Just look at all those paint stains in the bedrooms! (below) 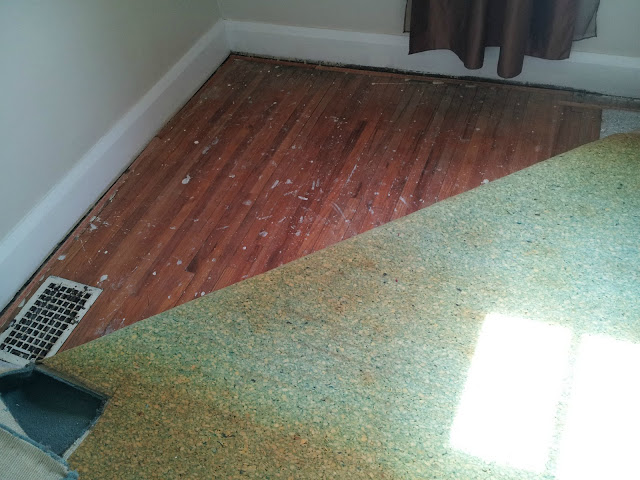 So Tom quoted us for the sandless technique downstairs and sanding and staining upstairs.  He suggested we rip the top layers of floor ourselves to save money.  When he saw our living situation in the basement (below) he agreed to squeeze us in between other clients so we agreed to have the downstairs ready for Monday and the upstairs ready for his sanders on Tuesday. 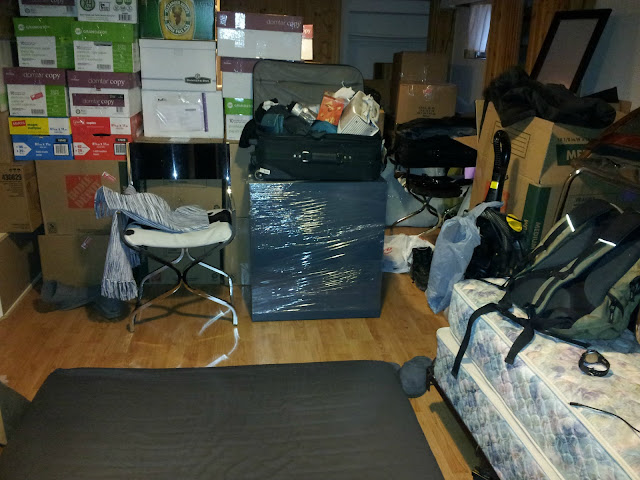 Well, we worked almost all night, but we managed to get the living room and dining room ready for Monday morning.  Unfortunately, they were also badly stained with paint. 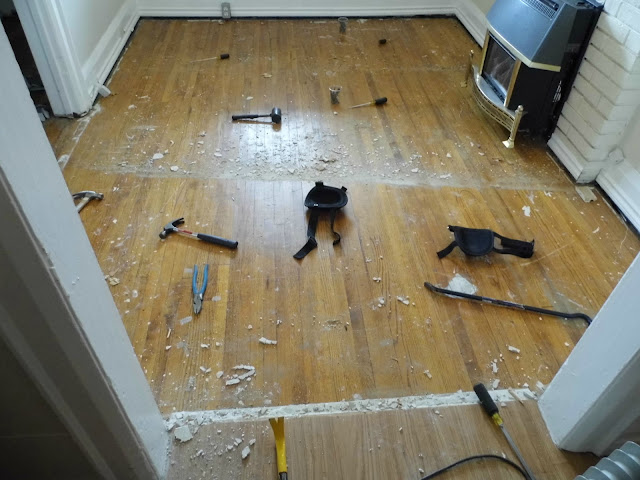 During our enthusiastic demolition, we also found ourselves pulling up two layers of tile from the entrance hall.  This was obviously not part of the initial quote. 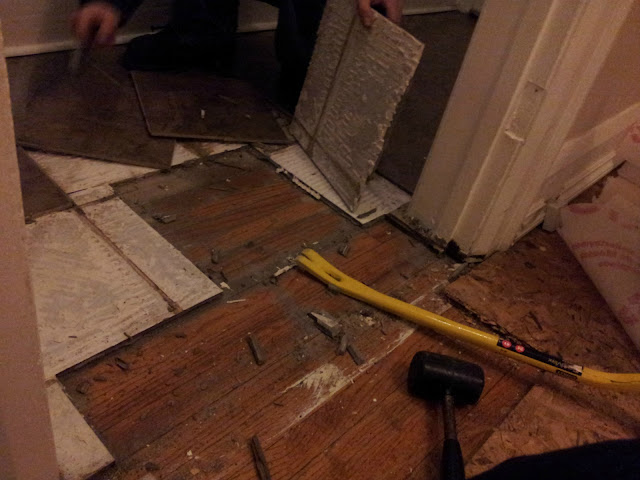 We also uncovered some patch work which was (poorly) done to cover an old return.
﻿ 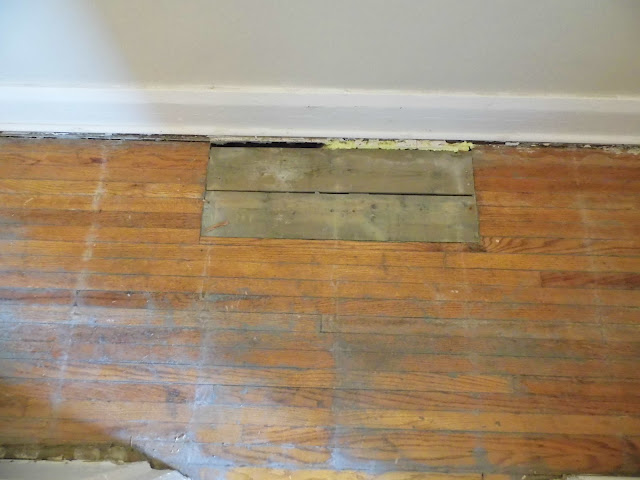 We were nervous to show Tom because we knew we hadn't budgeted for much more than he had initially quoted.  I was thinking of alternatives like just painting the floor in the hallway or embracing the paint stains on the main floor.

Anyway, Tom arrived and confirmed our fears that the main floor was too badly damaged to use the sandless technique and it would need to be sanded as well.  He did say that he had a carpenter who could cut some narrow planks to cover the return and that would be a pretty close match if they were stained the same shade.  We held our breaths and asked for the price...

Maybe it was the fact that we hadn't slept... or that he could see the nails we had removed from the subfloor on the table... 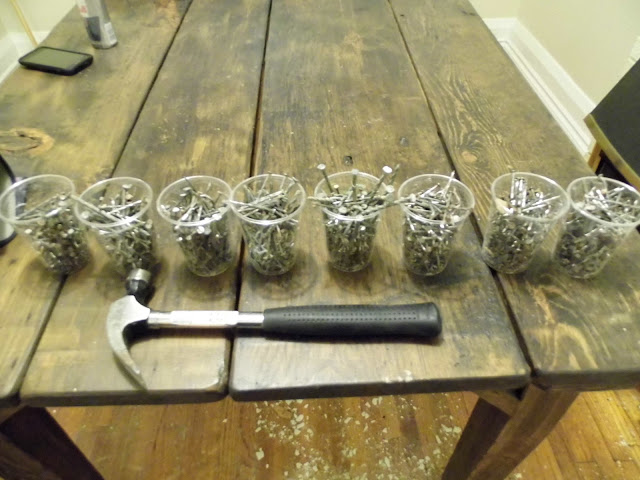 But Tom told us he would HONOUR HIS ORIGINAL QUOTE AND JUST "THROW IN" THE EXTRA SANDING AND HALLWAY.  Whhaaattt?  Does that ever happen?  Wow, those magic words probably made my grinchy heart grow three sizes!  Seriously, we had been so upset upon discovering all the stuff the previous owner had left for us to clean up in the yard but I think Tom's good deed spread and we cleaned the yard without grumbling later that day.
So Tom's sanding guy began working on the upstairs on Tuesday morning.  Here's a photo of what the floors look like sanded.
﻿ 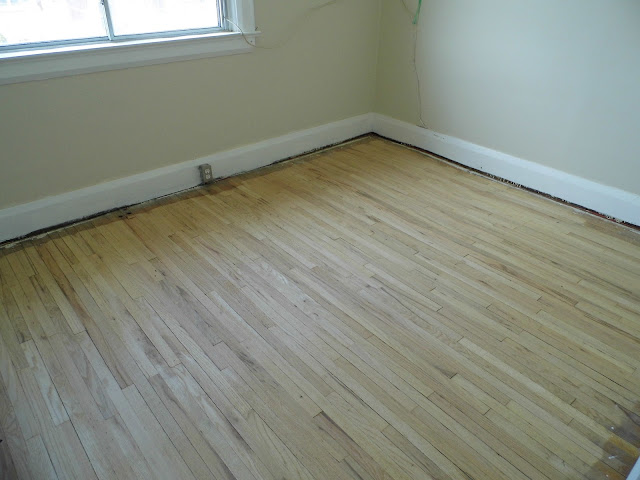 By the end of the day on Tuesday, the house was almost ready to be stained.
﻿

Here's a photo of the closets to show the original wood trim.  We love it but, it's been painted white everywhere else and we don't think the door frames match so I don't think we'll try to restore it.
﻿ 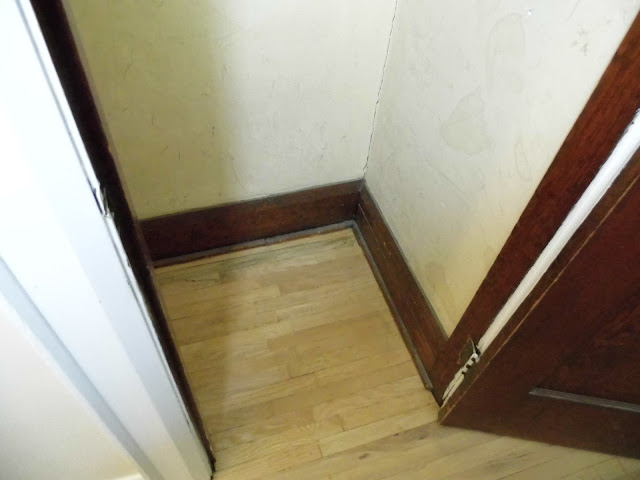 By Wednesday (yesterday) afternoon, the stain had been applied to the entire house.  We had chosen Jacobean by Minwax. 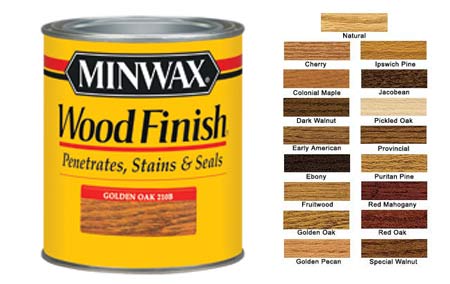 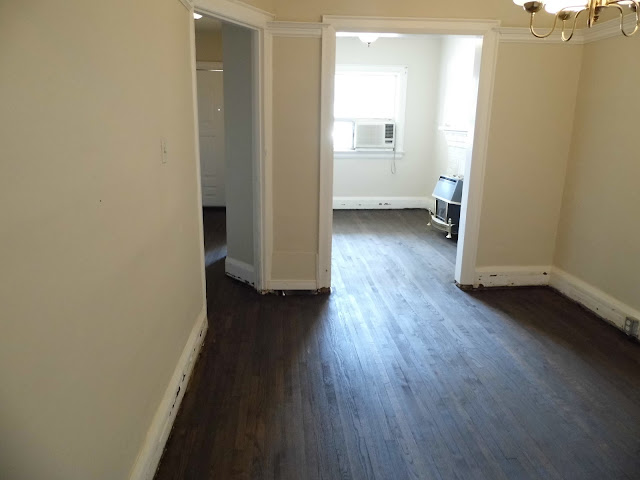 We love the colour but the floor is still dull  in this photo because it's not quite finished.  Tom returned after his worker had sanded and stained so that he could apply the finishing layer.  This is where Tom saves time and could have our floors ready to walk on in two days rather than a week:  Instead of polyurethane or whatever people typically use, their top coat dries quickly.  Tom was at our house until late because he applied several layers and allowed them to dry in between.  Usually it would take a day for each layer to dry.
Anyway, we arrived home from our last run to the dump to find that Tom had finished.  Here's the finished product:
﻿ 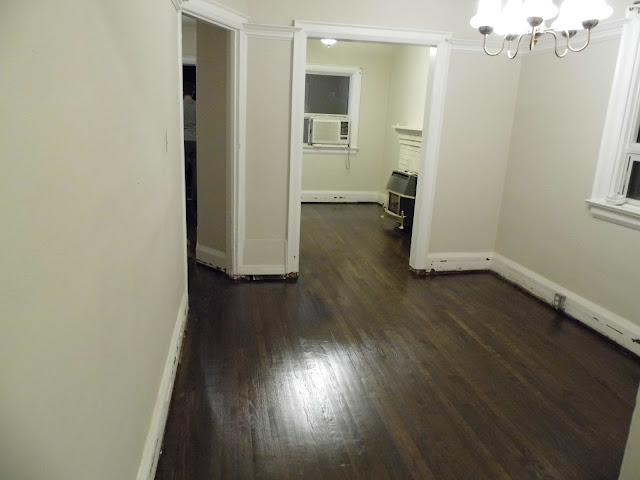 This picture is a little lighter because of the flash but I wanted to show you that the grain in the planks is still visible.  It had been my biggest fear of choosing a darker colour that it would hide the grain and no longer look like wood.  Obviously, I didn't need to worry.
﻿ 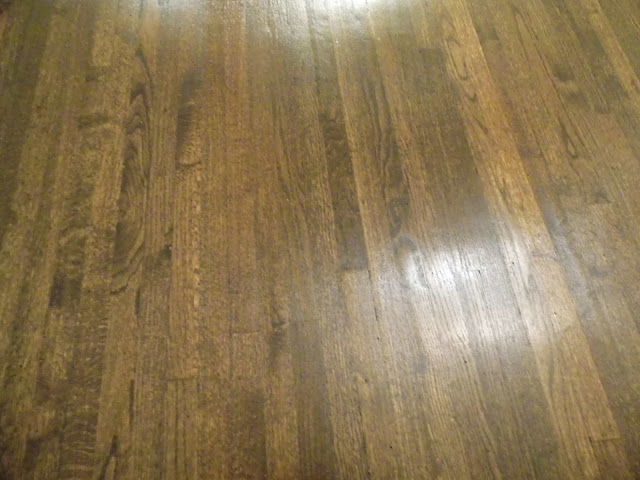 And let's talk about that hole where there had once been an air return.  Tom had promised us a carpenter who would fill the hole with narrow planks.
﻿ He cut the planks on site so they would be a perfect match and could eventually be sanded and stained with our existing planks. 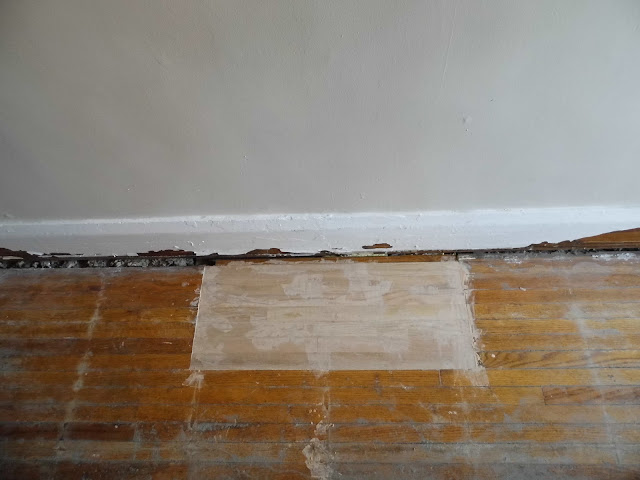 And here's that same spot after being stained! 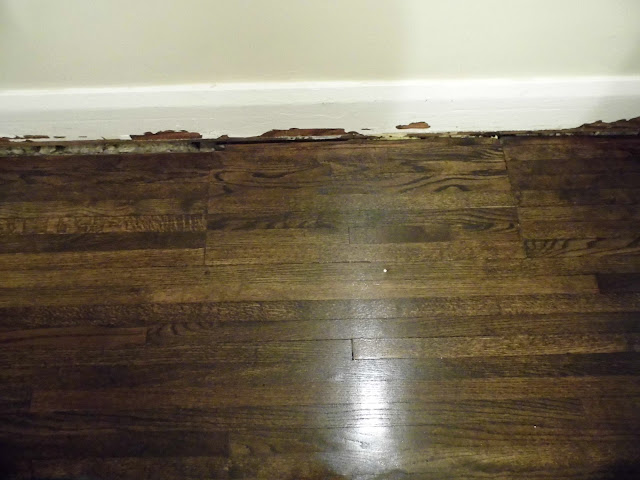 Obviously, we would recommend Tom from Mr. Sandless to anyone who asks about refinishing their floors.  We think he did a great job and we can't wait to show you how great the rest of the house looks with these new floors!