Your Dream Home: How Do You Know When You've Found It? (Part 1) 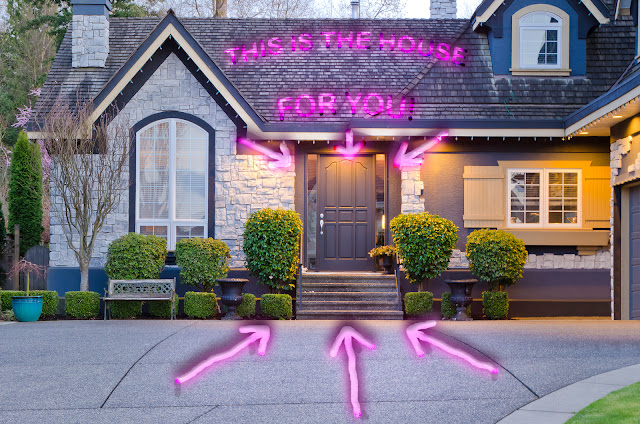 As you know, Corey and I recently purchased a house.  No, it's not the lovely home in the picture, but it's an equally attractive (to us) home with a deep lot for Barkley to run and located in a neighbourhood we like and think will improve in the future.  Friends have been asking us how many houses we looked at and how long it took us to find this house and they're often surprised by our answer.  Today, I'll share our story and some of the criteria we used to decide so quickly.  No, our house didn't have any neon signs telling us that it was the right house... although, as an agent, I think that would be awesome!  Instead we used a combination of gut feeling and logic and we are thrilled with our decision!

First, I'll explain the lack of pictures.  It's a personal decision for me not to post even exterior photos until we actually own the house out of respect for the current owners.  Once we take possession, there will be no shortage of "before and after" photos as we share our renovation diary with all of you!

Back in the fall, I turned 30 and had a bit of a grown-up crisis.  I woke up one morning and suddenly remembered that I had never intended to stay in our condo for so long.  Our condo had always been a short-term living situation in my mind but it's funny how life sometimes speeds up and our temporary condo had somehow become semi-permanent.

We looked at a few houses (perhaps 4 or 5) and spoke with my mortgage specialist at RBC before deciding to hold off for a few months to get our ducks in a row and prepare to sell.  As president of my condo board, I had an AGM coming up and, after a year of many positive changes to our condo, I wanted to see my obligations through before leaving.

I began staging the condo over the winter and put away some of my more unique art and spruced up with some new bedding and throw pillows.  We listed in January, prepared to stay on the market for a little while and, while I sent listings in our price range to Corey, I refused to look at any myself.  I knew how I would feel if I saw a fabulous house before we were ready to buy and I didn't want to tempt myself until we had sold.

Shortly after our sale became firm (conditions were waived by our buyers) we decided to see four houses one evening.  We arrived home late and the next morning, I drafted an offer on our favourite of the four.

This process rarely happens this quickly with buyers and some people assume that it was easier because I am a real estate agent.  This may be true in a sense because I have more awareness of what to expect in our price range and in the current market but I believe it has more to do with the fact that Corey and I both had very clear "needs" and "wants" which helped us to narrow our search rather quickly.

Needs:
Wants:
We realized rather quickly that we had quite a few choices so we began to narrow our search further.  While I didn't mind the idea of permit street parking, Corey really wanted a parking space so we added it to our "need" list.  We also decided that we'd enjoy some quiet after living on a main street in our condo so we decided to only look at houses which were not situated on a main street.

These modifications left us with 4 houses which still matched our criteria so we decided to see them all.  They were almost all priced within about 10K (one was lower than the others) but they were spread over four very different neighbourhoods.  Here's what we found:
We ended up choosing a house, sleeping on it and changing our minds.  Actually, I woke up to discover that Corey was sick and had stayed home from work.  "Great" I replied.  "Now I have time to draft an offer on that other house before I go to work!"  Luckily, Corey indulges me and happily supported me in making an offer on our second choice... which after some sleep, became my first choice.  Once Corey allowed me to show him some information on the neighbourhood, it became his first choice as well. :)    Note: Corey says I actually woke up and said "No, we're not supposed to buy that house.  We're making an offer on _!"

Since we have purchased our house, I have stopped looking at other listings in our price range unless it has been for a client.  I have also told Corey that unless it's for work, I'm not going to search neighbourhood sales for at least a year since it's a good way to drive myself crazy.  Besides, there's no point in worrying about prices next year when we plan to stay in this house for at least a decade.

Of the four houses, can you guess which one we ended up purchasing?  I'll share the answer tomorrow. :)