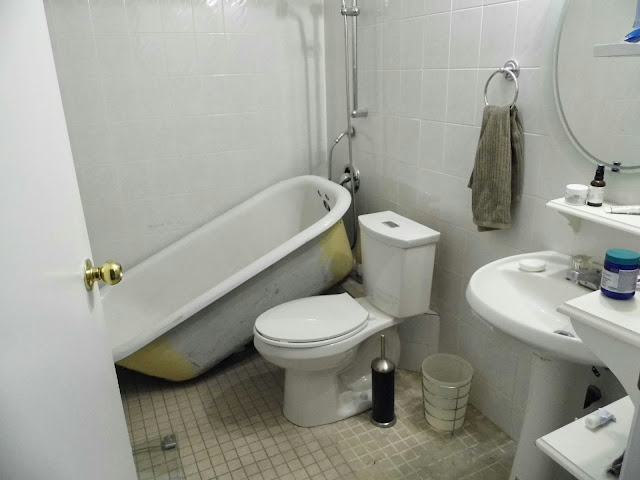 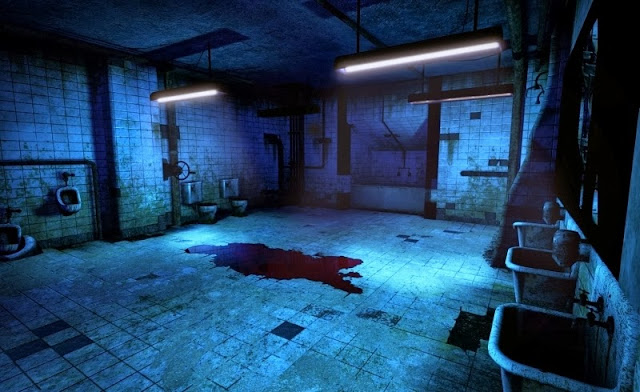 I know it's been no secret that we're not happy with the state of our bathroom.  In fact, we've been planning to embark on a complete renovation this fall.  Unfortunately, we've both been busy with work and we've been procrastinating it a little bit... until fate stepped in.
This time, fate took the form of a plumbing leak.  No damage was done and Corey turned off the water quickly, but we knew we would need to remove the hideous pedestal sink and decided it was time to buckle down and begin our bathroom reno.
Initially, we had planned to prepare properly for our renovation.  We would move all our things to the basement bathroom and completely demolish everything... right down to the studs.  Since we are not quite ready for something so drastic, we have settled for replacing the sink until we can complete some other projects and then remove the new sink and proceed with our reno.
Here's a look at the bathroom right now.  I didn't clean up for you guys because some of you have said that it's important for you to see what it's actually like to live in a house while you renovate. 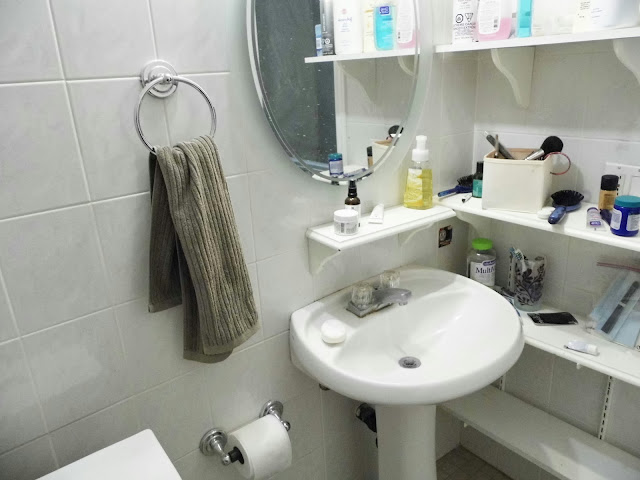 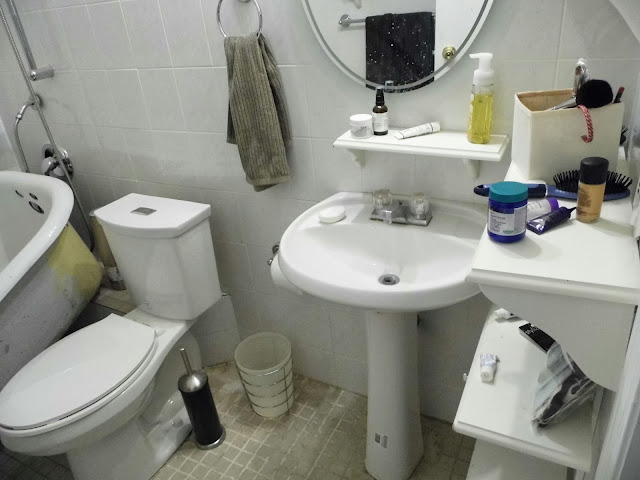 Not pretty, I know.  But that's what happens when you have a bathroom (with no storage) being used by two adult people with faces... and hair... and teeth to clean.  Apparently it takes a lot to make us beautiful.
To make matters worse, those "shelves" are barely secured to the wall at all, and the tops are not secured to the brackets, so they collapse sometimes more frequently than I'd like to admit.  Seriously, the shelves are just resting on the brackets, and if you take them off, the brackets just spin around.  It's a disaster.  It has been annoying... but not worthwhile to repair when we knew this room would be a gut job. 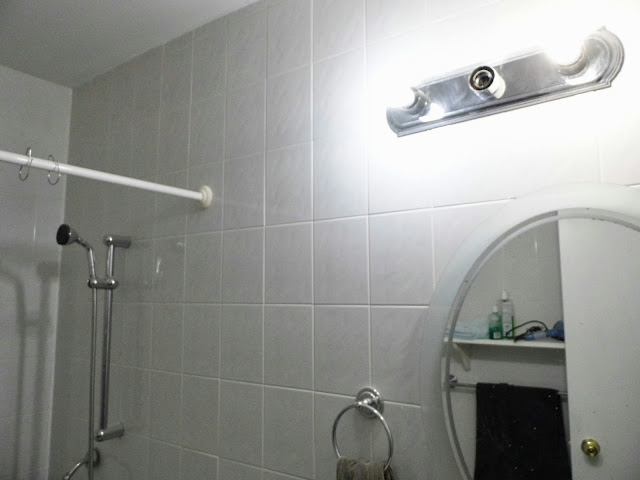 We've known for a while that Ikea would be our "go to" place for many of the things we'll need.  I love the idea of the juxtaposition of their ultra modern high-gloss cabinets with our clawfoot tub.
Unlike the condo, we plan to make this house our home for many years.  This means we need to consider things like kids and storage when choosing things.
We purchased the Godmorgon sink cabinet in white.  We went with the widest version that would fit in our space.  We really like the large drawers (yay for storage) and the fact that the cabinet is wall mounted... so one day we can stash a small stool underneath!
It was more difficult to choose a sink.  With almost 40 inches of available space, we could have installed double sinks.  From a real estate perspective, (Another great feature for our future listing!) my mouth watered.  But from a practical standpoint, we passed and chose a counter with a single sink.  The Rattviken sink  is wide enough for two people to stand side by side and brush their teeth at the same time, but it also offers more counter space than a double sink would have given us.  I also like the raised backsplash and ridge around the perimeter, which will make it more difficult to knock things onto the floor.
Then we chose the Lundskar faucet.  With a few different options (and me debating whether we should look elsewhere) Corey pointed out that I would like a tall faucet to fill my watering cans and water bottles.  I was so touched that he thought of such an important detail for me, which will make life a little easier.  So we bought the coolest looking faucet (I love the interesting lines) we could find and headed for the checkout.
Note- we did buy a couple of other items for our bathroom remodel, and you'll see them in another post... promise!
When we arrived home, Corey went to work.  He began by removing those awful shelves.  Let the demo begin! ... FYI, the Thomas the Tank Engine sticker is not ours... Although I do appreciate it as it has been the only "décor" in our washroom for months. 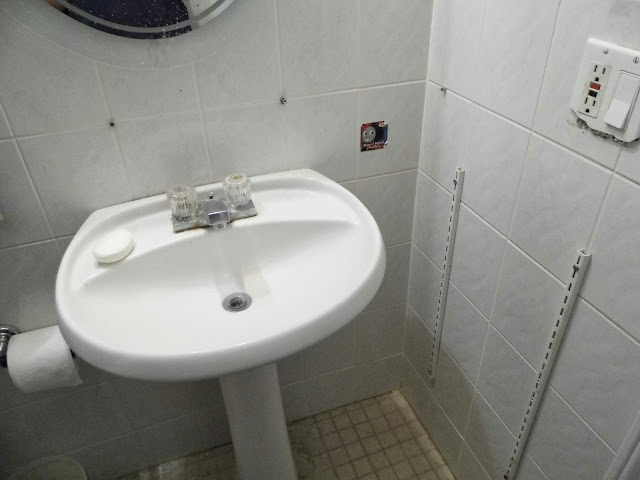 While we're leaving most of the demo for later, Corey did need to expose the studs in the wall so that he could mount the cabinet securely. 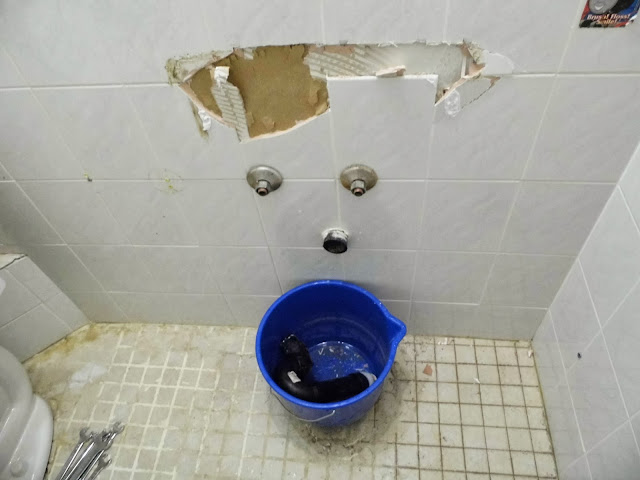 After discovering that the dimensions of the cabinet did not match up with the distance between our studs, Corey decided to build a frame to bridge the gaps.  I was working and didn't manage to get a good picture of this step, but I'll try to catch it when we remove the sink to finish removing all the tiles on the walls and floor. 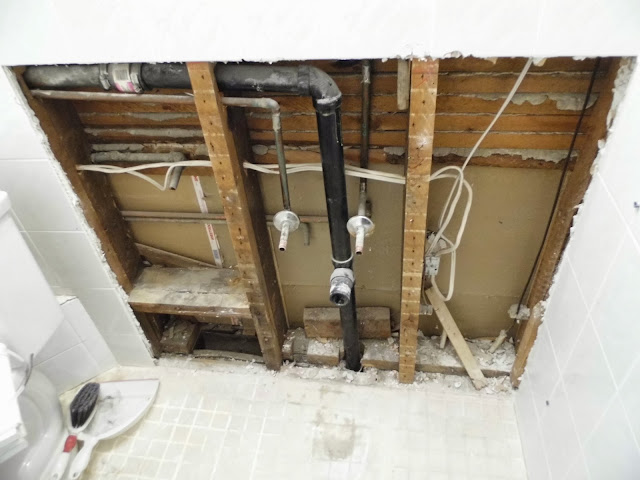 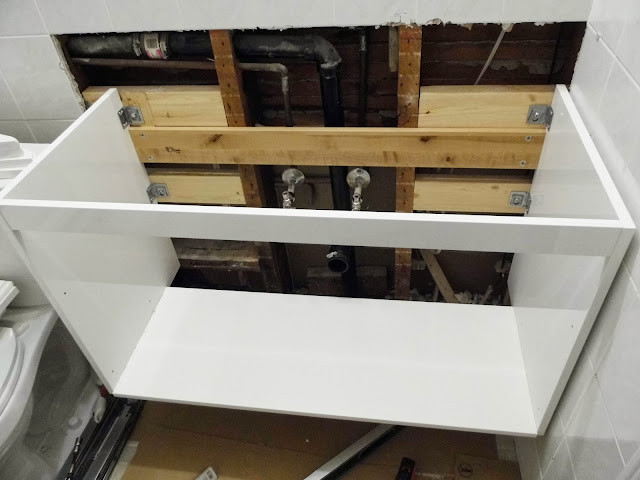 During the process, Corey also decided to upgrade the plumbing that came with the Ikea sink and faucet to something more durable.  To accommodate drawers (as opposed to the typical cabinet doors) he also needed to relocate some of the plumbing so that it was inside the wall.  While this required some extra work, we think it is worthwhile to have so much extra storage space in our small bathroom.
Here's the finished temporary sink.  All the wall tiles will be gone in a few weeks when we continue our work on the washroom, but we are already thrilled with the extra storage and counter space!  It's not much, but it's a start. 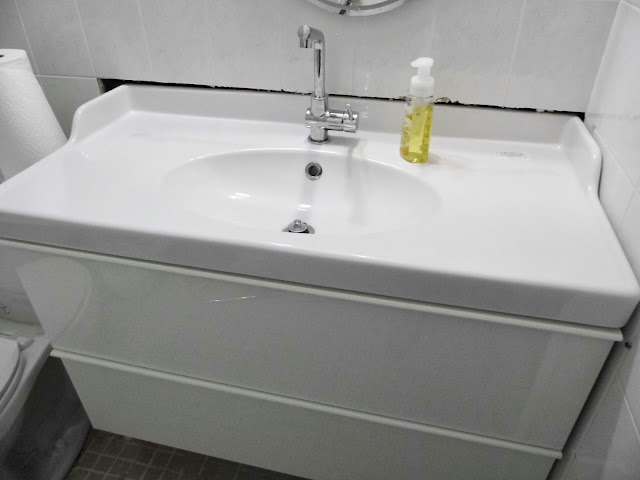 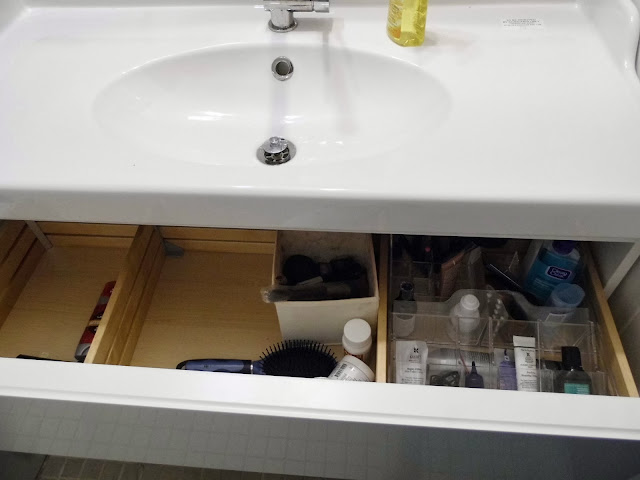 ﻿
Just look at all that storage.  LOOK AT IT!!!  Our bathroom reno is officially underway.  Let the games begin.
﻿