Why We Should Support Our "Crazy" Sisters on Reality TV... 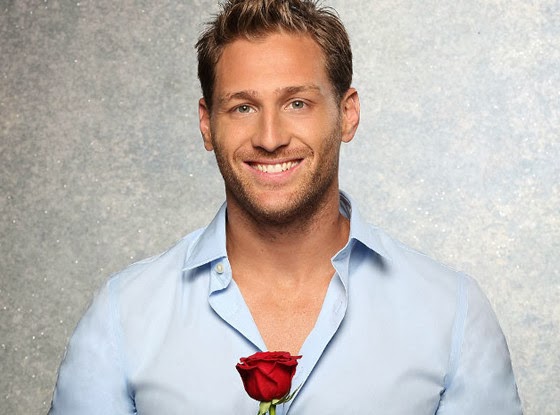 Attention!  Crazy rant alert!  Okay, I think this post should really be called "Why I would be the craziest crazy of all, if I were a contestant on The Bachelor" but it sounded a little long... and, quite frankly, a little unflattering.  Still, after reading a great blog post musing about the psychology behind the popular show, I started to examine my own viewing habits.

You see, The Bachelor has been a favourite guilty pleasure of mine since the very first season!  It has everything: romance, hunky guys, drama, crazy girls, insane families and it allows me to dissect and analyze their outfits and actions (and outfits choices) in the cattiest way imaginable... all along rooting for my top picks for the finals.  As someone who doesn't watch sports, this is like my playoff season.  In fact, if there were a fantasy pool with all my favourite gals of seasons past, (Tina Fabulous, anyone?) I would be all over it!  I'm a little ashamed to admit it to you, but I don't think I'm alone in loving this addictive trashy hour of "reality" tv and gabbing with my mom later about the meltdowns and drama while applauding the occasional graceful exit.

It was not until today that I actually thought about what the show really is and how damaging it is to many of the participants.  I have always thought of myself as feminist and an overall advocate for equality and human rights.  I also love and try to support other women in my everyday life.  What makes it okay for me to love a television show which not only demonstrates a clear racial and sexual orientation bias, but also takes regular women, places them in an usual bubble and encourages them to act out their worst gender stereotypes?  Sure, it's hilarious, but I'm not a mean person in my normal life and yet I am completely guilty of objectifying these women and laughing at their misfortune!  It's true- I even call one of the women this season "Flower" because I can't bother remembering her name.

Sure, it's not exactly a behaviour to be proud of, you think... But it's not actually hurting anyone, right?  I suppose this has been my thought all along, and I'm not trying to make anyone feel guilty for enjoying what is an undeniably entertaining show.  I do, however, feel that I'd be happier and more sympathetic towards these women, if I gave the show a little more thought.  I should note that I'm not qualified to actually diagnose some of mental illness bred by this crazy environment... but that won't stop me from trying!

First of all, let's look at the dynamic of the show itself.  One guy, twenty-five women who have already completed and "passed" some sort of selection process, quit (I assume) their jobs and committed themselves to "finding love"... Considering the sacrifice and the feeling of "being so close" once they are selected, there is an automatic human drive to want to get to the end.

And what makes these women (many of whom are witty, accomplished, beautiful and seem genuinely kind) think they have a real shot at love?  I assume it's not the statistics, since only 1 in 25 gets that coveted final rose and only 5 couples from 24 seasons (combining Bachelor and Bachelorette) are still together (far worse than the national divorce rate), the odds of finding a lasting relationship are only about 1 in 120, or 0.83%.

Wouldn't they all be better off quitting their jobs to spend a couple of months on Tinder full-time?  Or perhaps even... considering a date with someone outside their comfort zone who doesn't necessarily have to look like a model?  Probably, but that's not the point.  They all make comments about the amazing love stories that have begun in the house, and I believe this is an excellent case of marketing and selective memory and the show makes sure to follow all the "successful" couples throughout all their milestones... whether or not the viewers care to see them!

So anyway, the women have already given up a lot to be there (gambler's fallacy suggests they may feel due for a win) and they are cut off from everything!  That's right- no books, tv, relationships, or anything that may help to put their situation into perspective or remind them of who they are on the outside.  Then they're plied with alcohol and forced to stay up late and the only people they socialize with are their competitors for the love of one dude! ONE DUDE!!!?  Add to that the fact that reality contestants always mention how quickly they forget about the cameras and we have a recipe for major dramatic outbursts.  It's really a perfect storm, and while I used to think my hot 24 year old self could potentially strategize and "win", now I'm a little dubious and I think I could just as easily have been this girl.

Admit it, if Jennifer Lawrence had said that, it would have been charmingly quirky, but we're not supposed to love most of these girls.  I think it's clear that the producers want us to judge them and (worse) pity them.

Seriously, of course the guy doesn't like you as much as you like him.  You wouldn't be as tied to him either if there were 24 other dudes knocking eachother over to get a couple of minutes alone with you in hopes that you'll keep them around for another week.  I can't believe I'm the only person who thinks this creates a terribly unhealthy power dynamic, which essentially needs to be undone and rebuilt into something more normal once the cameras stop rolling.

And then there are the villains!  You know... the girls we're actually supposed to hate!  Yes, this one was aggressive and perhaps a little mean, but we've already established that in the mansion, your world becomes very small.  I really can't imagine most of these women not being more moderate in the outside world... but reality tv nurtures maximum drama by holding a microscope up to your comments for the whole world to see. 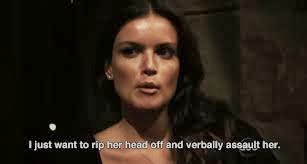 It's no wonder, the dynamic of the show has been (somewhat jokingly) compared to the Stanford Prison Experiments!  The women are essentially (albeit willingly) imprisoned and their only ticket out of the house is a rose!  If you added an evil step-mother, you'd have the sad beginning of a Disney movie!

And when they DO get to unwind or leave the house, is it any wonder (especially with the alcohol and lack of sleep and camera awareness) that they cut loose a little?

Seriously, I don't know how any of them manage to play it cool on a date!  I'd just be so happy for a new person to speak to, I'd probably be all " LOOK WHAT I CAN DO!!"

Am I right, ladies?  And let's not even get into the fact that these girls are shamed mercilessly should they find themselves attracted to a cameraman or (gasp) a man back home!  Let's not even discuss the hypocrisy of that!  Or what about those overnight dates once it's down to three, where he sleeps with all of them and it always kind of makes me cringe because the women always express that they wish it were just them and I imagine them justifying it to themselves by thinking of how close they are to getting that final rose.  The woman sent home that week always has my sympathy and I imagine her having to relive the date months later with her friends and family when it airs on tv.... Double cringe!

Anyway, I'll probably keep watching the show... as I mentioned, it's deliciously entertaining and it's so trashy that I almost feel naughty for watching it.  One thing I will do in the future, is try to be more mindful of what's really happening behind the scenes.  There's probably really nothing wrong with most of these women and many who have been edited poorly, are likely totally fine... maybe even amazing women!  Perhaps they're even a lot like me and my friends.

So as I watch, I'm going to try to internalize less of this:

And more of this:

It may be a tv show, but these women are real people.  I often forget that they're not just here for my entertainment.  But it helps to remember that they'll have to go back to their lives after the show and they don't need people like me judging their choices or snickering about something embarrassing that they did.  Isn't that just bullying, anyway?

Finally, I'm going to try to start calling Flower by her real name... I think it's Lucy.  Who's with me?