Life Goals: Find the most amazing man in the world and make him want to marry me... Check and CHECK! 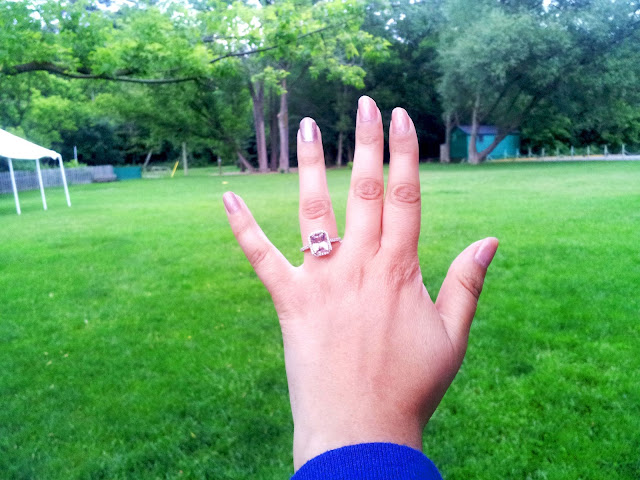 That's right, folks.  This engagement is seven years in the making but Corey followed our timeline and popped the question just two months after we bought a house.  The proposal itself wasn't a surprise since Corey and I plan major decisions together but the timing certainly was!  I had really thought that Corey would make me wait a little longer but he's never been one to keep a secret from me for long. ;-)

Since this blog is kind of a public diary of our lives and our home, I want to share this news with you.  We've waited a few days to give us time to enjoy the news on our own and let our families and close friends know but it's now time to share the details.

Corey and I met while working at our favourite Toronto day camp.  We were much younger back then, and I think we both assumed it would be a summer fling... but it obviously turned out to be much more special.

I made Corey promise a long time ago not to propose with people around since I hate a spectacle.  Okay, you're right, I love a spectacle but only when I'm prepared for it!  Anyway, he had to do some work at the camp on the weekend and I told him I would drive him in in case his allergies started bothering him.  I brought a book and we hopped in the car and drove to the beautiful tree-filled valley where we first met...

It has been years since I visited the camp and we wandered out into the field so that he could point out some of the updates I'd missed.  I'm going to keep the details of Corey's speech private between the two of us (it's nice to have one thing that is just ours!) but he essentially recalled our past and told me he was thrilled that such a special, strong relationship grew out of the place we were standing and what better place to begin our next chapter than where it all began.

For once, I was at a loss for words and all I could do was hug him because my eyes had welled up with tears.  It was low-key and very personal.  Perfect.

It is impossible to be grateful for the milestones in life, without thinking of the people who gently nudged you toward your path over the years.  There was one person in particular who I thought of when we were down in the valley... and I think, if she could have seen us, she would have been pleased for our happiness.

We stopped at the LCBO on the way home to buy some champagne... but decided that toasting with scotch was more our style.  We told a few family members and close friends right away and shared the news with Barkley... who promptly sniffed my ring to see if it was meat.

Then we took a long walk with Barkley and we talked for hours while I admired my ring from every angle in the moonlight and made several Lord of the Rings jokes, as one does!

The first question many girls ask is about my ring and I can never remember how many carats it is or how to describe the clarity (VVS whaaaat????) so I'm writing it down here.

Most women have some idea of what their engagement ring will look like.  My thoughts on the matter have changed significantly over the years.  When I was younger, I drooled over an emerald cut diamond with tapered baguettes on the Tiffany website: 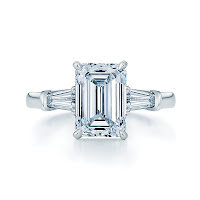 ... but then I found out it was actually pretty popular and, in all honesty, since we're shopping for the ring after the house, I have so many other things that I'm more excited to spend money on... like a bathroom reno!  After all, a beautiful old clawfoot tub on a heated floor is just as sexy as a big rock!  Am I right, ladies?

Then I became a little obsessed with the idea of something hip, asymmetrical and very different like the rings on the Mociun website. 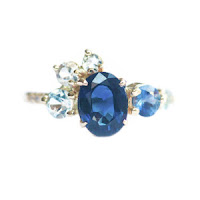 Let's just say that my bffs breathed a sigh of relief when they learned that Corey convinced me that I will not be cool enough to pull this one off when I'm 60!

Still, I was kind of hooked on the idea of a non-traditional stone.  After all, my mom never cared for diamonds much so I grew up admiring her ruby ring.  Like many practical modern couples, Corey and I looked at rings together and collaborated on the finished product with the artist.

It really felt like "us" to be buying a hand-crafted, artisan ring with a Morganite (a member of the Beryl family, like Emerald and Aquamarine) centre stone.  We know that every aspect of the ring is fair trade, conflict free, ethically sourced and with a low environmental impact when compared with a large commercial jeweller.  I think even the gold band is 90% recycled metal which was then refined for purity. 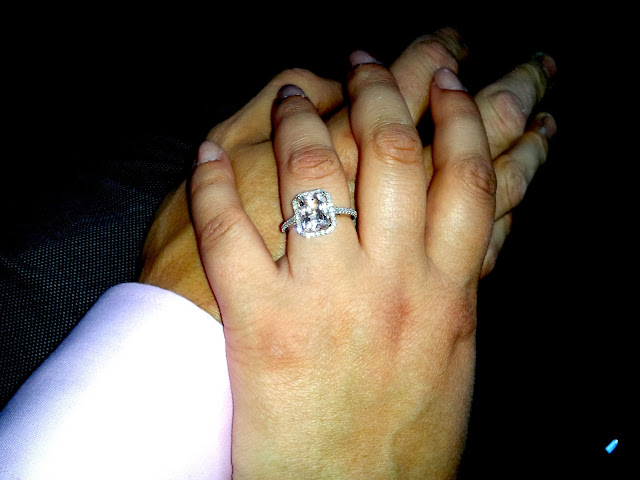 I told Corey that if I wasn't getting a diamond, I wanted a large ring!  It's a cushion cut Morganite (similar in shape to my emerald cut but with more facets to sparkle) with 48 round cut diamonds surrounding it and along the band.  It's definitely not for everyone, but it suits my personality very well.

In order to measure my finger, Corey used my grandmother's wedding ring, which is a symbol of one of the happiest marriages I've ever seen.  What better template for our own symbol of commitment than a ring with so much history?


To Answer Your Questions:

No, there are no wedding details yet.  I'm kind of expecting a long engagement since so much of our money is filtering right into the house at the moment.

No, I will not call Corey my fiancé.  We disagree on this point, but after years of thinking of creative alternatives to "boyfriend" (like partner, or significant other) I think I'm actually going to miss the term.  I keep telling Corey that he will be my boyfriend even when we're old and married.  The day he stops being my boyfriend is the day we've grown up... and who wants to do that?

No, this blog will not morph into a wedding diy blog.  I am making that promise now!  I haven't "pinned" any wedding ideas and do not have a dream dress or dream cake.  That being said, when we DO decide to get married, I will indulge in the odd wedding post.

Funny Story: I wanted to announce our engagement with a funny graphic and I found this hilarious "Got One!" cartoon on google image search.  The website wasn't working and I was trying to trace the source of the original image so I googled "man in suit hogtied" and selected images.

Well, I must be the most naive person on earth but I got some unexpected results and I do NOT recommend this search... unless that's actually your thing.

A word to the wise: think about other interpretations of your search words before making a google image query... Some things cannot be unseen.