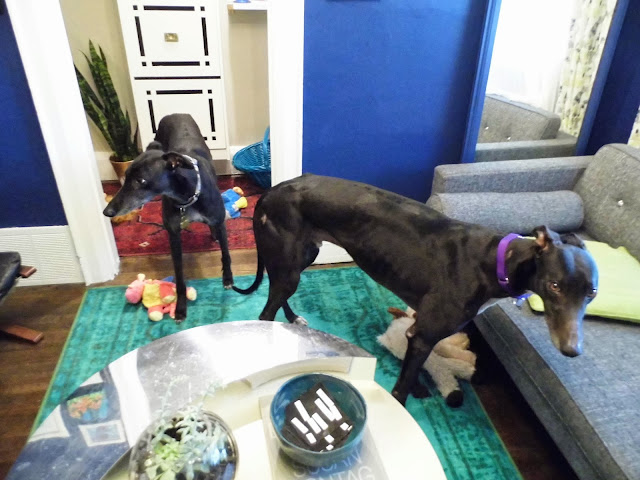 I think the title of this post should actually be "Double Trouble" because a second greyhound certainly means twice the mischief.  You know when you visit your friends who have children and they're totally apologetic about the toys littered around the place but you automatically overlook it because... THEY HAVE KIDS and kids turn your world upside down and you're really just impressed that they remember to wear pants?  Well, I'm kind of hoping that's how you'll feel when you look at the top picture with all the dog toys scattered about....
The caption for the top photo should be: "Oh... Hey Mom... We didn't mess up your living room and eat your plant.  Promise!  Can we have some treats now?"
As you may have guessed, we are fostering another ex-racing greyhound!  This time, his name is Friendly and he actually looks quite a bit like Barkley.  Unlike our last foster Louciano, Friendly's temperament is more similar to Barkley's, in that he's content to sleep and cuddle most of the time.
We only have friendly for another week, so I wanted to share some cute pictures of him before he goes to his "forever home".  Here's a picture of him taking a nap with me.
Note- We're not supposed to let the foster dogs on our furniture.  But, the living room couch is irresistible, since it overlooks the front window so instead of telling them "No" constantly, we allow them on that couch only.﻿ 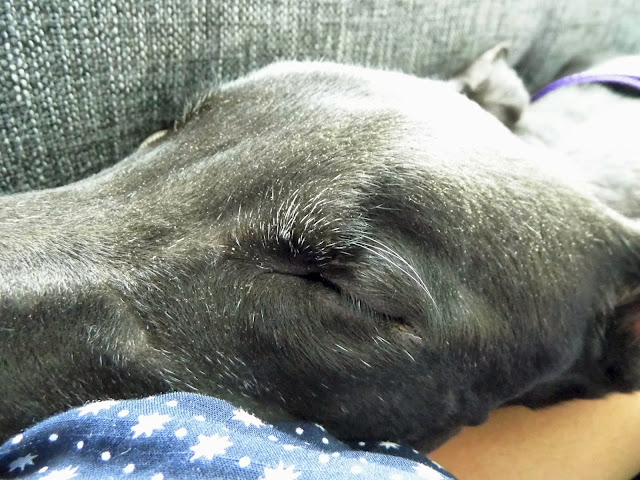 Look at those crazy big ears!  Friendly kind of reminds me of a cartoon wolf! 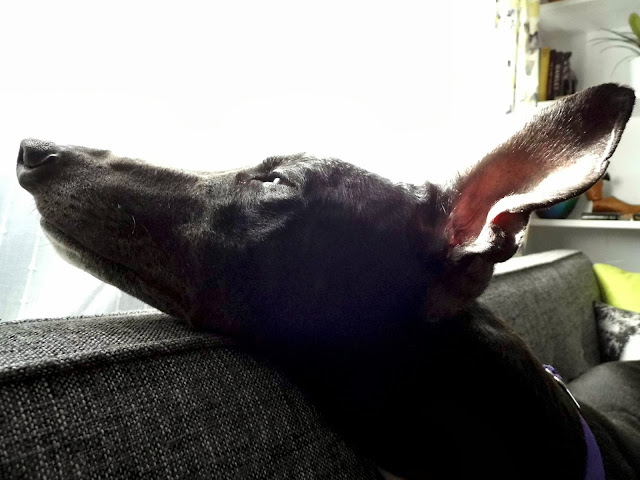 He often sleeps like this and then falls off bum first when he is disturbed. 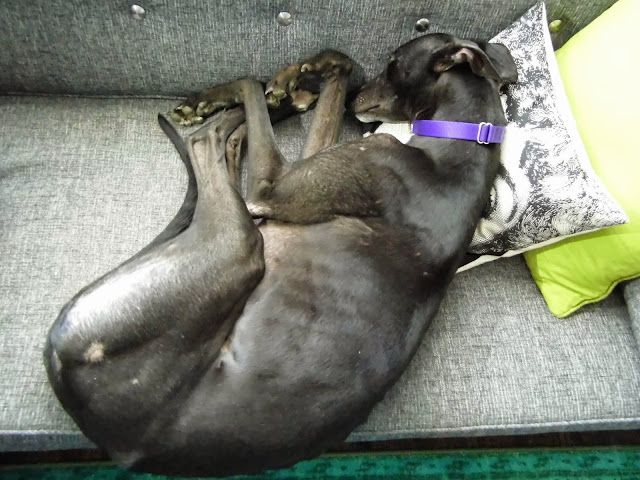 The boys get along surprisingly well! 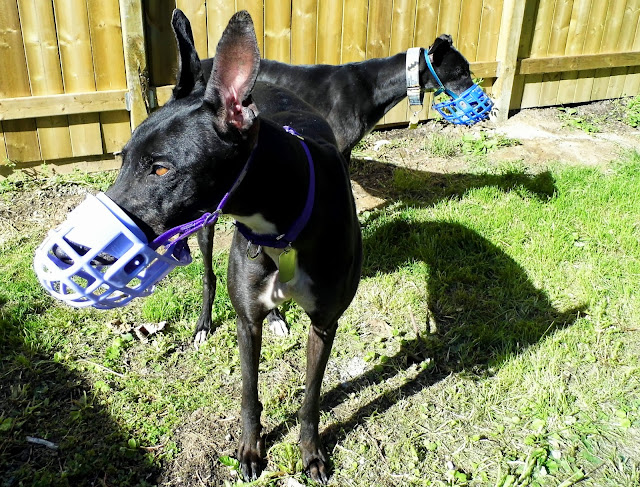 In this picture, Friendly actually has his paws wrapped around Barkley's foot!
﻿ 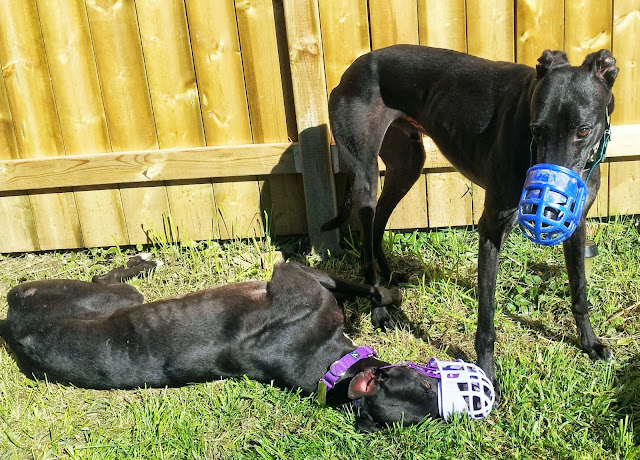 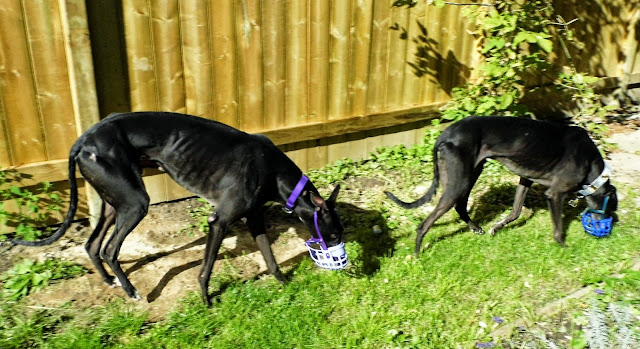 I know you're wondering whether we get these two mixed up.  The short answer is no... They look quite different to us.  However, I double check which dog I have before giving meds or anything like that.

Imagine these two greeting you with kisses every morning! 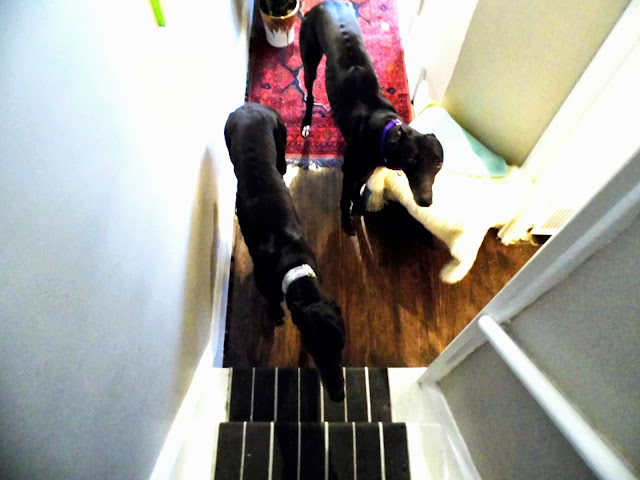 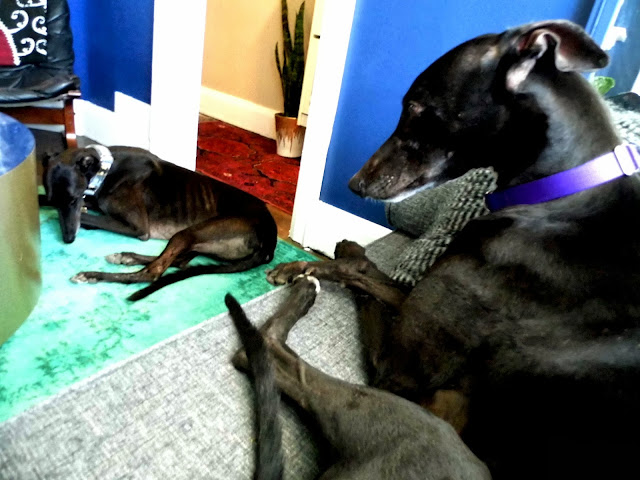 And we're pretty sure Friendly is part cat, since he likes to curl up and try to sleep on top of one of my throw cushions...﻿ 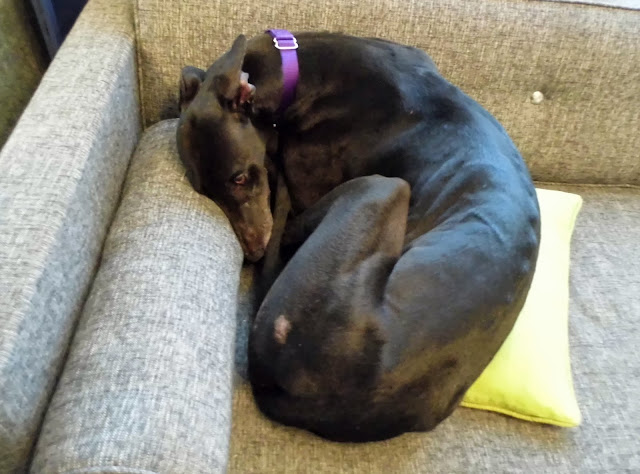 ... We're thrilled to see these two sharing the couch.  I sent this picture to Corey one day with the subject: "It looks like we've officially lost our couch." 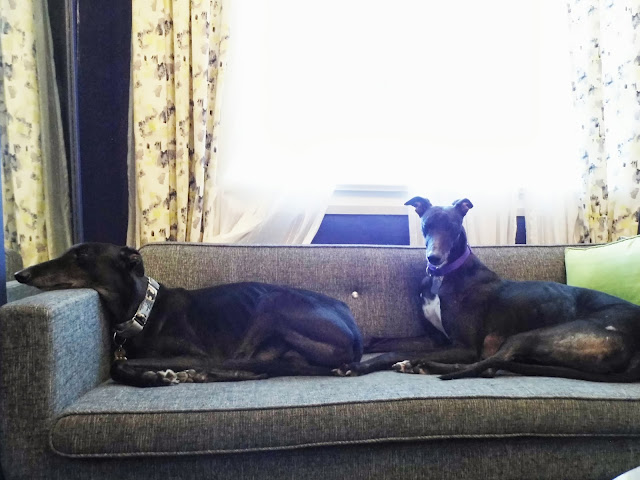 And finally, this is the greyhound equivalent of a bro-hug!  Imagine Barkley saying this in the "Most Interesting Man in the World" voice: I don't always hug other dogs... But when I do, I rest my chin gently on their back. 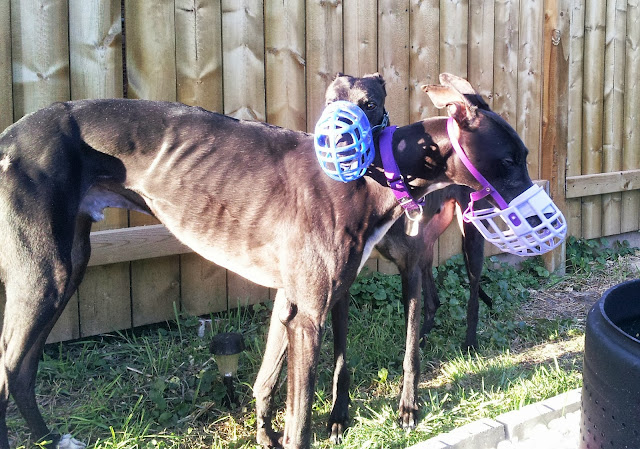 The only drawback to having an extra dog around is that they really are tricky and can get into mischief together.  For instance, Friendly likes to build a "nest" by removing all the cardboard from the recycling and lining his bed with it.

They are also twice as persistent in begging for food.  Corey left for work early today and sent me the following text:

"The boys HAVE been fed.  Don't believe them.  They are trying to trick you."

We hope you enjoyed the pictures!