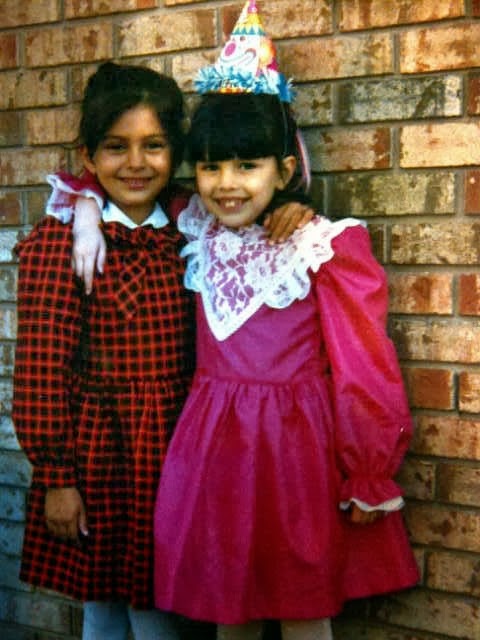 How cute is this old picture?  My cousin and I (I'm the dork in the hat.) are 2 days apart in age, so this is a special week for both of us.  As fate would have it, we're also both going to be married next summer.  I thought this would be an appropriate photo for this post. :)

Today is my birthday and all I can think of is how much has happened in the past year.  Last year, for my 30th, Corey took me horseback riding and also planned a surprise party with my mom and brother.  While I'm not usually one for big spectacles, their surprise party was perfect and intimate and I was touched by the effort from all of them not only to execute it, but to surprise me!

After the post party clean-up, I was left with an uncharacteristically clean condo and a feeling of ... not emptiness, but perhaps dissatisfaction.  I was no longer a 20-Something and, while I had an amazing boyfriend, a fulfilling career, and the love and support of my wonderful family and friends, I still had this nagging feeling that I wasn't even close to being where I was supposed to be in life.  Are we supposed to be grown-up at 30?  I certainly didn't feel totally together.

My mom was married at 28 and I had always thought that was terribly old.  When I was born, she was 32... ancient, right?  That's what I thought, but it's funny how time has a way of creeping up on you.  And the years sped by until I woke up one day and realized that there was no mistaking the fact that I had become an adult.  Yikes!  It's not like I can't see how it happened either... I just hadn't considered it at the time.

You see, when Corey and I met, I was not yet 24 and he was still 18.  As we started to fall in love, I knew I hadn't yet found my calling in life and I found reassurance in the fact that my younger man would not feel the need to settle down for ages.  I had bought myself an extra five years of young adulthood!  Little did I know that Corey was wise beyond his years and was preparing for the fact that I would probably want to settle down while he was still in his 20's.  So smart, my Corey.  So by the time I began to approach the big 3-0, he was already thinking about our timeline for marriage and starting a family and I was like, "What are you talking about?  We're too young for that!"

Anyway, I woke up one morning after my surprise party and I looked around at our nice-but-not-ideal condo, and I decided it was time to move.  I knew we would want a family eventually and before that, Corey wanted to get married and before that, we should get engaged and before that, I wanted to buy a house.  I counted backwards and my head spun.  It was time to move!  Those who know me know that once I decide to do something, I need to do it IMMEDIATELY, so it won't surprise you to know that Corey and I were viewing houses later that day.

I landed back on earth with a thud, when I realized we would need to sell the condo before we moved, and my fellow board members and I had already set in motion some improvements that would make our building more attractive to buyers... So, with difficulty, we decided to hold of on our dreams of moving until the new year.

So we rallied.  I worked myself weary on the board of directors to try to fulfill my goals for our condo before I had to leave.  Meanwhile, Corey worked to put all the finishing touches on the condo before we listed.

At the time, it was so difficult to imagine all the work ahead of us, but here we are, one year later with a totally different outlook.  Not only have we sold the condo and purchased our beloved new/old house, but we are also now engaged and have made great strides with our renovations.  We are very happy now.

You hear so much about the "Quarter-Life Crisis" but nobody talks about the one you have when you turn 30 and still don't feel like an adult.  What's that called?  Can we just call 30 the new 25, since so many people are still in transition careers, housing situations and relationships at that point?

Luckily, with lots of support, luck and hard work, I managed to turn things around this year.  I'm not saying that selling the condo and buying the house made me feel totally grown up... But it was a start.  A good start.

Are you ever shocked by what a difference a year can make?  This has certainly been an eventful one for us!  It makes me wonder what my 32nd birthday will look like...