Business in the Front... Party in the Back! 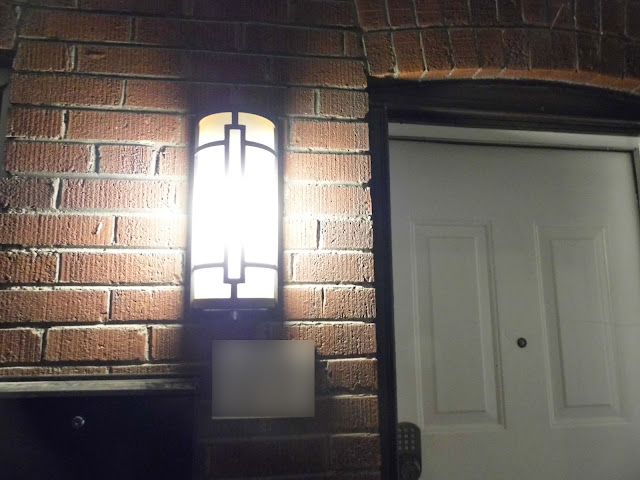 The title of this post actually has very little nothing to do with mullets.  Are you disappointed?  I thought so!  No, the title actually refers to the fact that Corey has been working tirelessly to update the electrical at the front of the house, so it has sort of become "all business", while breaks from our work are spent in the backyard to enjoy our new patio set and fire pit... hence the "party".

We've also been working hard to spruce up our entrance hall, while the family room remains a disaster.  We never actually made a conscious decision to reno the house from front to back, but that's what seems to be happening.  Of course, when we begin our bathroom reno this fall, everything else will be put on hold.

Many of you have been asking what will come after the hallway is finished this week.  I actually have a plan to paint another room (also in Farrow and Ball paint) ... Can you guess which one???  My hope is to have two rooms semi-finished (We still need quarter round around all the baseboards, but that will come later.) before the end of the weekend.

Now, back to the point of this post... I wanted to show you our new outdoor light, (above) which Corey installed after updating the electrical circuit.  What do you think?  We wanted something a touch more contemporary than our old fixture, (below) which would have still looked bad with a proper light bulb, but was demoted to U-G-L-Y (It aint got no alibi!) when paired with an compact fluorescent bulb.  It's a small thing, but it does make our house seem more like OUR house. 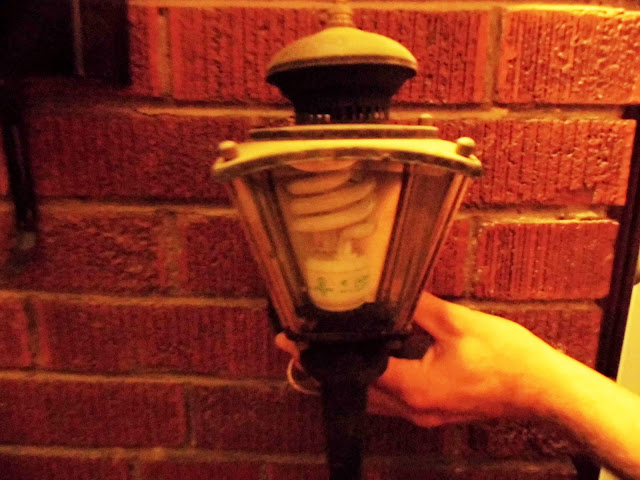 On a related note, now that I feel more comfortable with the electrical work leading to the porch light, I have been making a habit of leaving our porch light on until we go to bed.  My neighbours have already commented that it makes the street feel safer and have told us they'll follow suit.  I love my street, but I was surprised that such a friendly street always appeared so dark at night, so I can only hope that this inspires others to do the same.  Not only does this make us smaller targets for burglars, I always think about teens who may be walking home at night... and for whom a well-lit street could make all the difference.  When my mother was young, she was walking home from a friend's house when a man began following her and threatening to assault her.  She was very lucky to find a house with lights on who called the police for her and I shudder to think what would have happened if the street had been dark.

With the thought of paying it forward, I keep our light on in the evening... and I'll admit, it's easier with a light that looks more appealing. :)  Do you have your outdoor lights on a timer?  Do you leave them on for security or do you forget like most people?  Would you consider taking this small step to make your street feel safer?

Email ThisBlogThis!Share to TwitterShare to FacebookShare to Pinterest
Labels: accessories, decor and inspiration, do you leave your porch light on, lights, neighbourhood safety, porch light, progress on the house
Business in the Front... Party in the Back!
2013-08-28T07:27:00-04:00
Taylor de Sa
accessories|decor and inspiration|do you leave your porch light on|lights|neighbourhood safety|porch light|progress on the house|
Newer Post Older Post Home
Subscribe to: Post Comments (Atom)