What's That Old Expression About Fences And Neighbours? 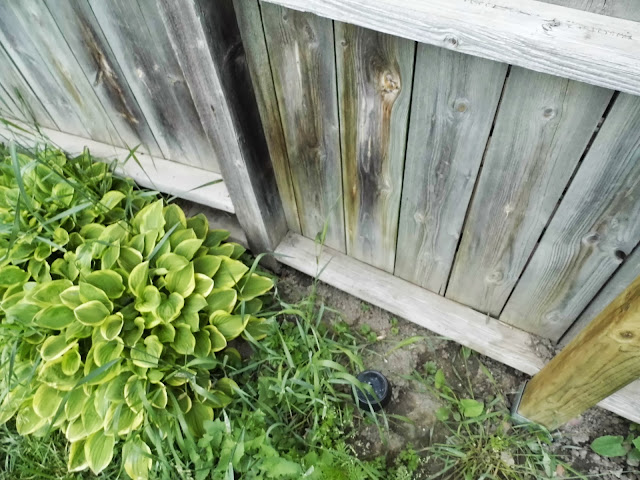 In Robert Frost's poem Mending Wall, one neighbour presses the other about the need for a fence when neither has cows that may cross into the other's property.  The second neighbour utters the famous quote, "Good fences make good neighbours."

I have always loved that line and thought of the wall as a metaphor for boundaries in relationships and friendships.  I often think of it as a good reminder to maintain a written contract, even when working with friends and family, and I even reminded myself when we moved into the new/old house that boundaries are healthy and we shouldn't become best friends with our lovely neighbours.  The one thing this quote has never made me think of, is a literal fence... until now.

Living in a freehold home offers us much more flexibility to do things our own way and we try to also let our neighbours live their own lives.  We vowed not to complain about things unless completely necessary.  We actually really like our neighbours (on both sides) and our neighbours to the left have been especially friendly and even brought over banana bread a couple of weeks ago.

Fencing disputes are not uncommon between neighbours and we hope that ours is resolved quickly.  I'll outline the story and include some pictures to give you a bit of background:

Here's what the yard looked like a few weeks ago: 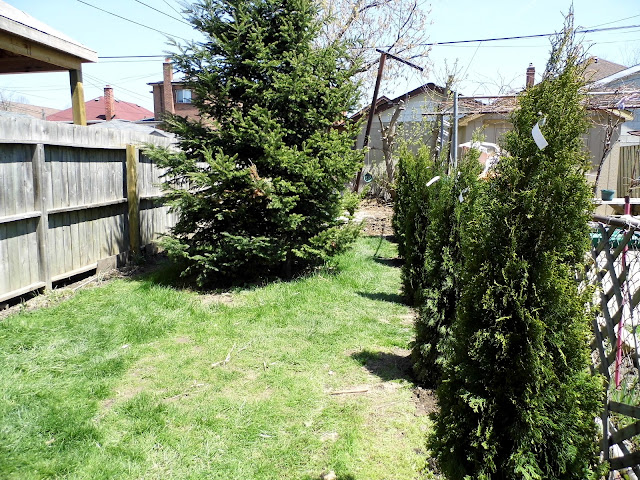 As you can see, there's an old but functional wood fence on the left side and an old chainlink fence on the right.  If we had room in our budget for a new fence, we would have installed a wood fence on the right side (we love the look of the modern styles with the horizontal planks) but we just couldn't afford it so we planted some cedars instead.  Our thought was that maybe we'd build a fence in our own style on all three sides in a few years.

One day we came home to find our neighbour to the left in our yard repairing the wood fence.  We like him and weren't alarmed to see him there since he promised to ask next time.  Apparently (we learned over the following weeks) the wood fence had collapsed onto our property a couple of weeks before we took possession and our neighbour was waiting until spring to repair it.

Over the next few weeks, our neighbour was often in our yard with contractors and friends looking at the fence and offering advice.  Corey wished he could have helped him sink a new post but you guys know what our schedules have been like this spring.

During one of the storms a couple of weeks ago, the fence fully fell into our yard.  Luckily, Barkley was inside and nobody was hurt.  At that point, it became clear that a fence repair would be necessary and that a couple of new footings would be required.

Our neighbours still seemed keen on fixing it and, at that point, I mentioned to them that we wished we could help with the cost but it was not in our budget.  I pointed out that, at least this way, they could repair it in their own style and choose their own contractor.  Our neighbours were very understanding (they've seen the work we've been doing) and told us not to worry about it.

In truth, as much as we like having a fenced backyard, it doesn't make a huge difference to us and we'd be happy to keep Barkley on a leash when we're back there since he just sleeps most of the time anyway.

We thought things were fine until our neighbour told Corey that he had accepted a quote (... For a FULL replacement!), but that they expected us to pay for half of our side of the fence since it was shared.  Since we were happy to repair the old fence (or do without a fence) Corey explained that this just wasn't in our budget this year.

I also brought it up with our neighbour and reiterated that we don't have the funds and that, furthermore, we haven't had a say in the design of the fence or the contractor being hired.  I made it clear that we'd be happy to just reinforce the old fence instead of spending the money now.  Our neighbour (nicely) said that he understands but would be checking by-laws to see if we were obligated to pay.

In the end, we think they still expect us to pay for their fence (we won't) and have already had a worker in to tear down the old fence surrounding all three sides of their property to prepare for a new fence surrounding their yard.  Here's a picture of the yard right now: 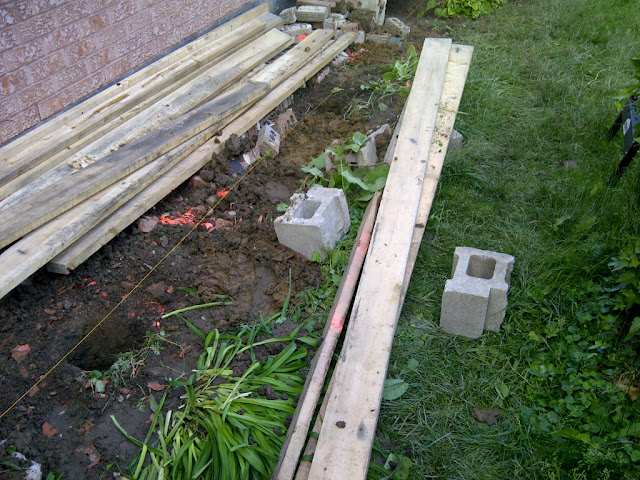 The yellow string marks where they think the property line is.  The wood, crushed plants and cinder blocks to the right are on our property... no matter which side you ask.

We like our neighbours, and think they're generally nice people, but this seems to be a classic case of miscommunication.  Here's my understanding:

They have probably been waiting to do this and figure we should pay for half of a new fence since we will benefit from the privacy.  They also probably feel they have done the work in getting estimates from contractors and arranging the work and can't understand why we won't pay for their fence when we seem to be doing so much work on our house anyway.

On the other hand, we were happy to help repair the old fence (it could likely have been done ourselves) and don't really see a benefit from a new fence, since it is not our style and not in our budget.  If we were going to replace the fence together with our neighbours, we would have had input with respect to the contractor and style but they are replacing all three sides and obviously want them to match.  We feel we are being nice by allowing their fence guy on our property (despite the fact that he trampled my flowers and broke my solar garden lights) but we don't want to be taken advantage of.

I would have loved to have been able to consult with the neighbours from the beginning and choose a fence that suited both of our tastes, but as long as we're showering in the family room, a new fence is simply out of the question.

The internet is littered with similar scenarios and we have obviously sought legal advice (to make sure we were right) before refusing to subsidize their new fence, but how does one keep relationships good with their neighbours after something like this?  We like them (aside from this disagreement) and would like to maintain a good relationship for the next several years.

Have any of you encountered a similar scenario?  What happened?  Will a freshly baked apple cake fix this?  No??  It's good apple cake...