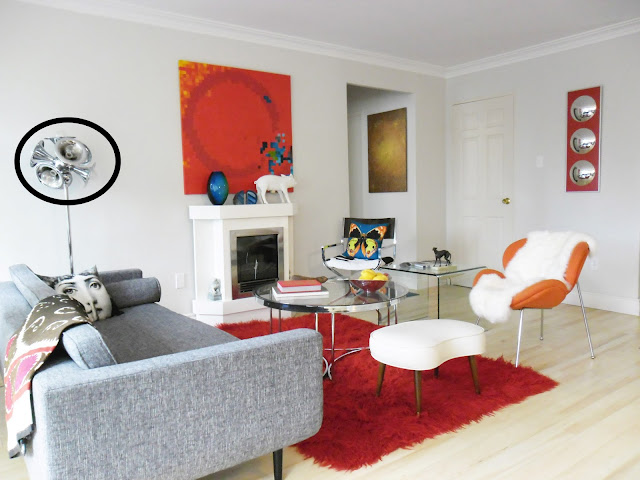 Why have I been slacking so badly with my blogging lately?  Well, I mentioned in an earlier post that the renos are starting to seem less like fun, and more like work.  To maintain our sanity, we've been taking some time off (not from our real jobs, just from the home renos) but I think we're getting our second wind and I think I'll have some things ready to show you in the next week!

Now, let's talk about that funky chrome lamp in the top photo.  It's sort of Sputnik-style and it was ultra cool in our old pad.  It was (obviously) another Craigslist find from back before we moved into the condo.  I've zoomed in on the picture so you can get a sense of what it looked like after our initial touch-ups. 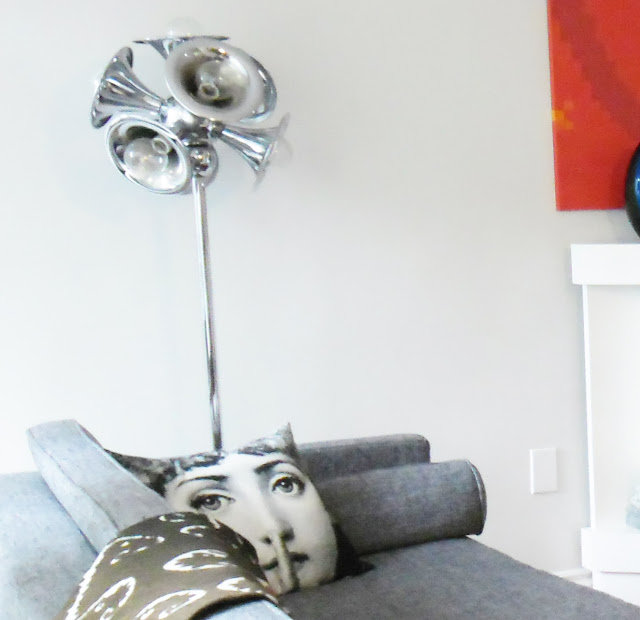 You see, when we first saw it on Craigslist, it was practically brown with rust and dirt.  The guy who was selling it lived in Liberty Village and was moving and said it was bulky to move.  We ended up paying a small fraction of what it was worth.

When we got it home, Corey tightened the connection, updated the wiring and we polished it with Blue Magic and steel wool (thanks to reading an article by my cousin Chris from styleNorth) until our fingers hurt.  The end result was worthwhile since we received many compliments on our vintage lamp over the years.

As we were prepping to move, we also found that the lamp was too bulky and a little too "out there" to bring to our new/old house.  While we didn't know if the lamp was actually designer (we couldn't find anything like it online) the trumpet shades reminded us of some of the Reggiani fixtures we found online: 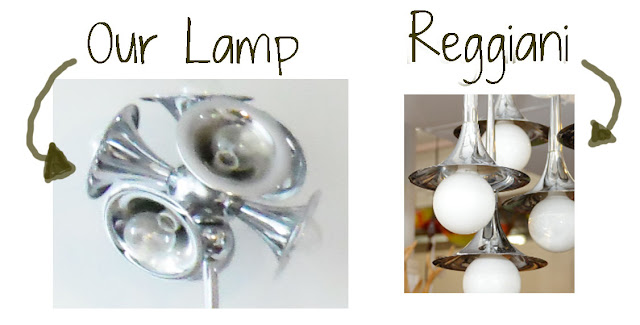 What do you think?  Well, like the previous owner, we just didn't want to move it so we took it to a consignment store that specifically deals with vintage furniture.  Because we were getting a share (60%) of the sale price, we trusted the shop owner (who would keep 40%) to sell it for as much as possible.  Could we have done better selling it online?  Perhaps, but we were running out of time and I was worried it would break during our move.
Anyway, I had almost forgotten about it when we received a cheque in the mail the other day.  Cha-ching!  It wasn't a huge amount, but it is "found money" and we've decided to put it (combined with some cash housewarming presents from our lovely moms... Thanks Trudy and Beth!) towards something that we really want for the house... and ourselves.  We opted to buy something that will make our lives easier (... and maybe just a little bit happier) on a daily basis.
Here's a list of some of the items we considered:
1.  A new stove for the kitchen.  Our current model grosses me out and, although I know it's clean, it never seems to look like it's clean.  It sort of makes me hate cooking.
2.  A dishwasher.  Do I really need to elaborate on this point?  Corey and I have been spoiled and we work such long days that it really is a chore to handwash dishes after every meal.  Combined with our lack of counter space for drying, the dishes situation makes me want to pull my hair out.
3.  A mini makeover for the laundry room.  We have some lovely new laundry machines, but I would love some shelving and a new laundry sink so that the room feels organized and clean.  It would make me feel good to finish a small room.
4.  Doors for our closet.  We're so close to finishing our closet but we need sliding doors to finish the project.
﻿
5.  A vanity for the bathroom with some storage.  Oh, how I would love this!  We are so lacking in storage and a vanity with an actual drawer would go a long way towards reducing our my stress.

6.  Plumbing fixtures for our clawfoot tub.  We bought a beautiful old clawfoot for the upstairs bathroom and I would love to relax in a nice hot bath with a glass of wine and a book.  I think even Corey would get on board if we purchased a nice rain shower head for him like the one we installed at the condo...

We have a pretty good idea of what we'll end up doing.  Which would you choose?

Pssst... For other Craigslist Scores, read this, this or this!