Exactly One Year Ago, Today... 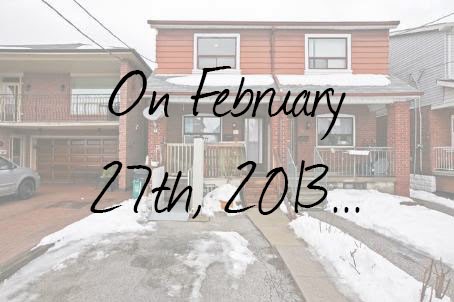 ... Corey and I first visited our dream house!

I think I told you guys part of the story of how we found our little new/old house.  I actually blogged about it in three parts (links below) and I even described all the houses and got you guys to guess which one we actually purchased!  That was fun and we were excited at the time, but I'll share a few more of the details today.  Since Corey was also really involved in the process, we'll tell you about it together. :)

Taylor: I remember the morning the sale of our condo went firm.  I was so happy that I cried.  After everything we'd be through in the condo, it came as such a relief.

Corey  Because you hated the condo so much.  You never really wanted to live there.

Taylor:  Fair enough.  That part is true.  So, do you remember me calling you at work that same day and telling you I was booking some showings for that evening?

Corey: (laughing) Yes, I do!  I remember laughing to myself and thinking, "Of course you did!  Why wait an extra minute if we didn't have to?"

Taylor:  We had wanted a house for so long and I couldn't wait to get started.  Also, if you recall, we had less than two months to be out of the condo.

Taylor:  So, I narrowed our search and booked showings at the five houses that BEST matched our criteria.

Taylor:  We ran out of time and if you recall, we were arguing and worn out by the end, so I cancelled our least favourite.

Corey:  Oh, I recall....  Actually, that one probably wasn't the worst one.  Remember that house that smelled awful!

Taylor:  The haunted house?  Yes, that one creeped me out!  Okay, so let's start with the first house.  Remember how much you loved it?

Corey:  I do!  I loved the layout and the size.  I thought it was just perfect.  My only concern was the backyard because it had three different levels.

Taylor:  That was a great house!  I remember you getting really excited about it being on a cul-de-sac.

Corey:  Oh yes, all I could picture was our kids breaking city by-laws and playing hockey on the street.

Taylor:  You loved that!  I loved the galley kitchen!  It was a TOTAL gut job, but it was much bigger than the kitchen we have now.  I remember having a moment upstairs when I thought to myself that I could see our future kids in those rooms.

Taylor:  And then we moved on to the second house, which turned out to be our house.  Although, it didn't feel like it at the time.  Remember?

Corey:  I remember being so caught up in the first house that we didn't pay as much attention to the second.  Although, I do remember thinking it was charming and that it had a good backyard.

Taylor: Yes, I remember liking the neighbourhood but thinking it was a little like a smaller version of the first house... especially upstairs.  I feel like the layouts were really similar.  Anyway, we didn't pay as much attention to this house and we moved on quickly to the third house.  I remember it snowing and us getting into an argument.  I remember it because you were walking so fast (to get away from me) to the third house that I couldn't keep up.

Corey:  You're a great real estate agent with everyone except me.  You were so harsh and bossy with me as a client.  You had an idea of what you wanted and you just walked through houses saying "yes, yes, no, yes..." and expected me to keep up.

Taylor:  Yes, I know.  I just knew exactly what I wanted us to buy and I didn't want to waste time.  I needed you to just trust me.  Anyway, the third house... I liked the garage but I was afraid of all the steps leading to the front door.

Corey:  I remember seriously worrying about you with all those steps.  Especially with groceries, or especially once we had kids.

Taylor:  I remember there being lots of cats inside...

Corey:  Oh yes, the "cat house"... I remember thinking the floor was wavy.

Taylor:  Yes, we were worried about the structure.  I did like the sloped ceilings in the bedrooms, though.  I think we had stopped arguing by the end of this showing but this is probably when we cancelled showing number 5.

Corey:  Then we were off to New Toronto!

Taylor:  I LOVED the neighbourhood!

Corey:  Until we got out of the car.

Taylor:  Oh yes, there was a weird smell in the air, but that's not what turned me off of the house.  I remember thinking as I walked up to the front door that it was so quaint that there was literally a white picket fence outside.

Corey:  But you felt creeped out in that house.  I remember you didn't want to go into the basement.

Taylor:  I know, I felt really weird in that house and I joke that it was haunted but it still makes me shudder to think about it.

Corey:  You know, for someone who loves horror movies and haunted houses, you didn't want to live in one. :P

Taylor:  I wanted to like it!  That kitchen was almost the size of our main floor in this house and the backyard had that little gazebo and it was big enough for us to have a backyard wedding.  But I just felt so uncomfortable there that I couldn't leave soon enough!  I don't know if I ever told you this, but when we were walking upstairs I was looking at the pictures on the wall and that is when I got the WORST feeling.  It sounds crazy, doesn't it?

Corey:  No...  I don't know what creeped you out so much but you definitely felt uncomfortable there.

Taylor:  I was glad to get out of there!

Corey:  So we headed home to talk about them.

Taylor:  You loved the first house and I was ready to make an offer there.

Corey:  Yes, I did.  I was really attached to it, but the seller wasn't taking offers until the weekend.

Taylor:  I'm really glad, because it wasn't the neighbourhood that I had wanted...

Corey:  In hindsight, me neither.

Taylor:  And I woke up the next morning with total clarity.

Corey:  Correction:  You shot out of bed at 6am saying "We shouldn't buy that house!  We need to buy the OTHER house!" and I knew exactly what you meant.  All I said was "okay."

Taylor:  How did you know I meant the second house?  It wasn't even in the running... Or had I been trying to talk you into it before bed?

Corey:  You tried to talk me into it a bit, but I knew it couldn't be the fourth house and I was pretty sure it wasn't the third.

Taylor:  Well, I remember you being sick that day, which allowed me to draw up the offer and have you sign it right away.

Taylor:  Yes, and there was already another offer on our house, but we got it!  And the rest is history.  Do you think we made a good choice?

Corey:  Yeah, I think we did.  It's a lot of work, but so charming.  It's perfect for us, and eventually, it will be renovated exactly to our liking.

So that's the story of the first time we saw our house.  It's a good lesson that first impressions are not always best.  We were so preoccupied that evening and emotions were running high, but when I had time to think, I was able to prioritize my criteria and that is how we ended up buying a smaller house in an ideal neighbourhood!  Here are the first pictures we ever saw of our new/old house... before it was even ours: 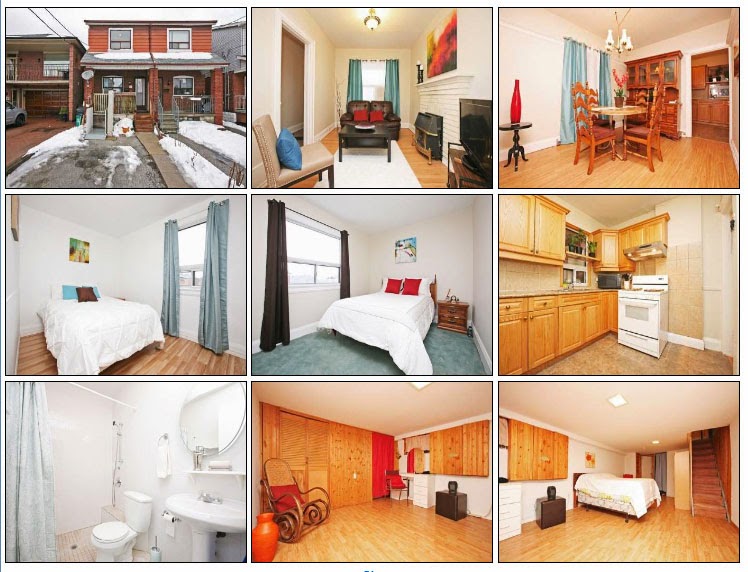 And here are some of my favourite posts that covered our move and early renovations:


First Pictures of Our House!

Our First Project: Pulling Up the Old Floors


The House is Finally Safe for Barkley to Move In!

Our Living Room on Apartment Therapy


Thanks to all of you for following along this past year.  We have loved sharing our adventures with you and we hope you keep reading as we continue to make this new/old house our home!