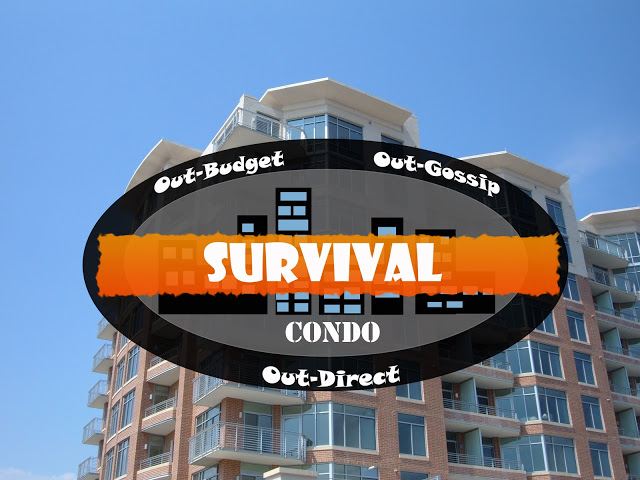 It has been a while since my last instalment, but that is because some of the events that occurred next are actually quite difficult to write about.  I'll get to that part shortly.
To briefly recap, here's a short version of what has happened so far:
Corey and I moved into our dream building.  It was our first home and we thought it was pretty cool.  We began renovating our "dream home" but then we had a flood, and were threatened and basically met a whole bunch of crazy people who did not wish us well.  We started to feel scared in our own home!

We started to speak with neighbours to find out if they had experienced similar things.  Many of them had and we met a few kindred spirits... but most of them were just... a little strange.

One former board member yelled at me until her dentures almost fell out.  I don't recall our conversation, but I know this had been a pretty irrational response.  It looked a little like this.

She may have put some sort of curse on me.  It's hard to know for certain, but I did fall down the stairs last week.  I'm not saying they're related, but who can really say about these things?  :P

Basically, Corey and I came to the realization that most of our neighbours were:

Luckily, I met some friends.  "Alex" and "Dee Dee" were normal, bright women who could also see that something was clearly wrong.  We decided that together, we could try to make a difference.

But the "other side" was watching... and next they began to complain about Barkley.

As a protective momma, I was pissed.  It was time to come up with a plan.  Alex, Dee Dee and I all ran and were elected to the Board of Directors.

It was time to clean house.

The Kingpin tried one last time to convert me to their side but I refused.  She was not happy.

We fired our property management company, hired a new one and began to examine the budget.  Within weeks, we had found over 40K that had been hidden.

Thrilled with our progress and knowing that this was just the beginning, we called a meeting to share the happy news with the rest of the owners.  Many of them were ungrateful, but I didn't really care at this point.

Oh, also at some point we saw "Robert's" private parts while he was passed out in the gym, which was supposed to be out of order.  It was pretty gross.

We were actually a little surprised that the insanity continued even with all the positive changes we had made... But we pushed forward.

A Noteworthy Character
After I was elected to the board, I had the opportunity to meet and interact with many of my neighbours with whom, I would otherwise have avoided contact.  One noteworthy neighbour was infamous for hanging out in the lobby dressed in an XXL nightgown and slippers.
During the holidays, the board hosted a potluck holiday party to encourage mingling.  I brought some crackers topped with cream cheese and smoked salmon and she picked up the tray in front of me and wrapped most of the crackers in a napkin to take to her own unit.  The joke was on her though- After I returned to our unit, Corey pointed out that the smoked salmon I had recently purchased was still in the freezer.  We estimate that the salmon I used was probably about three years old...  Which may have been (but probably was not) related to my other complaint about nightgown lady.
She seemed to save all her bowel movements for the washrooms in the common areas and stole the toilet paper daily!  It became so offensive at one point that we had to lock some of the washrooms because the lobby smelled like a dirty diaper.

Not a Board Issue
Another fun character was a very elderly and confused man who smelled so terrible I couldn't stand to be in the same room as him and was so belligerent and rude that I couldn't even feel sorry for him.  He was always very vocal at our condo meetings and often veered off topic in his ramblings.  There's one in every building.
The reason this particular character is worth mentioning is that at one point, his neighbour began complaining about his very loud... lovemaking.  I was pretty sure he lived alone and my main thought was that the noises could have been the sounds of him trying to get out of the tub... but I'm pretty certain he didn't bathe and his neighbour kept insisting that there was groaning and moaning coming from his unit at all hours of the night.
Ummm... Yuck!

No other unit owners seemed to hear the noises and the complaints eventually disappeared.... but the third floor of the building was ruined for me after that.﻿

Black Thumb
Of course the former board was upset not to be in charge and began a passive aggressive campaign for power by leaving personal décor items in the common areas without permission... and sometimes even trying to send the condo corporation the bill.
The plants were the worst!  The former board loved the ugly assortment of plants in the lobby.  Most people thought they made our lobby resemble an old lady's living room.  Our new property manager discovered that unit owners would often drop off unwanted plants in the lobby (sometimes permanently and sometimes only during their winter holidays) and nobody said anything.  We were left with a junky looking room with zero curb appeal.
Anyway, we cleaned up the plants inside the lobby and decided on two subtle looking planters on either side of the front entrance for a clean and modern look.  When a building has not been cared for at all, small changes make a big impact and everything was done by vote and with the support and feedback of our unit owners.
Of course, our former board hated this and decided to buy a planter of their own in a different style to put outside the door in rebellion.  It was tacky, didn't match and filled with ugly vines.  While I didn't really care, the act of adding things to the common areas without consent is obnoxious and was clearly meant to undermine us.  Something had to be done... And then one day, those plants mysteriously died.

To this day, I will not admit to anything... But if I had done it, I would have poured boiling water from my thermos in those plants each night as I walked Barkley.  One day, when the plants had died, some fellow board members and I may have moved the planter to get it out of the sun and maybe it would have fallen and cracked... We would have laughed at our silly revenge at the people who had tormented us and so many others.
... Luckily, I didn't have to do anything because those plants slowly died and one day the broken planter mysteriously showed up in the trash.
Tragedy Strikes
One night, Corey and I were startled awake at about 3 o'clock in the morning.  There was loud, frantic knocking at our door.  It is a testament to how often this sort of thing happened that I told Corey to ignore it and go back to sleep.  But it didn't stop.
Our super had collapsed and his girlfriend had been looking for me.  Corey called 911 while we checked what we could of his vitals.  Firefighters arrived and then the EMS.  They worked on him for hours while I looked for his health card or identification.
His girlfriend didn't help... not because she was worried and distressed, but because she had to go to work and was hoping that Corey and I could handle things so that she could leave.  I didn't end up finding his ID so he was taken to the hospital as a John Doe.  I did manage to contact his ex (the mother of his only child) to meet him there.  She also had to work... but at least she sounded concerned.
Sometimes getting a glimpse into someone's life can be very sad and difficult.  His unit smelled like cigarette smoke and rancid oil from a deep fryer that had never been cleaned... but there were also toys and traces that he had been a loving father to his son.  People are never all bad... or all good.  Corey and I had always been at odds with our super... but in the end, I didn't have the heart to explain this to his ex and I served as her building contact and listened to her cry over the next week as she discovered that he would not be waking up.  I still feel guilty for not being kinder to him while he was alive.
A New Face
It was a sad event, but time marches on and the temporary company we had hired was becoming expensive.  As a board, we looked at the budget and determined that our small building would never need a live-in super.  Not only would we need to pay insurance etc. on a live-in, but we would also lose the opportunity to sell the super's unit and finally put some REAL money into our reserve fund.  Our research showed that other buildings our size contracted companies to clean and conduct repairs during the day... even after a few weeks, our building was much cleaner!
We decided not to try to sell the unit just yet and to wait to ask unit owners at the next meeting.  In the meantime, we found a good quote and our new super began work.  Some owners expressed concern that we would no longer have a live-in super, but most of them were happy with the idea once they understood our budgetary issues.  We were still in survival mode and needed to build our reserve fund.
Still, a few still argued and some even wanted a concierge AND a super.

Our new super seemed young, eager and energetic.  We thought he would be just what our little building needed.  He immediately cleaned the building from top to bottom and began working on other projects.  He seemed eager to paint our gym so that we could re-open it and even began patching the hallways in the basement to prepare to paint.
Of course, no good deed goes unpunished and it wasn't long before people began leaving him obnoxious notes like this one:
﻿ 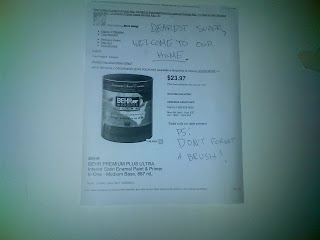 At the time, I was annoyed that people were being rude but I was hopeful that our new super would not get sucked into the crazy...  I really hoped....