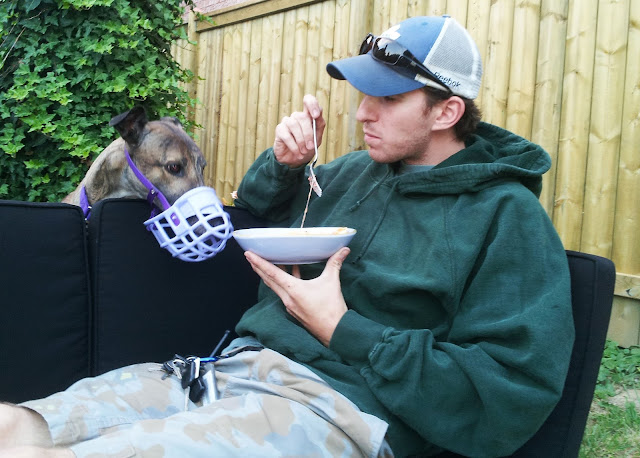 How did you spend your weekend?  In Toronto, we've been getting storm warnings almost every weekend and I'm starting to wonder if someone at the weather station just wants less traffic on the way up to the cottage.  Seriously, this is the second or third weekend that we've opted out of camping due to threats of bad weather, only to have ideal conditions in the city.

I especially wanted to do something special since I had received some exciting news on Friday, and I was hoping to celebrate with a day off work and some R and R!   (After probably the most intimidating panel interview of my life last month, I was selected to sit on the Toronto Real Estate Board's Government Relations Committee!  It was very competitive and being selected is a huge honour so I'm really excited for an opportunity to make a larger impact on the real estate industry in the GTA!)

For once, we decided to "screw the house" and just enjoy some time together.  It felt good to go an entire weekend without either of us picking up a tool and, while I inexplicably detest the term "stay-cation", that's exactly what it felt like.

I worked most of the day on Saturday but by the evening, we were officially on "holiday" and we spent our time catching up on Big Brother (LOVE Amanda) and just relaxing.

On Sunday, we headed to the Aberfoyle Antique Market, because, after reading my blog post, Corey wanted to see it for himself.  We got some great ideas for the house, and I found it really interesting going with Corey because he pointed out things I would never have noticed.  I'll post some pictures of this trip later in the week.

Later in the day, we finally splurged and purchased some patio lounge furniture.  We've been comparing prices for a while and the final decision took hours of testing different chairs in a few stores.  We specifically looked for a decent-sized backyard when we purchased our house, so it was very important that we have a chance to fully enjoy it this summer.  We're thrilled with the set we chose and it was over 60% off so it didn't cost an arm and a leg ...maybe just a leg, But it's so worthwhile to finally have a space we can enjoy!  I'll post pictures of our new backyard oasis later this week!

Anyway, we spent Sunday evening lounging outside with a bottle of wine and our books.  Corey even ate dinner outside but quickly learned that Looch gets a little too curious... (photo above) After the sun had set completely, we brought out a laptop and snuggled under a blanket as we watched old episodes of 24.  It was so perfect that I think this will be our new summer tradition for Sunday nights!

Do you give yourself a special license to relax or indulge in something special on Sunday nights to take away any "Sunday night blues"?  What do you do to gear up for the work week?