How to Paint a Clawfoot Tub

Have I ever actually told you guys how we found the clawfoot tub?  I could swear that I wrote a post about it about a year ago but now I can't seem to find it. 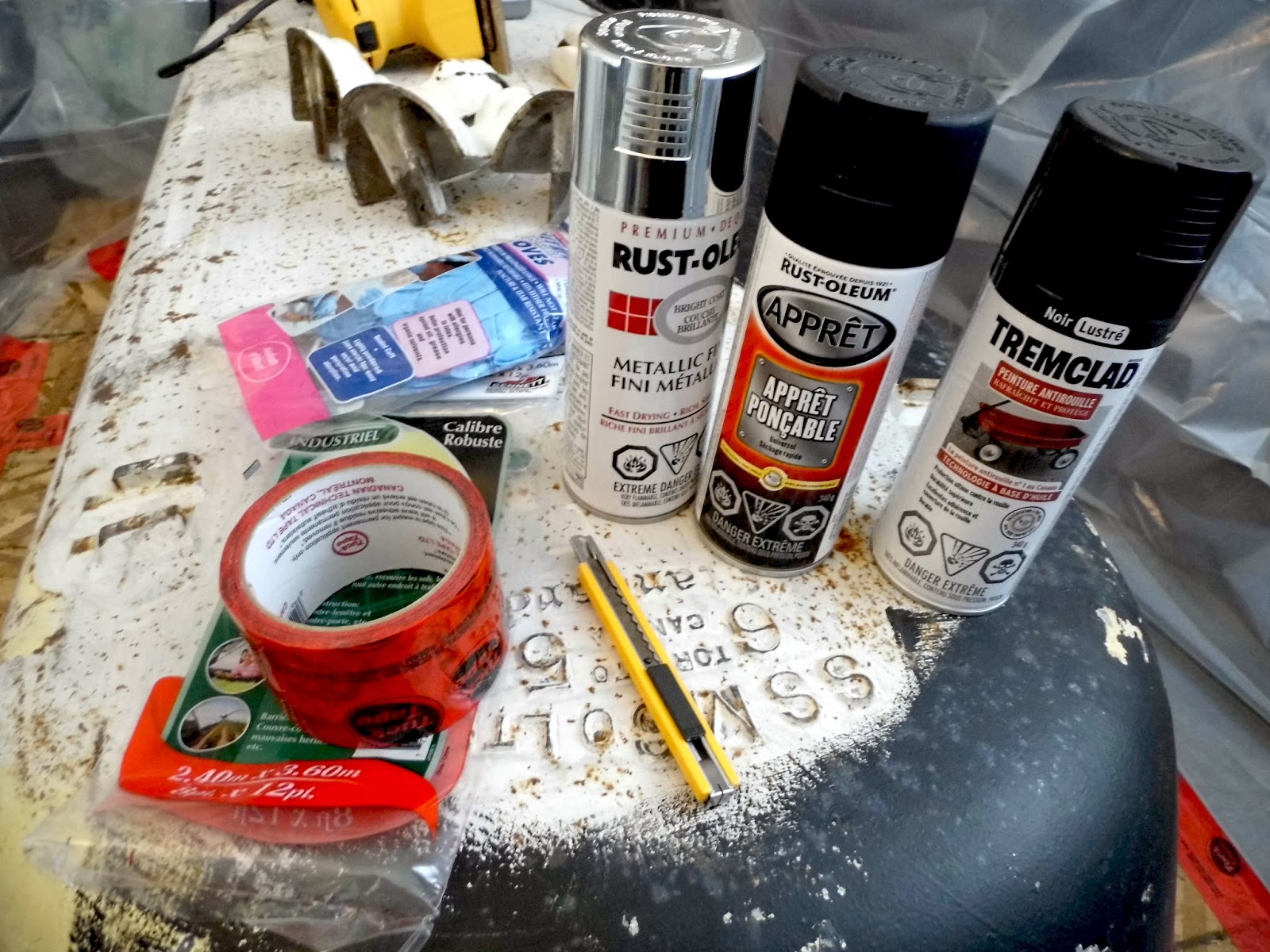 We had just purchased the new/old house but we hadn't taken possession yet so we were hoarding gathering furnishings and materials and selling our old stuff on Craigslist.  We knew the upstairs bathroom was lacking a tub (see photo below) and we were trying to decide whether we would add a tub or just make a beautiful large shower. 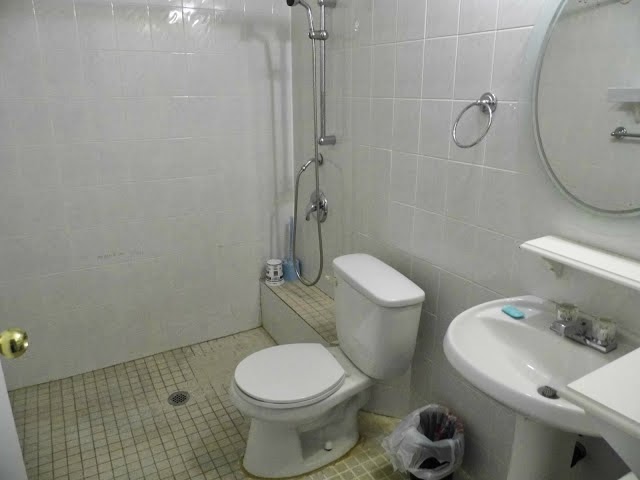 One day, while I was trolling Craigslist, I came across a clawfoot tub for sale.  The sellers were asking only $300, but what struck me was the fact that it came from their house, which was built in 1926... The very same year our own house was built!  I couldn't resist the idea of an antique tub that could actually be original to a house like ours, so we purchased the 250 pound cast iron monstrosity and moved it into our house!

Unfortunately, the weird ledge in the bathroom, didn't allow us to actually put the tub on the floor, so for several months it balanced precariously there and rocked any time your elbow should accidentally knock it. 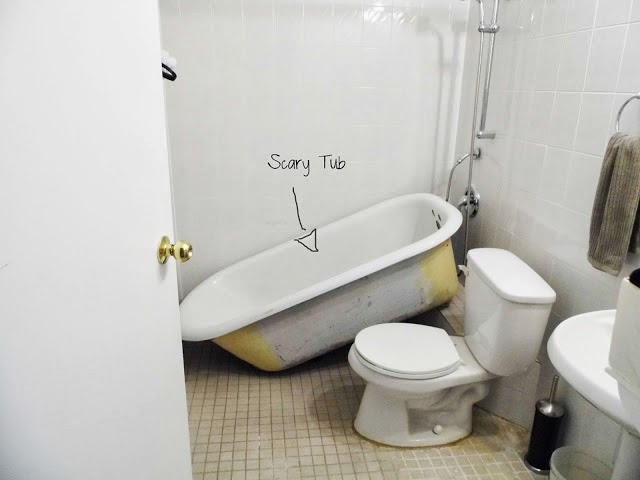 We stored the feet in a plastic bag downstairs, and as the months passed, I began to forget what they even looked like.

Eventually, it was time to begin work on the bathroom, so Corey moved the tub to one of the bedrooms, 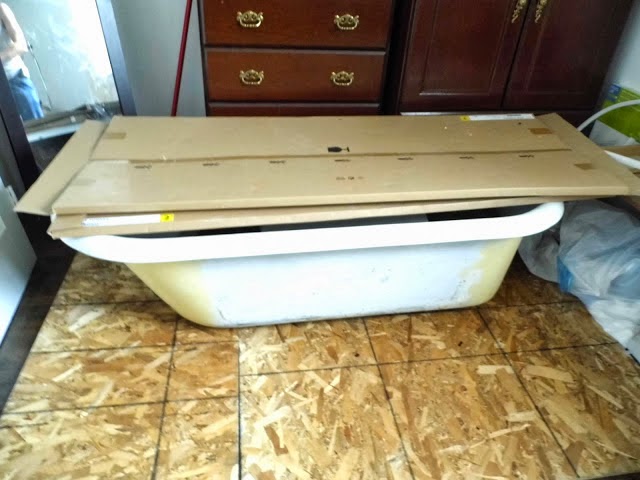 It is too heavy to move up and down the stairs, so we've been making jokes for months about how we'll need to "Dexter" the room (cover it in plastic) when we paint the tub.  Yes, the picture below looks weird if you're not a fan of the show. 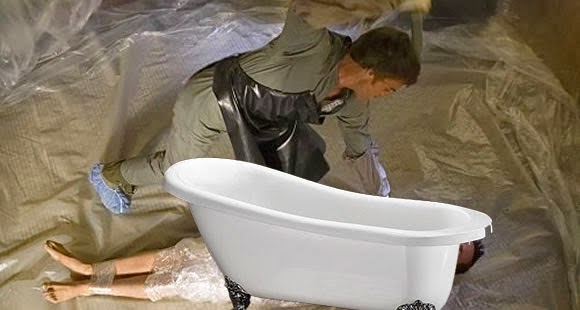 Meanwhile, I've been searching for inspiration photos.  We ordered chrome hardware for the tub, so I thought it might be nice to paint the feet chrome as well.  I also like the idea of a black tub, and I found this faux antique version on Overstock.com which is close to what we want, only we prefer a glossy finish. 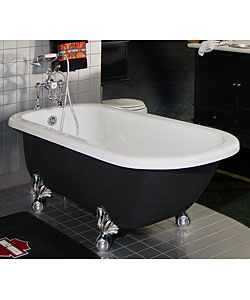 I really liked the way the chrome feet popped in the picture.  At the time, I couldn't even remember what our own tub's feet looked like and I hoped they were as nice as these. 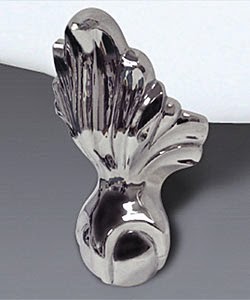 Corey and I gathered some supplies:
- Gloves
- CLR and Steel Wool (to clean the tub and feet)
- A Sander (to remove some of the rust and old paint)
- A Respirator
- Lots of Plastic and Tape (to protect the room)
- Rust Paint (black primer, glossy black, chrome)

While Corey prepped the room and began sanding, I worked on cleaning the feet. 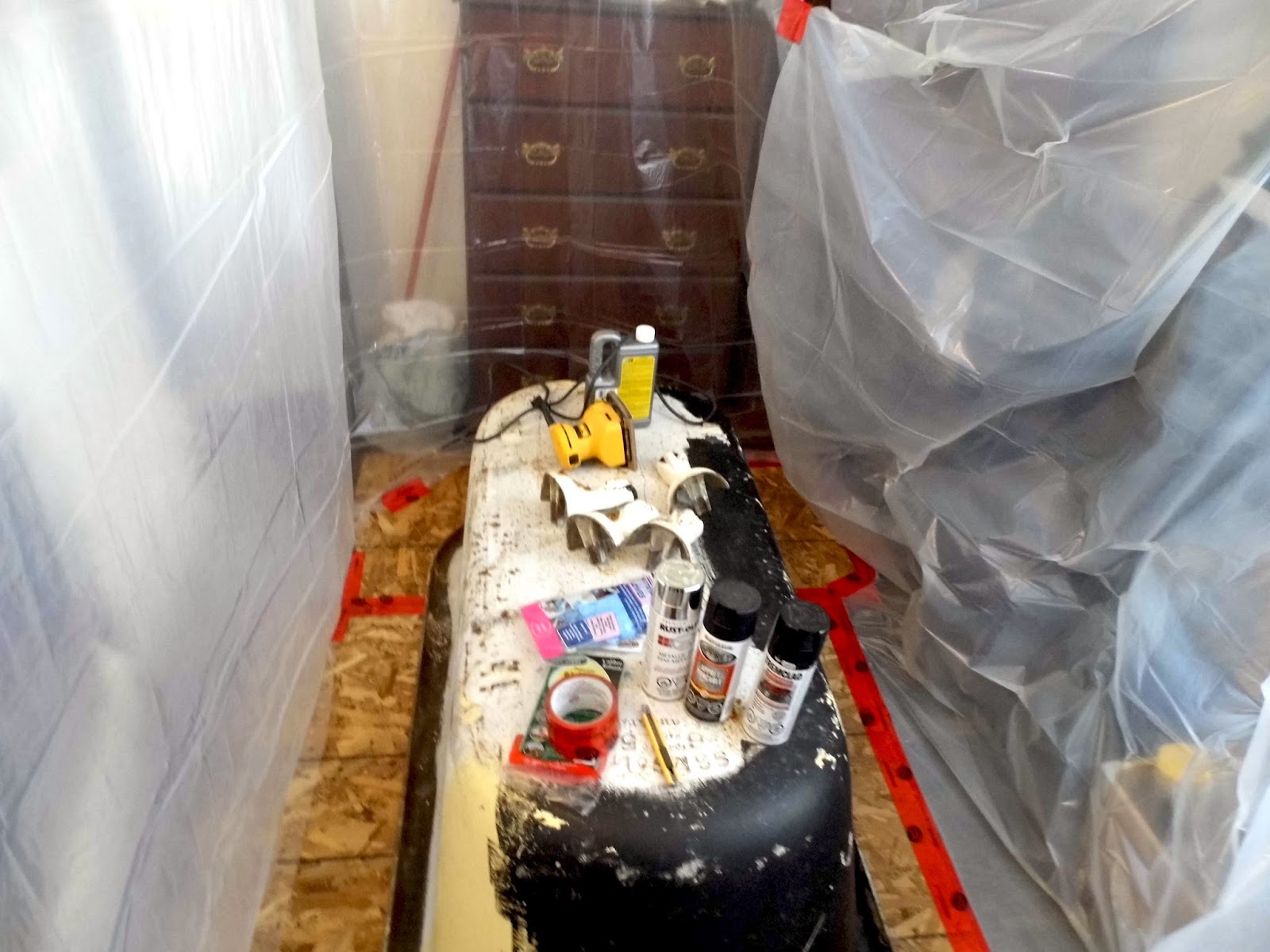 They were so rusty and gross, that I could barely tell how nice they were. 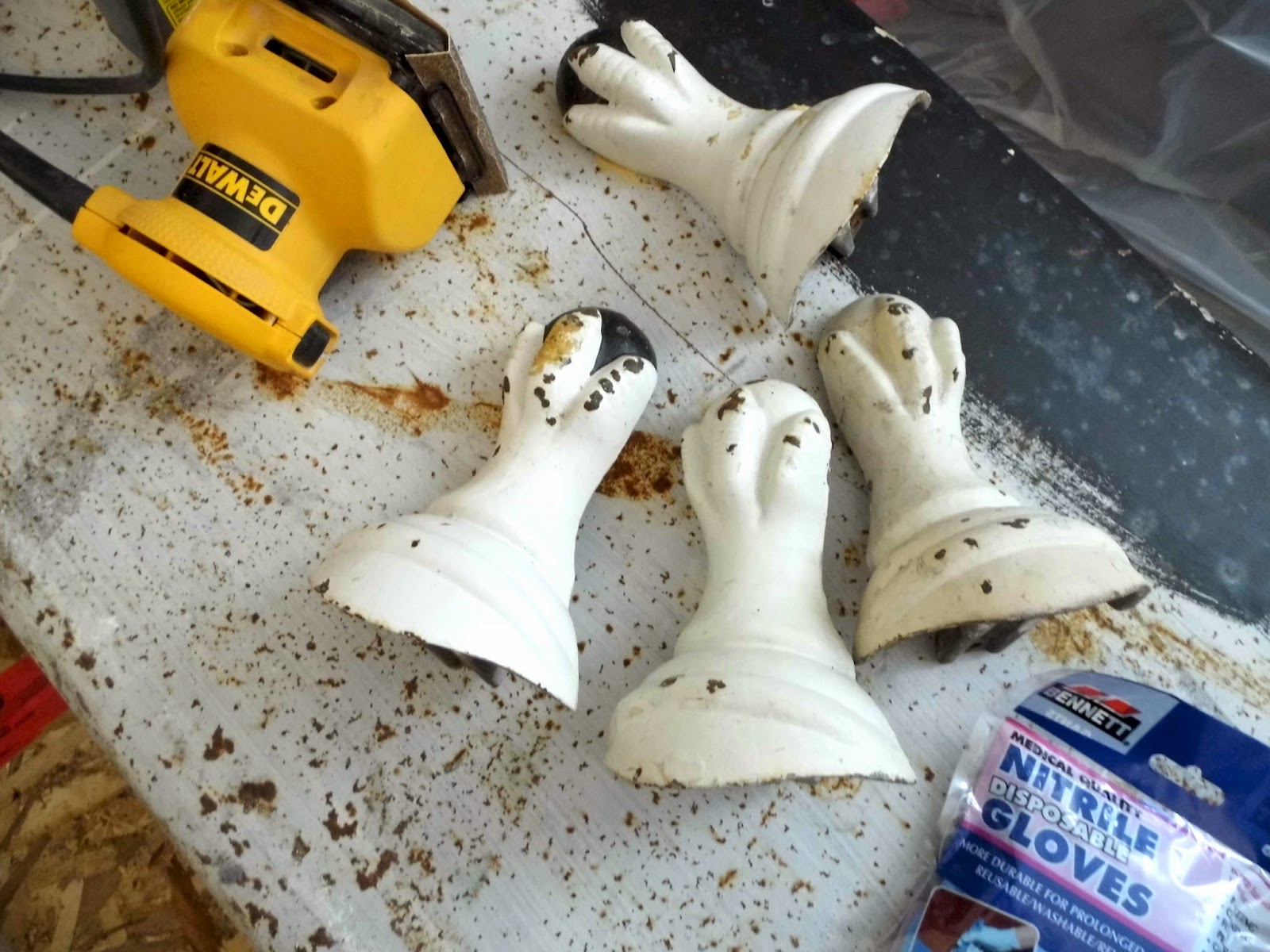 I cleaned and spray painted them in chrome. 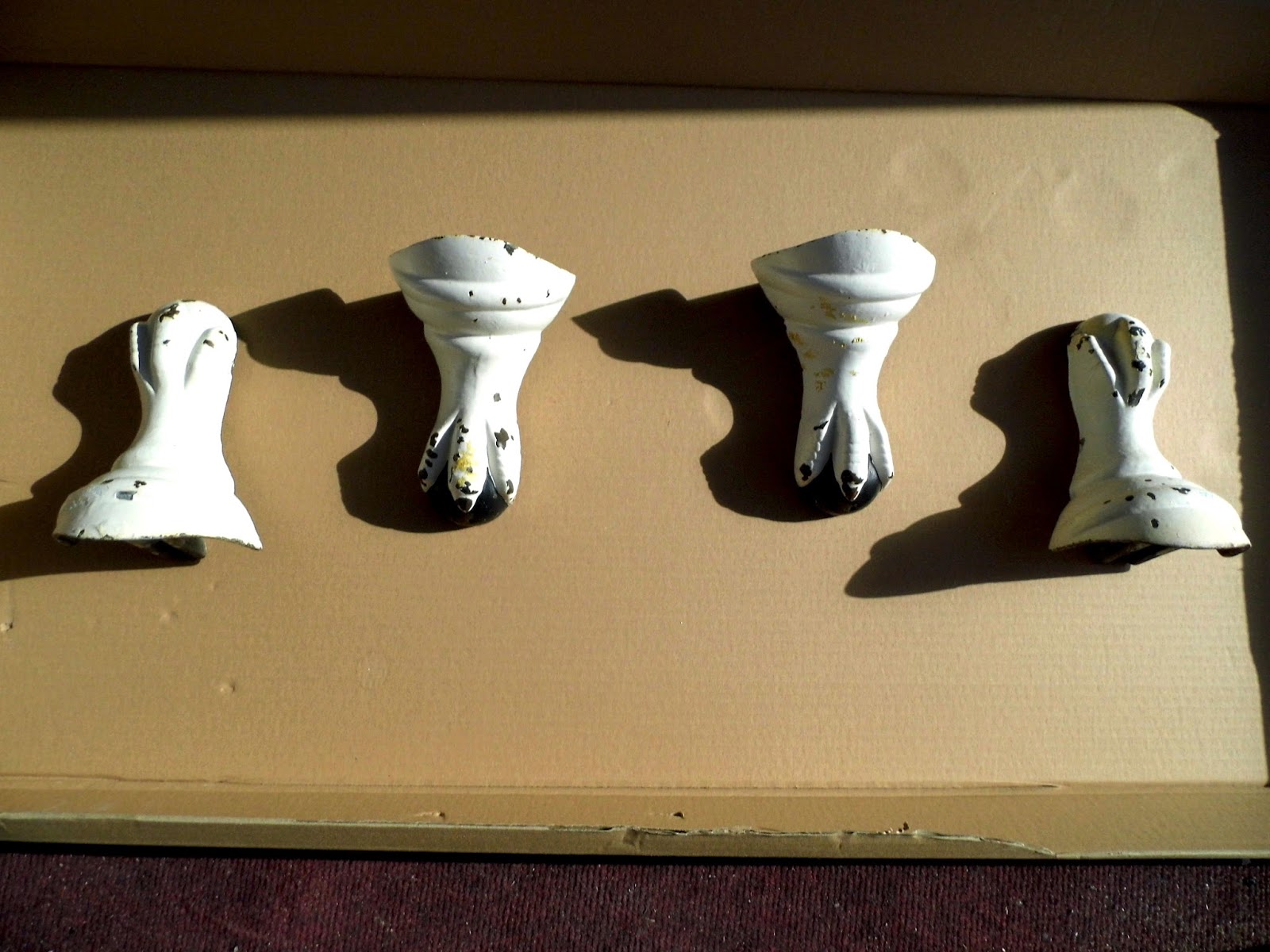 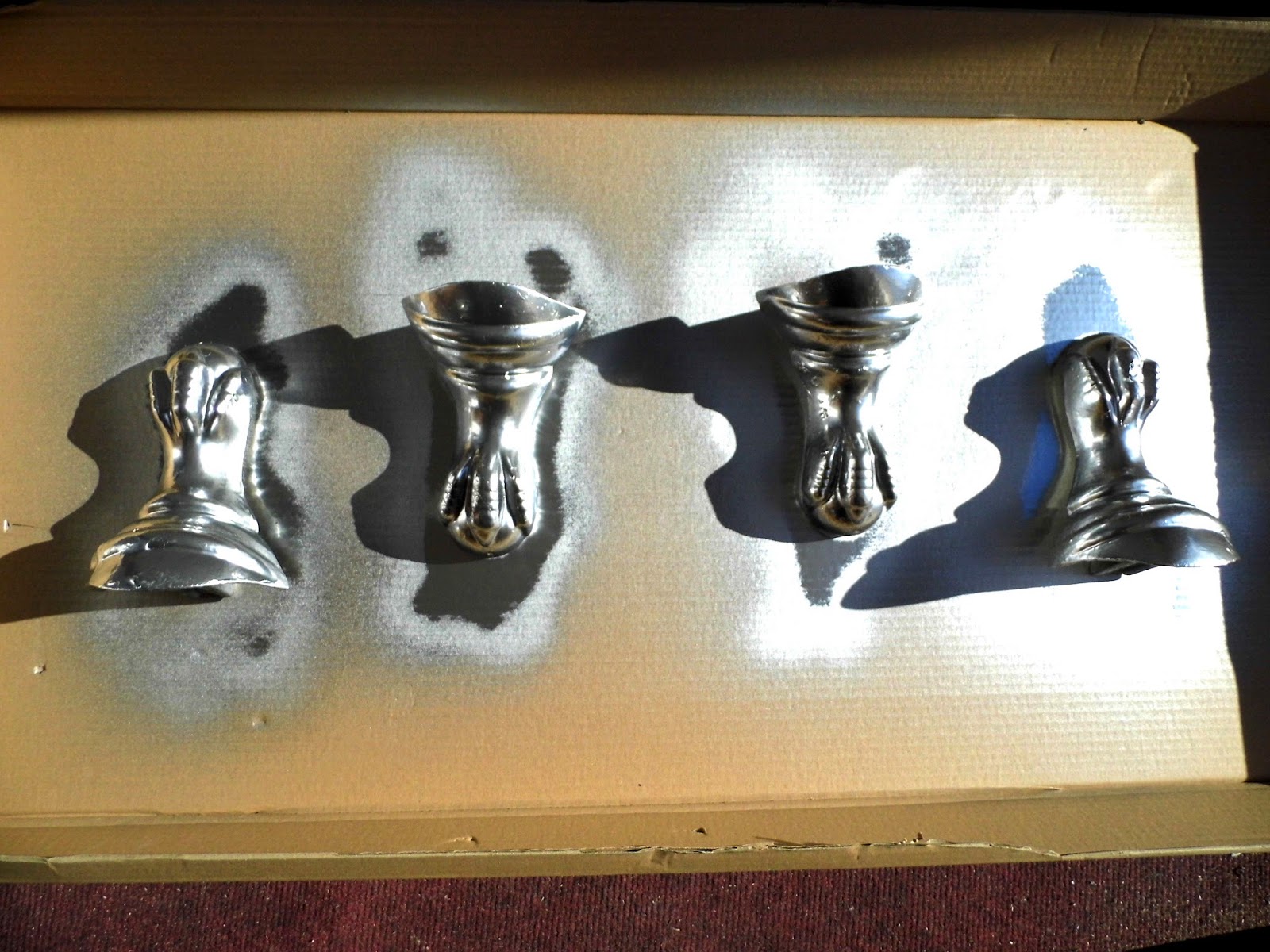 It turns out that the chrome paint brings out the details in the claws and they actually look like talons.  I think they're even nicer than the version we found online. 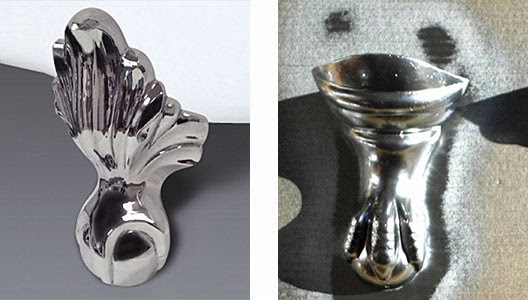 Once the tub was sanded, we applied a primer coat. 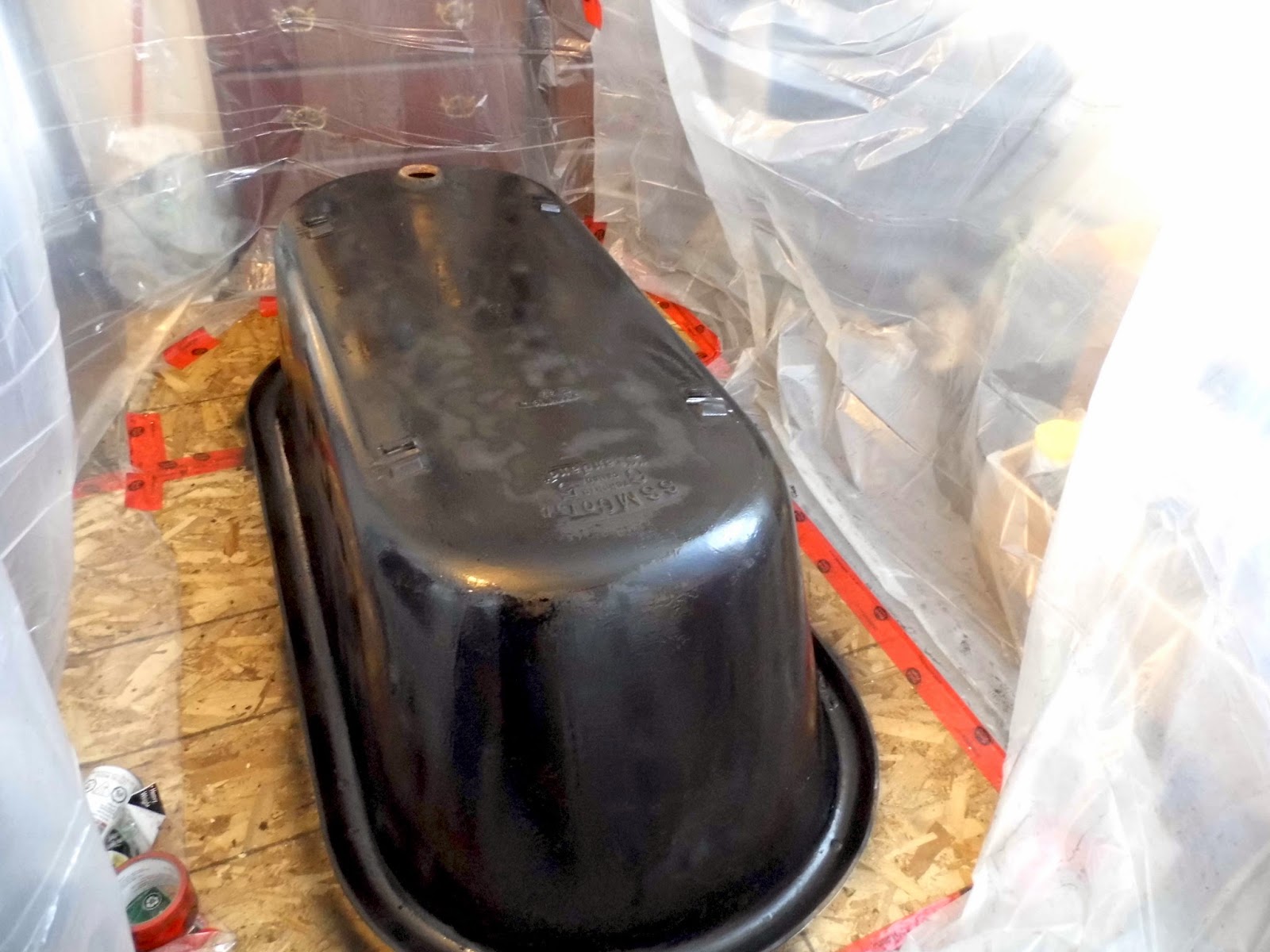 We decided it would be wasteful to use the glossy paint on the back and bottom of the tub, so we focused on the visible surfaces.  I tried for thin, even coats to minimize dripping. 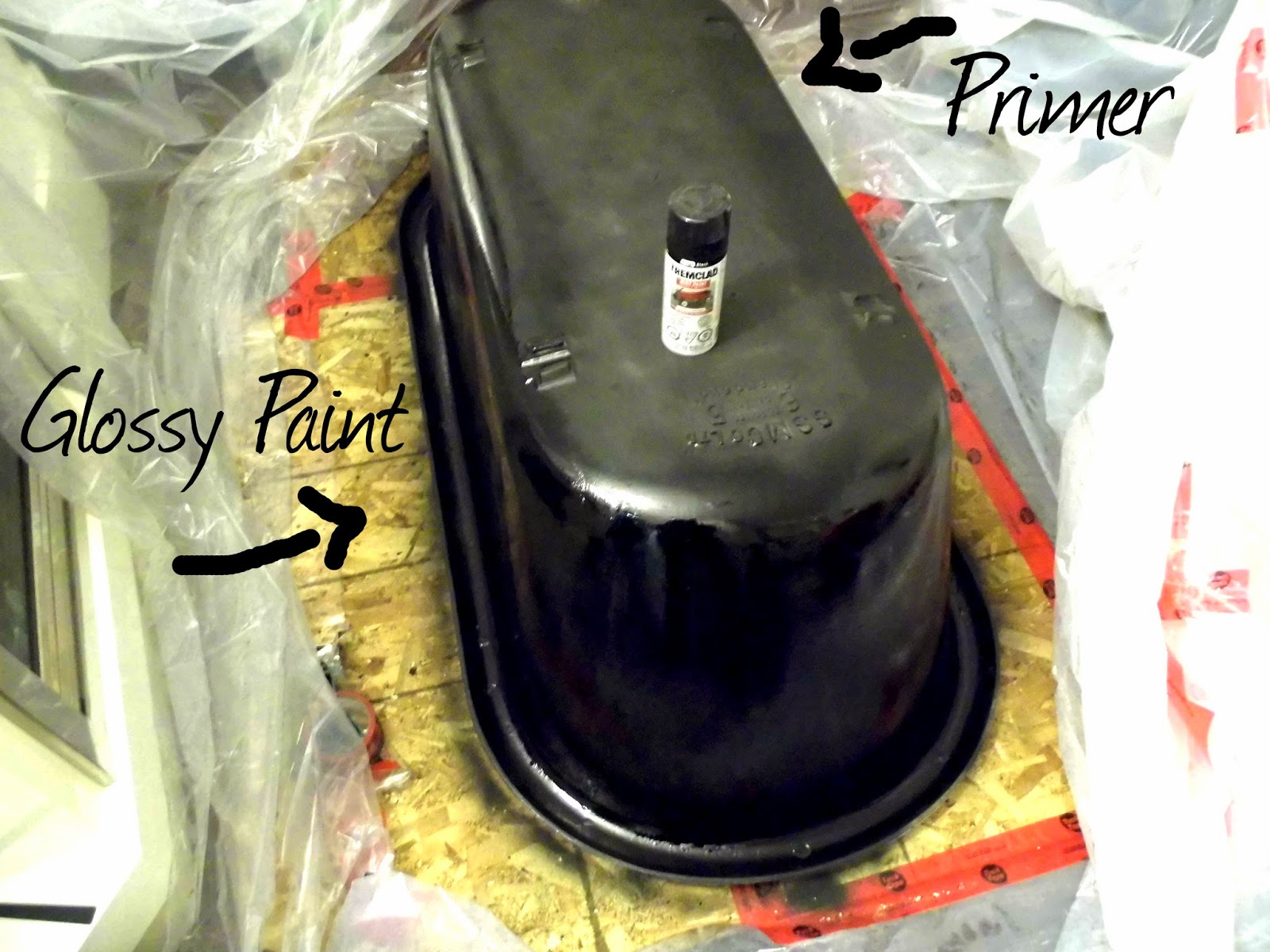 And we added our mark on the bottom, since this tub will probably live in this house far longer than we do. 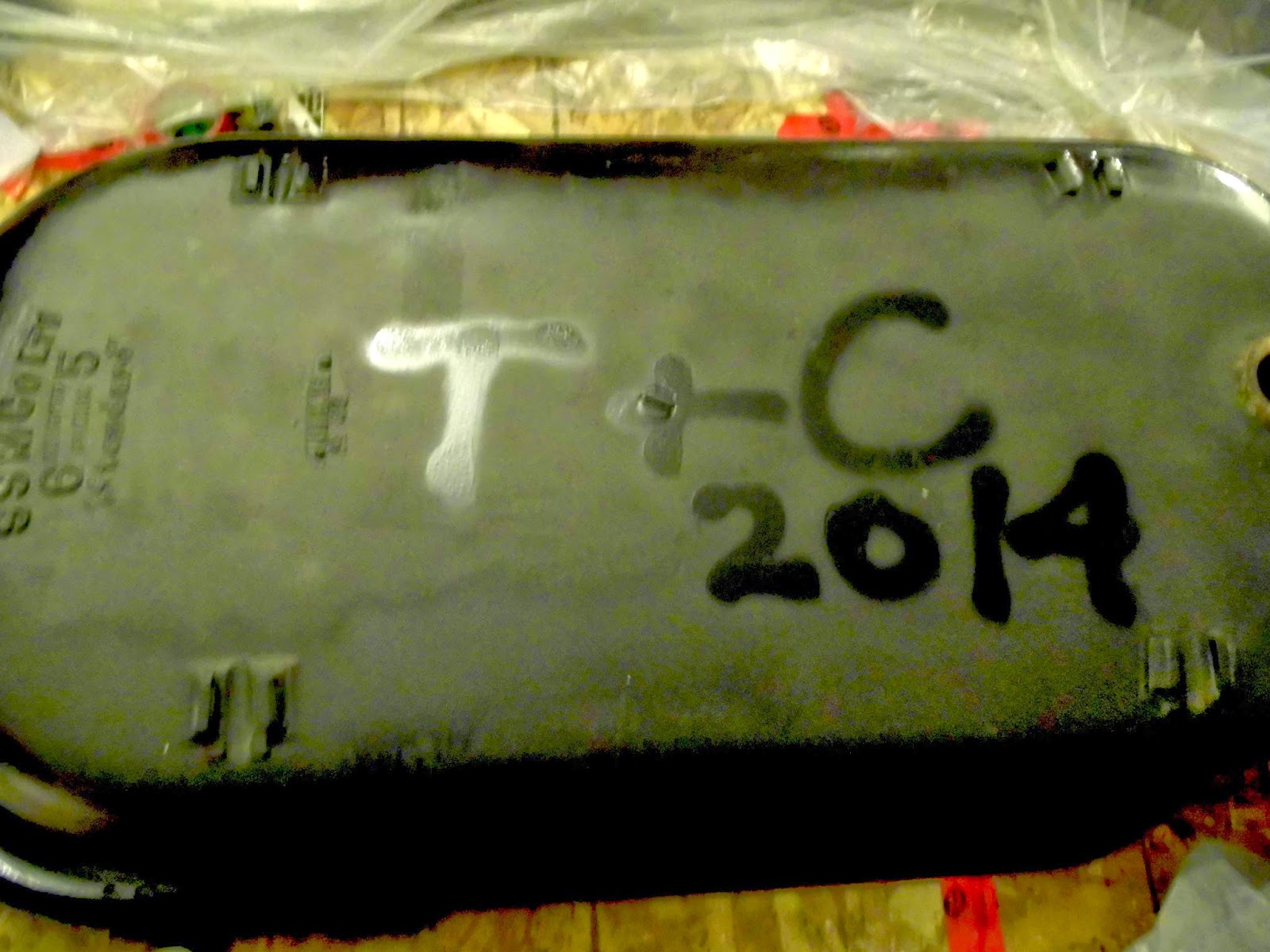 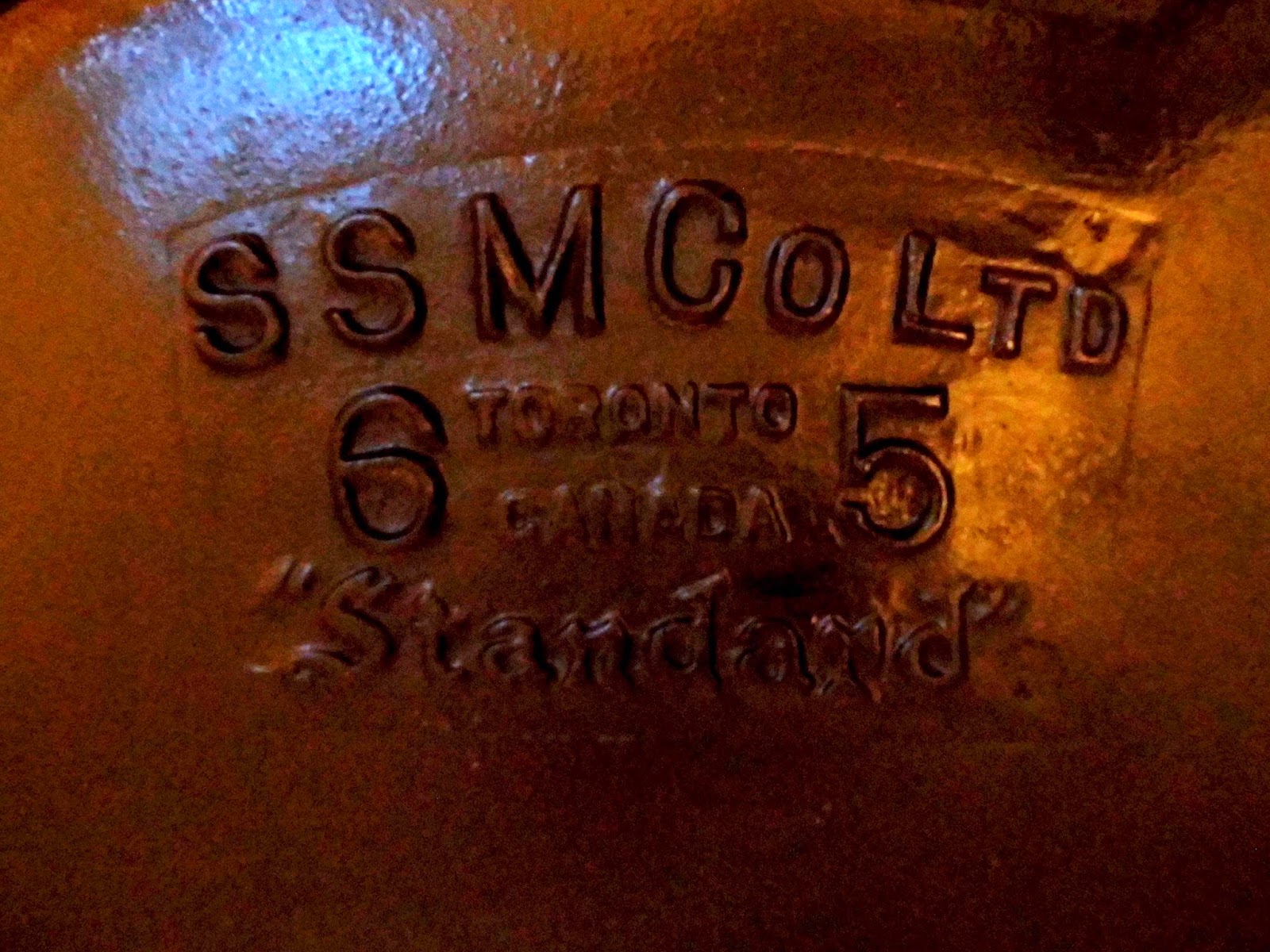 I was quite pleased with the finished product.  Remember, the bottom won't be visible once it's in place. 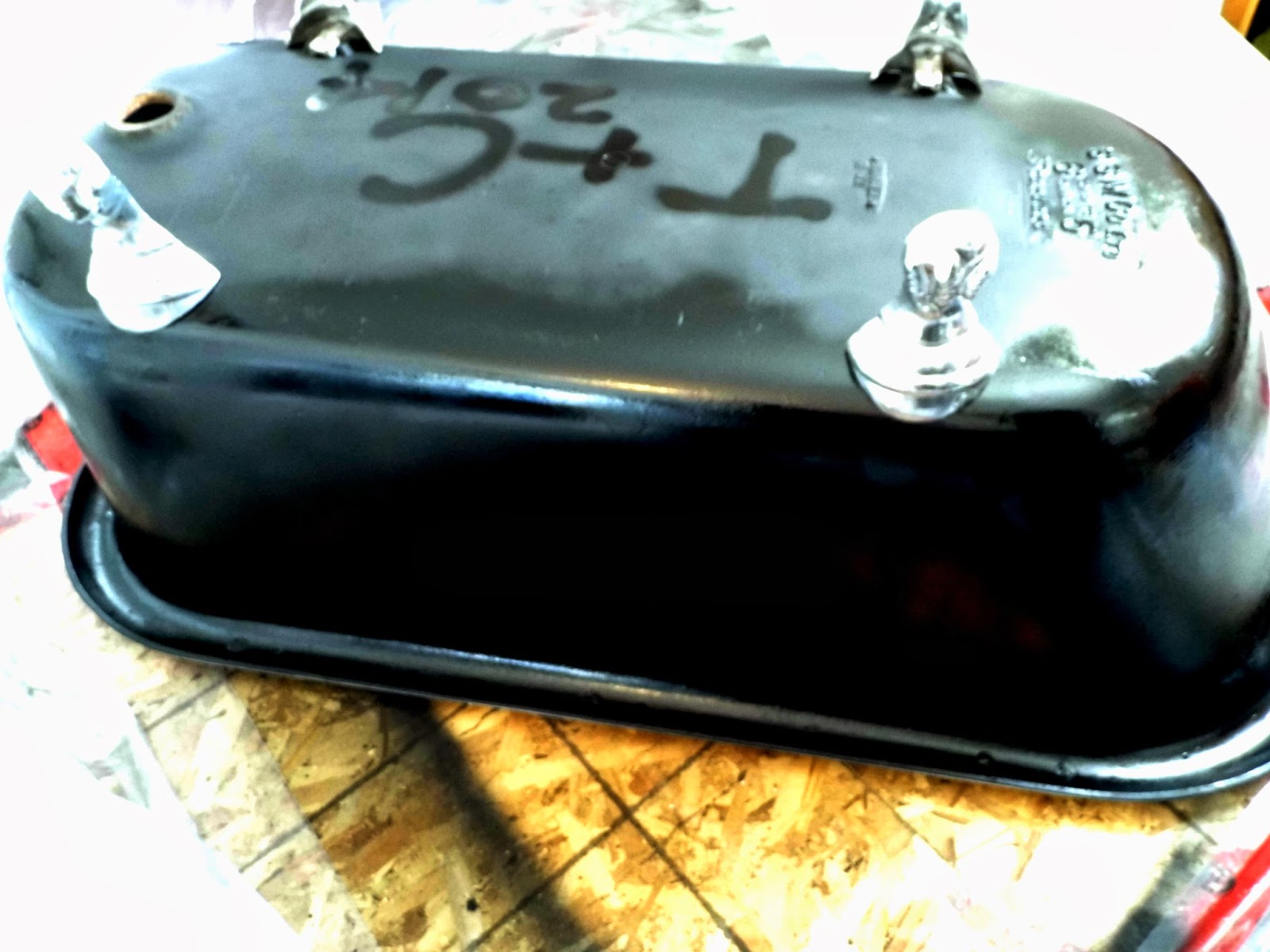 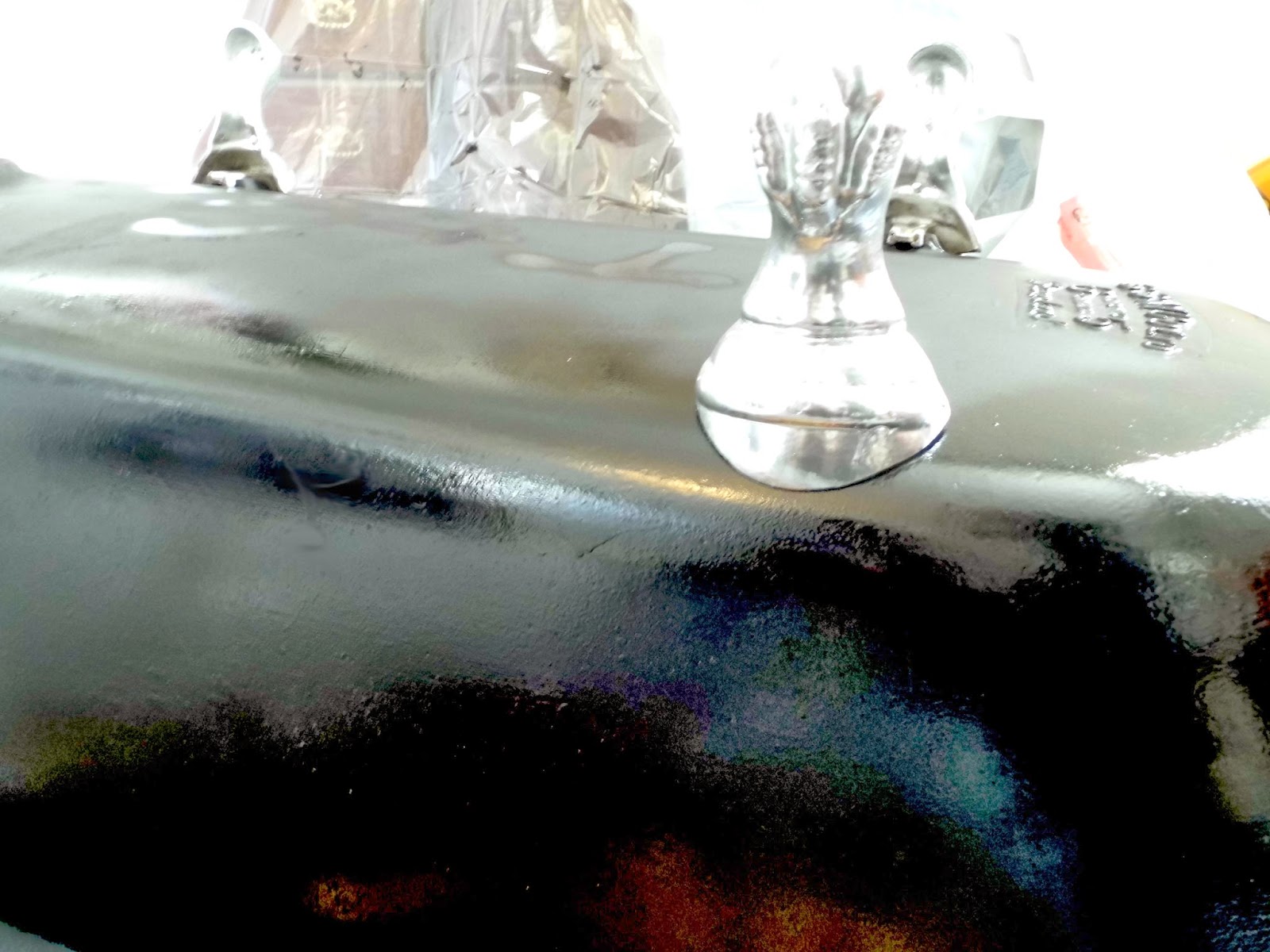 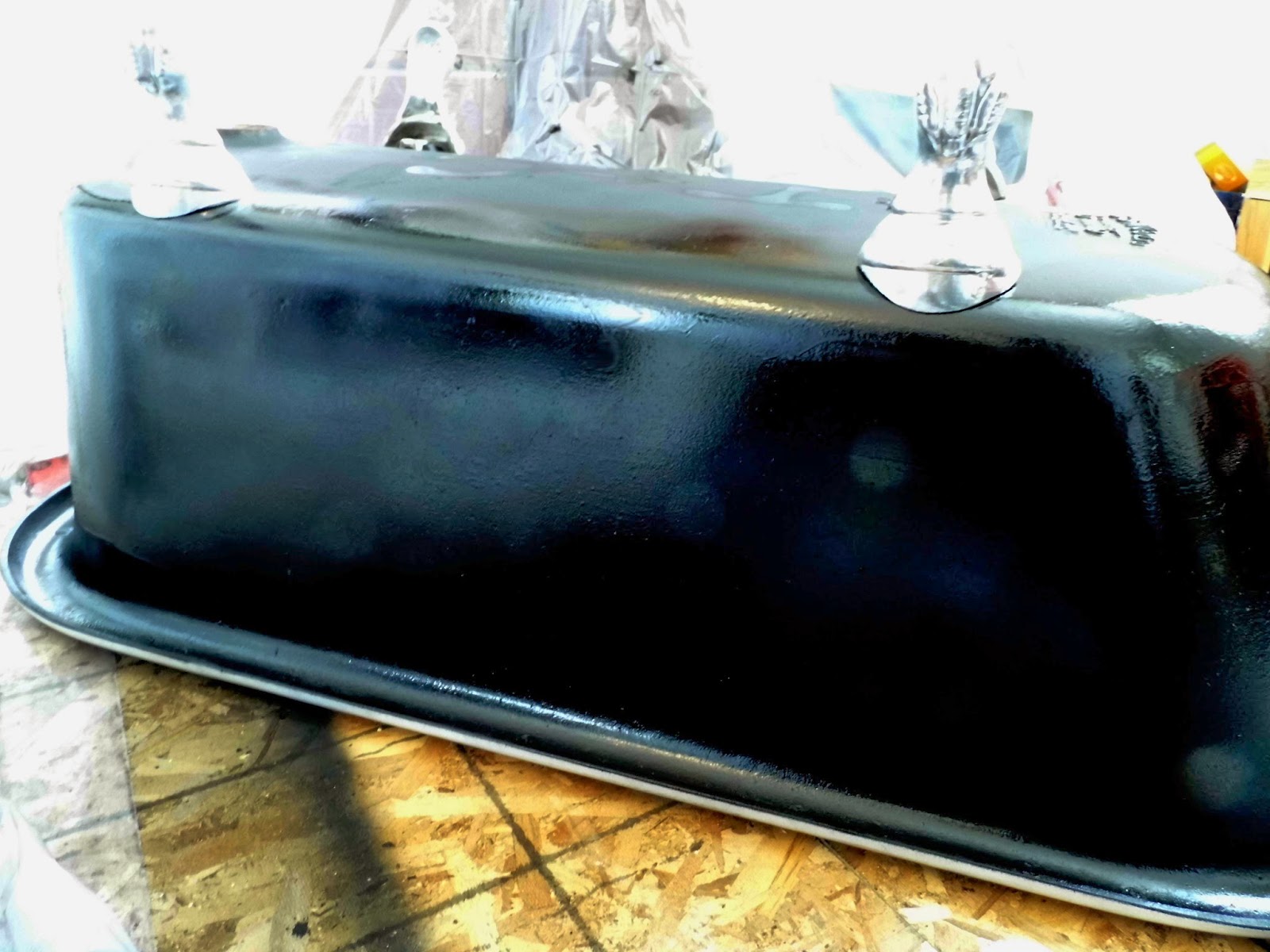 I can't wait to have the inside reglazed!  What do you think?