Our Family is Growing By Two Feet... AND Four Paws! (Meet Cheetah) 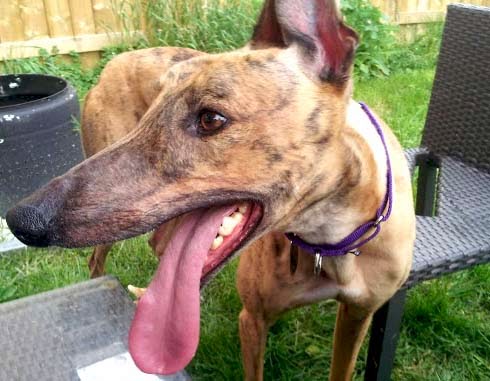 So, if it wasn't exciting enough for our family to be growing by two feet, we thought we'd add another four paws.  Yeah, we're crazy like that!  And we are completely aware of how crazy the timing seems... because most people who are renovating an old house while planning a wedding and prepping for a baby would probably not choose to adopt a 75 pound dog.... But we never claimed to be most people!

Here's how this actually came to pass:  We've actually always sort of assumed we'd be a two dog family.  You know how you have vague pictures of your family in your mind?  Well for us, there were two kids and two dogs.  Greyhounds are low-energy and they enjoy the company of other greyhounds, so it seemed natural.

That is, until we began fostering other greyhounds and we discovered that Barkley is a bully who basically makes life miserable for other greyhounds who have tried to live with us.  Seriously, if one of them cries, he will run over to bark at them until they're quiet and heaven help them if they accidentally bump into him in our narrow hallways.  Barkley essentially steals their lunch money and gives them wedgies... or whatever the dog equivalent of that is.

We ran through fosters Louciano, Friendly and Monty this year and while Barkley and Friendly seemed to get along fairly well, we never got that feeling... you know, that feeling that something feels right.

I actually started to feel a little sad about how we'd probably never get another dog once the baby arrived and I'd been worried about Barkley feeling neglected or lonely once we're preoccupied with little Singleton.  Enter Cheetah.

Cheetah was supposed to be just another foster but he and I bonded right away.  He is the opposite of Barkley in many ways (very athletic and VERY affectionate) and yet Barkley didn't seem to hate him.  Of course, there were some growls at the start, but Cheetah was so affectionate and persistent that eventually Barkley sort of gave up and accepted him.  He even let him cuddle up at night! 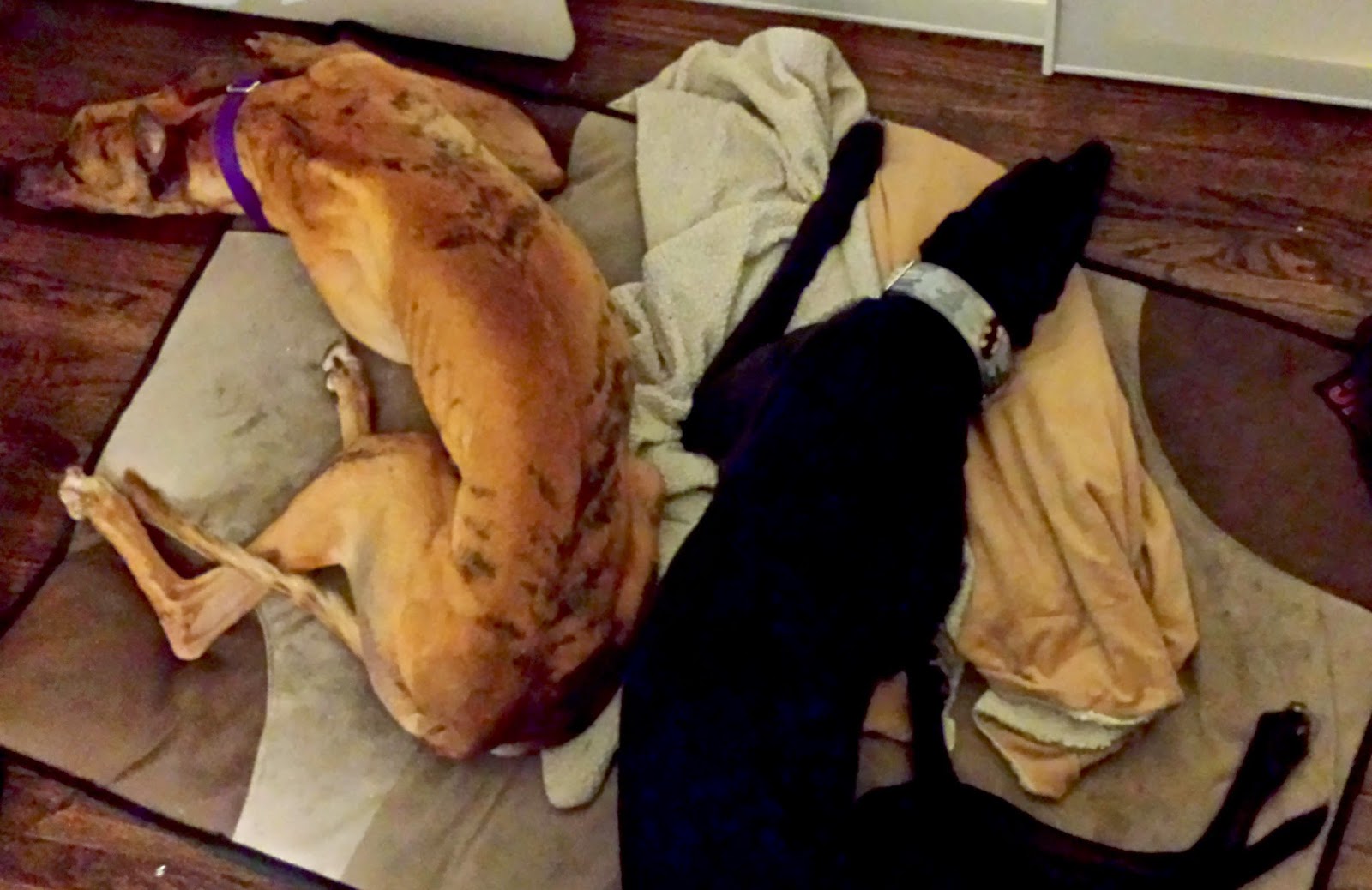 By the end of our two weeks of fostering Cheetah, Corey and I were desperately trying to distance ourselves from him.  I think we both knew he was a good fit for us but neither of us really wanted to say it.  This pretty boy who roots through garbage like a raccoon, has a tongue that's so long that it comically pokes out of his mouth at times, howls like a Husky, climbs over tables to get to you and gives the fiercest cuddles, had weaseled his way into our hearts (and Barkley's) and we knew giving him up would be tough.  When I filled out my foster report, I outlined just how amazing he was but recommended that he go to a family with another dog (since he's such a social boy) or who lived in a house in case he howled during the day.

The e-mail I got back from our director of adoptions urged me to break him of the howling habit since all the applicants lived in condos.  Little did I know at the time, that was code for, Are you sure you don't want to keep him?

Corey took the news as fate and called the director back to ask about the possibility of us adopting him.  He didn't want to discuss it with me unless he knew it would be possible.  Her reply was that if it were best for the dog, it was never off the table. 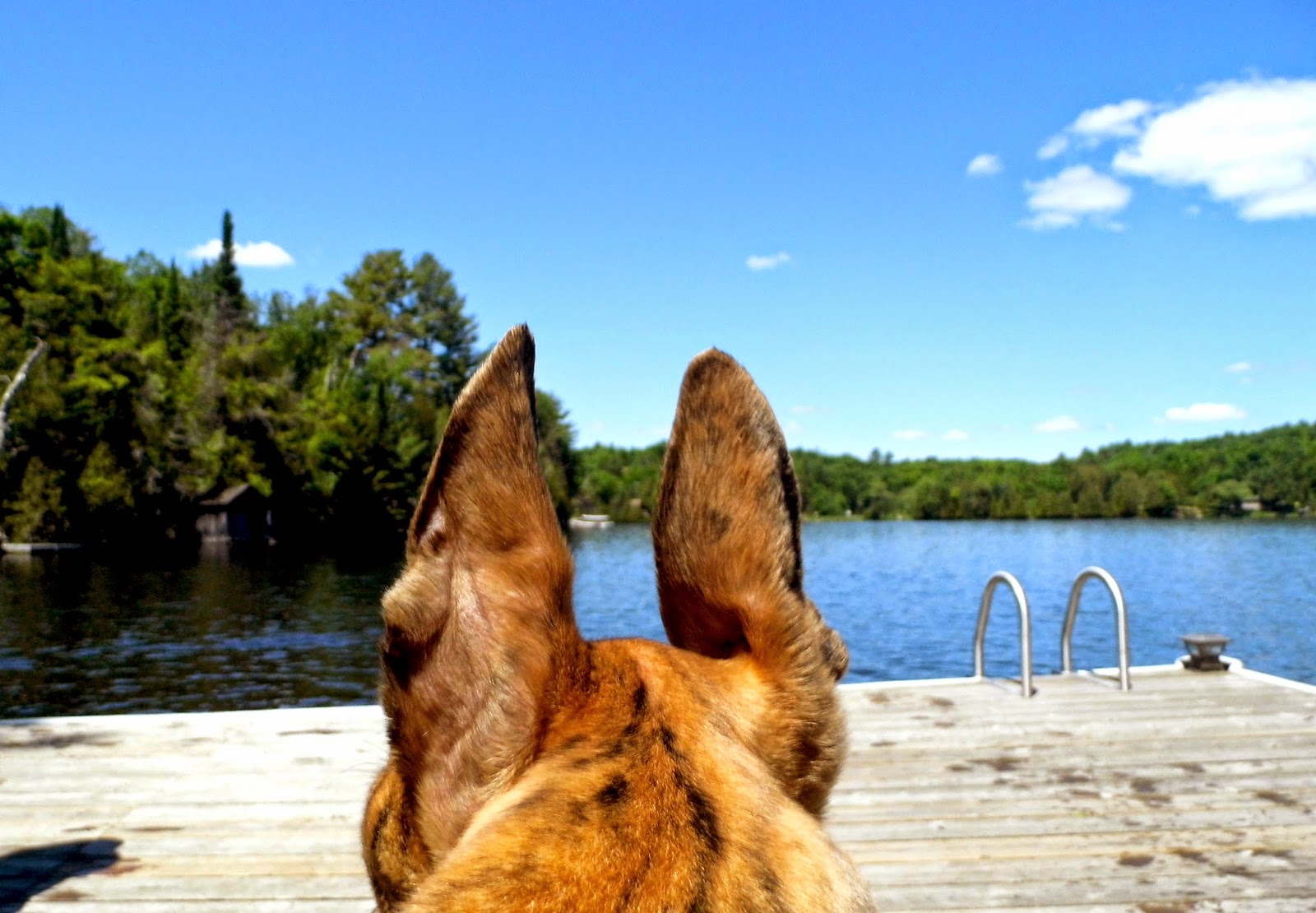 And so we began a series of difficult conversations.  Were we insane?  Would we have time for another dog?  How much would he cost?  What would people think?  In the end, we knew we had already decided to keep him.  He belonged with our family and we decided that when life throws us another family member (even four-legged) we shouldn't turn it away.

I expected to feel regret after making it official and I waited for the sinking feeling to come... but all I felt was relief!  Relief that Barkley had finally found a brother and relief that we hadn't let him go to another family.  Already, I feel even more safe and secure in a house with two big dogs.  I now have a cuddly dog who has already snuggled me during some of my worst blue days as I've faced pregnancy depression.

We also got in touch with his kennel mom and learned that she had a little girl who would crawl into Cheetah's crate as a toddler.  Even on walks, we can tell he loves children so now Barkley will also have someone to teach him how to behave around the weird bald puppy with a funny bark who's coming this December.  We couldn't be happier with this turn of events!

Here are some shots of Cheetah in our (unapologetically) overgrown backyard. 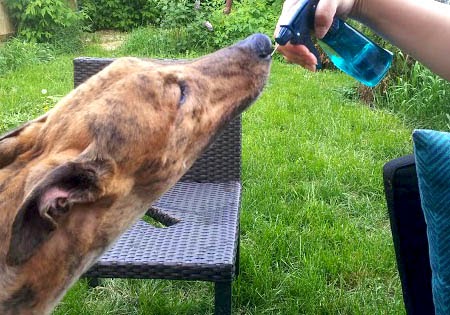 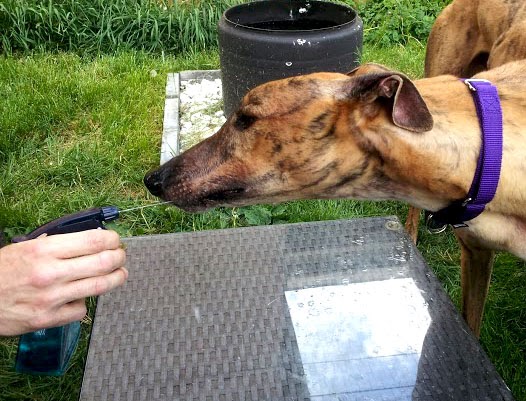 And here he is sitting, which is very unusual for a greyhound due to their muscular anatomy.  See how surprised Corey is! 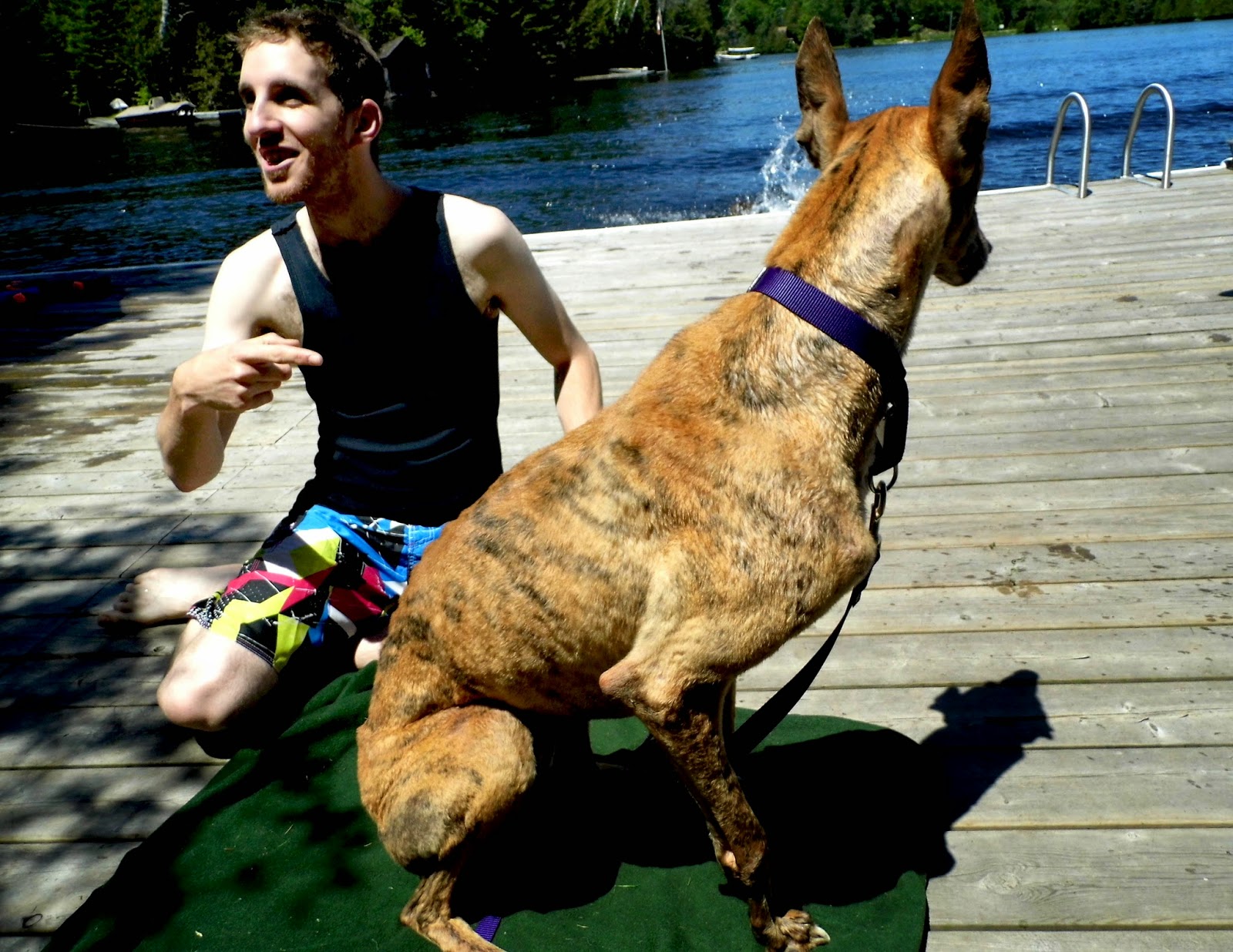 Mostly, he likes to curl up on the bed or couch with as many pillows as possible.  I woke up today to dog breath in my face because he is happiest when he's sleeping very close to me. 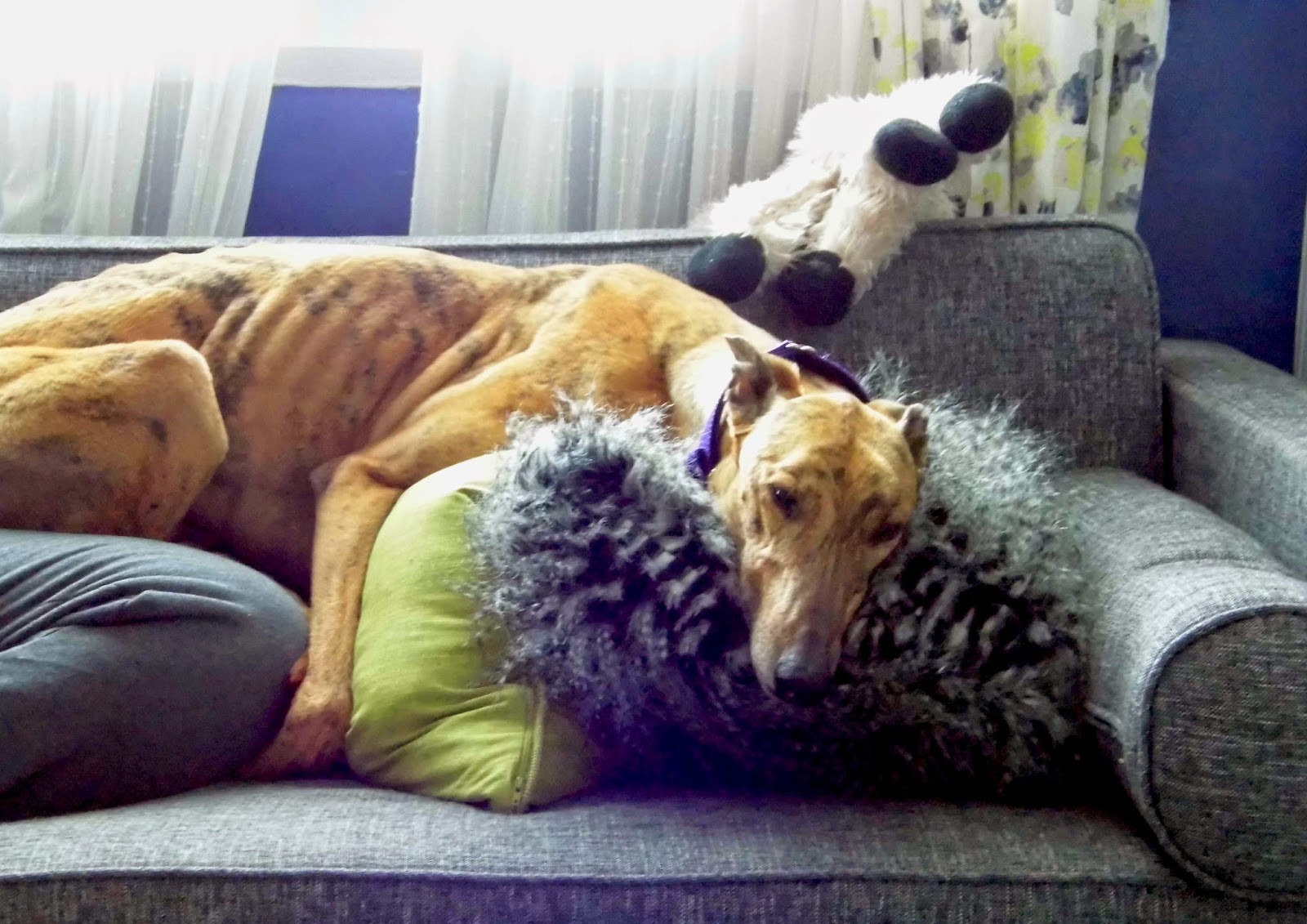 I learned that his (human) kennel mom is currently pregnant and we wonder if that's why he bonded with me right away.  It's like he smelled me and said, Oh, I know what to do with you!  You'll need lots of love, so I'll cuddle you all the time! 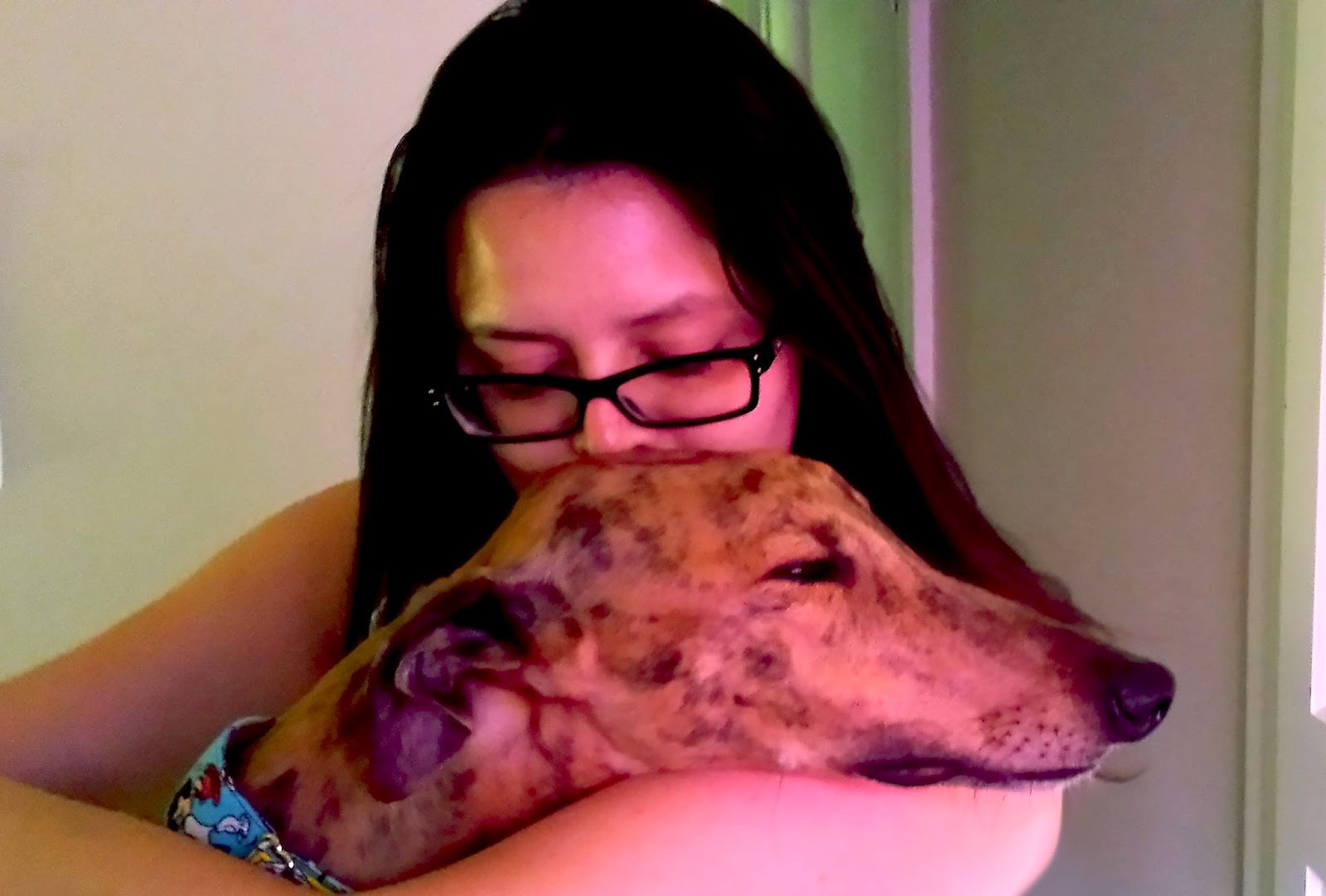