Guys, we're back from holiday and you'll be relieved to know that Corey and I survived our first holiday as a family of four!

I won't lie- we got off to a rough start. We missed our first flight (by a couple of minutes) and we had to go home for several hours before departing about 12 hours later than expected. The airport was rough (sooo much luggage for the girls as well as a stroller and two car seats) and by the time we boarded the plane, I wanted to cry. I really think that anyone who is brave enough to fly with a child or baby alone is a ninja parent. That being said, the rest of the trip was quite lovely. I'll share some highlights and photos with you if you're curious. 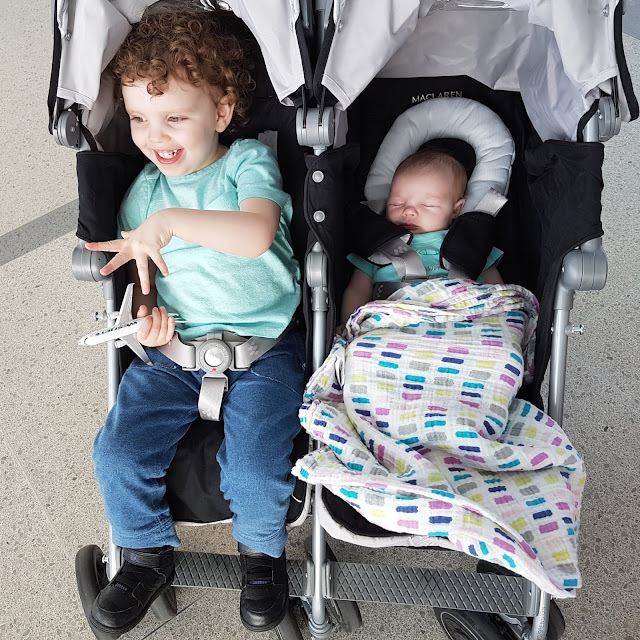 So this vacation almost didn't happen. We only booked it 5 or 6 days before we left because we weren't sure if we could handle a trip this soon after Maude's birth. I was terribly worried a trip would be more stress than it was worth. In the end, we decided to go and we chose Atlantic Canada because it's laid back and we know the people there are so nice so we wouldn't feel judged if both girls decided to have meltdowns during dinner... which happened once, by the way. It turned out to be the perfect choice for us! We're also eager to explore more of our own beautiful country and I really enjoyed teaching Rudy about the places we visited. We bought Rudy this atlas and before bed, we'd point out where we drove and which sights we saw.

We actually flew into Moncton, NB and visited friends who have a hobby farm just north of there. Rudy was in heaven running through their house and "visiting" all the cats and dogs (there seemed to be a different cat in each room of their gorgeous old farmhouse) and they let her feed their chickens and pet their sheep and alpacas. After such a challenging start to the trip, it was lovely to just let Rudy roam free while our friends fed us and took care of us so we could just relax and visit. Rudy was so happy and comfortable there- I think the country life really suits her! 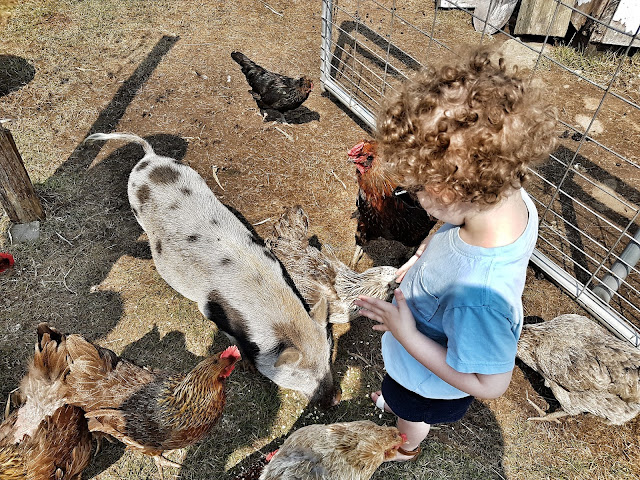 While in New Brunswick, we also visited the Hopewell Rocks. Rudy was so sure-footed, jumping from rock to rock over puddles. I was just proud to have completed the hike while wearing Maude. 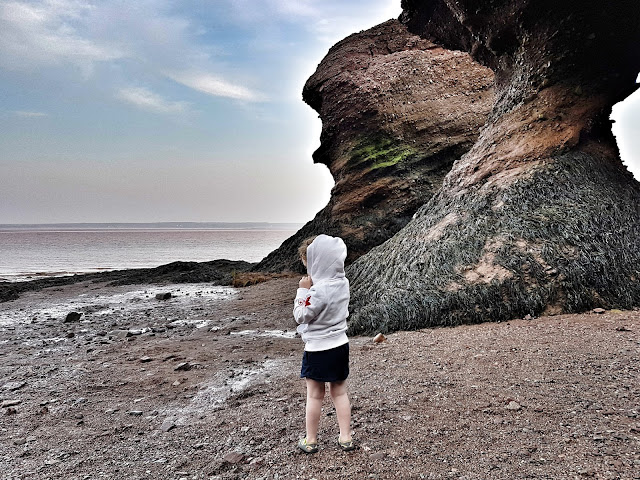 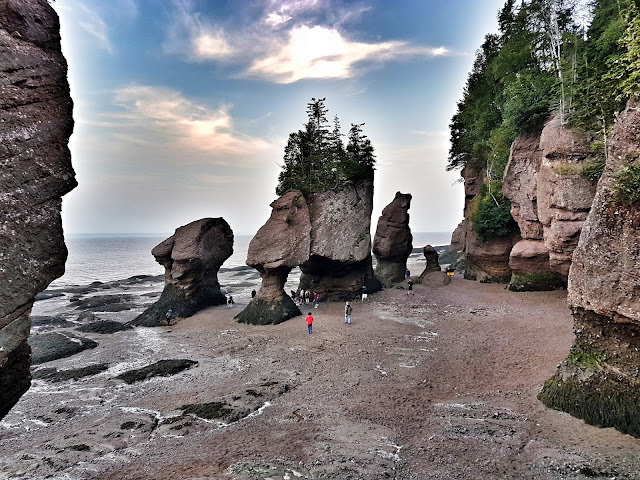 After a couple of days in Moncton, we drove into P.E.I. via the Confederation Bridge. Rudy was excited to cross the bridge we had been pointing out in her atlas and to see her first lighthouse. We stayed in a cottage near Cavendish as our home base but we planned day trips all over the island. The scenery was just as beautiful as I had hoped. 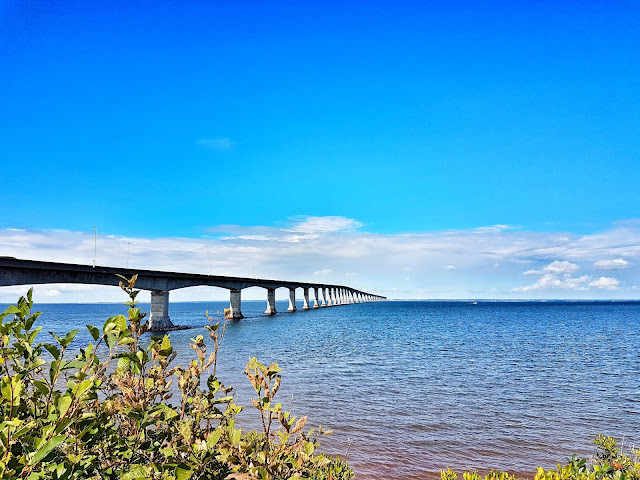 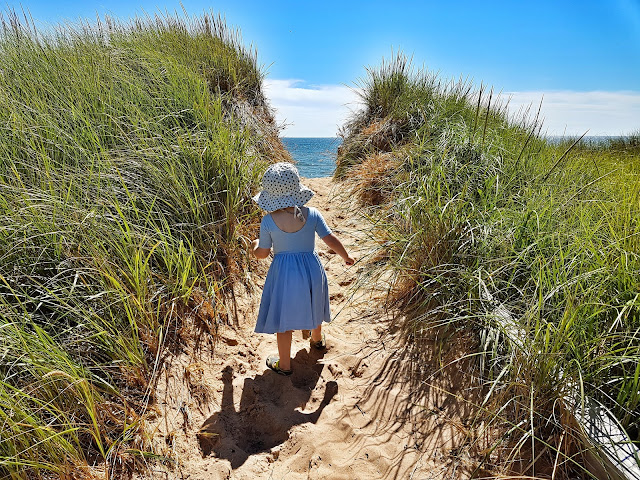 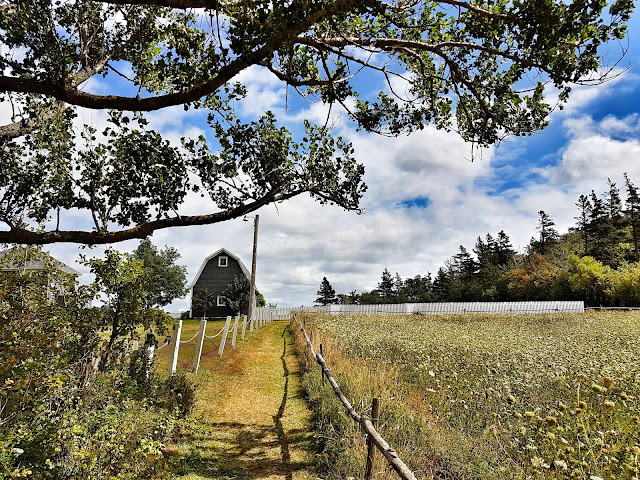 Our trip had so many highlights. I loved collecting sea glass in Souris and visiting the Sea Glass Shanty there. It was a tiny shop but the owner was so sweet and made a necklace for Rudy with some sea glass we had found. 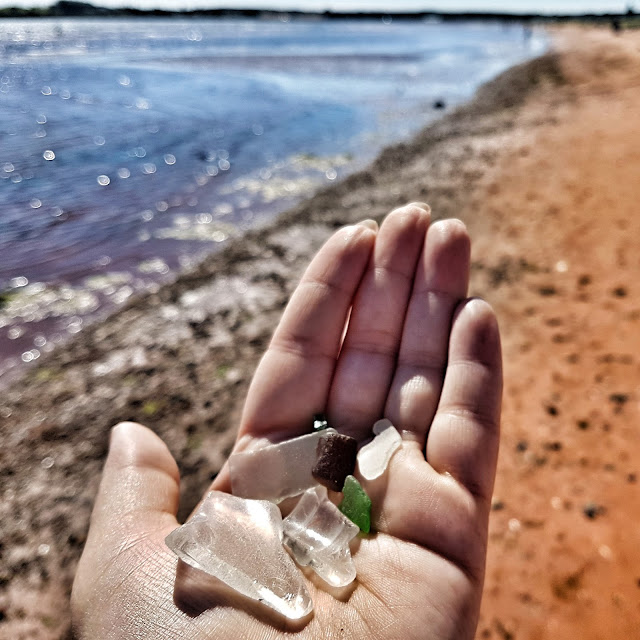 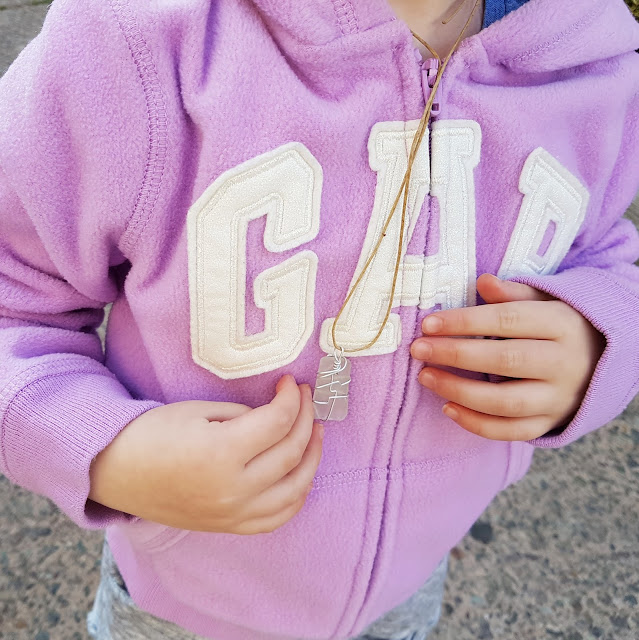 We also found the most charming toy store called The Toy Factory. They have the most incredible selection of toys (really well curated) and they're all out and unboxed for the kids to play with. We visited twice and spent hours there both times. Rudy got to make her own wooden car the first time and the second time, the owners (who are really lovely people) followed us out of the shop to give Rudy a little wooden toy she had been playing with. When you visit, don't forget to visit the bunnies in the front or the enchanting fairy garden behind the playground in the back. 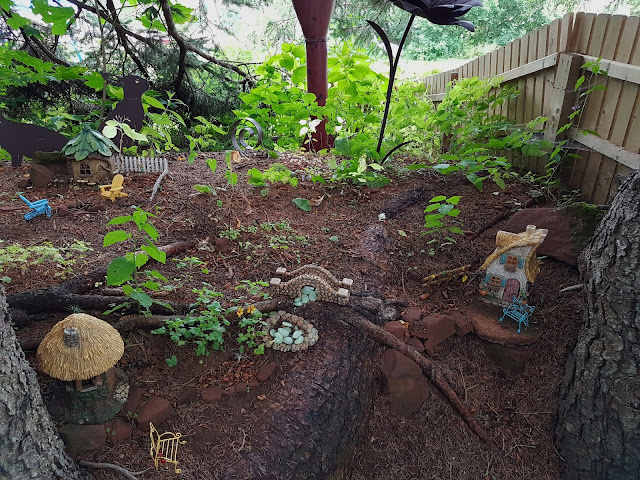 We did some typical tourist things like visiting Cows for ice cream, visiting the Butterfly House, eating our weight in lobster and, of course, Green Gables. I probably love Anne of Green Gables more than an adult woman should admit to, so seeing some of the places described in the books nearly brought tears to my eyes. 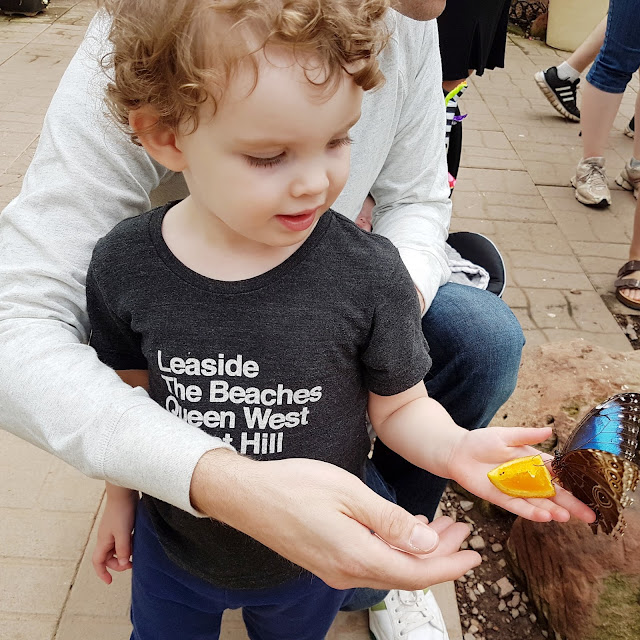 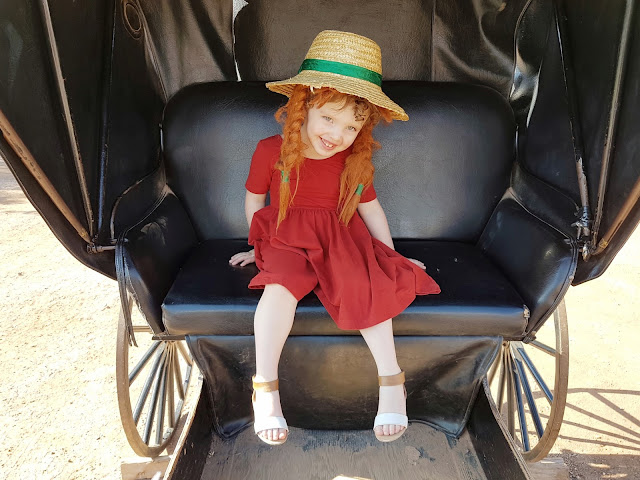 We were about 20 minutes away from Brackley Beach and we went there several evenings because it was so serene and pretty. It's so rare for a beautiful beach to be nearly deserted and we really enjoyed the solitude. P.E.I. sunsets are even more spectacular set against the sand dunes. 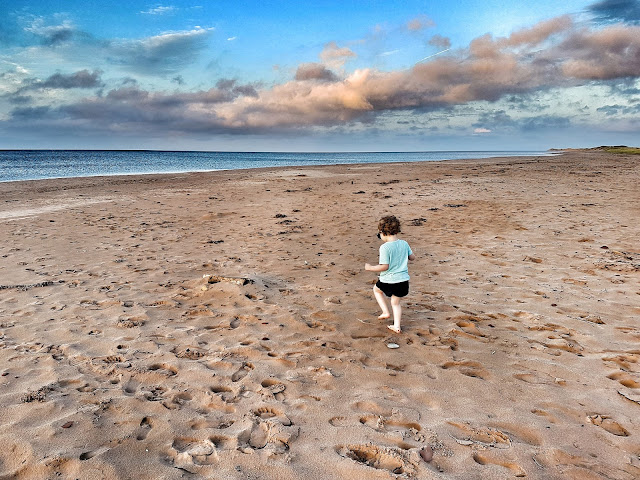 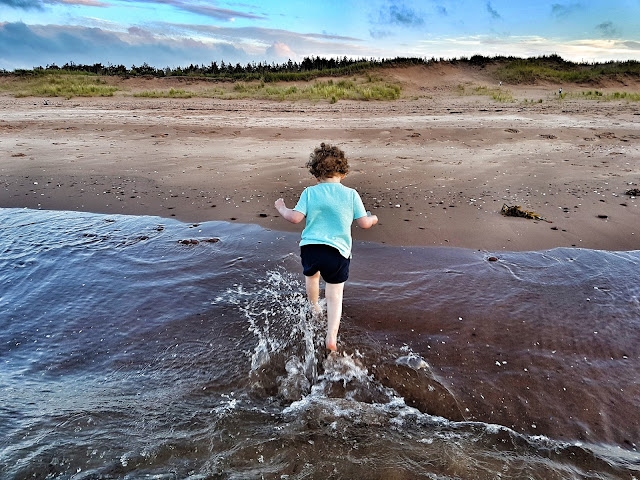 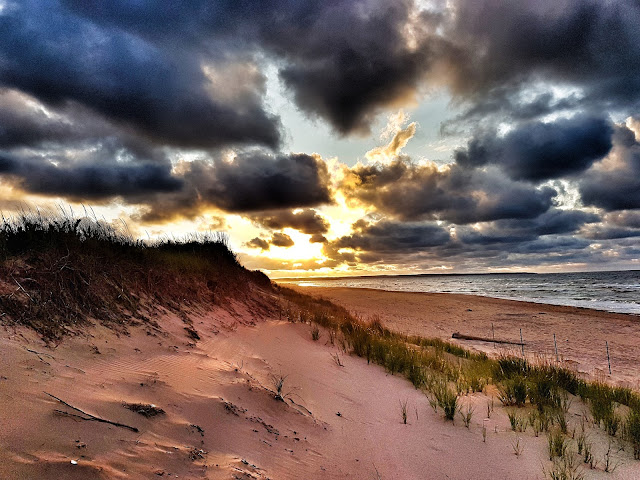 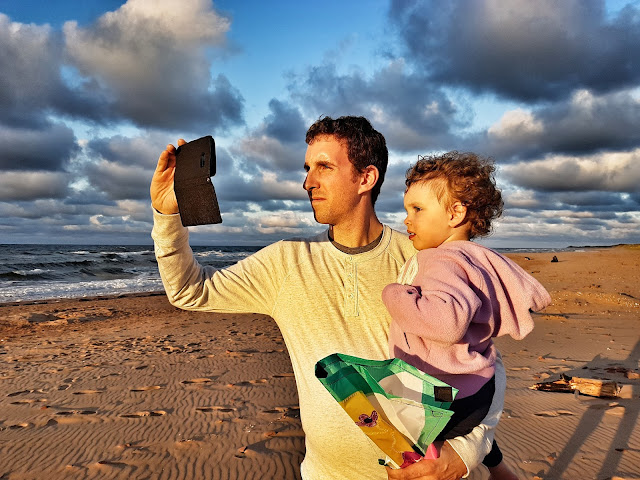 Let's not forget to mention the people. The people on the island were so friendly and warm that we felt right at home. At first, we couldn't understand why they made such a fuss about Maude (strangers kept asking if we could come over or if we could turn her head so they could see her face) and it seemed a little familiar to Torontonians like us. Then we caught on to the fact that in a small population of less than 150,000 people on the entire island, newborn babies aren't as commonplace as they are in the city. People were genuinely excited about Maude because they don't see a dozen babies every day like we do. In Toronto when people stop me to comment on Maude, it's usually to suggest that we're doing something wrong "She's too cold. She needs to be covered" "She looks hot. Should you take off that hat?" "Should her neck be at that angle in her car seat?" but in P.E.I. it was more "Was she born on the island?" "How are YOU feeling?" "Good for you for being out and about!" -Now don't get me wrong, I love Toronto and Toronto people (who are mostly well-intentioned) but P.E.I. was a breath of fresh air.

But more than the sea glass, the beaches or even Green Gables, I loved giving Rudy the type of carefree holiday that reminds me of my own childhood. Rudy thrived on being off-schedule and just exploring in the outdoors and bumming around. She picked wildflowers, collected rocks and sea shells, ate junk food (We let her drink sooo much "chocky milk" at restaurants!) and jumped on the bed. We let her stay up late every night and one night we let her stay up until the sky was completely dark so we could look at the stars. Another night, we went to the beach for sunset and brought a kite to fly. 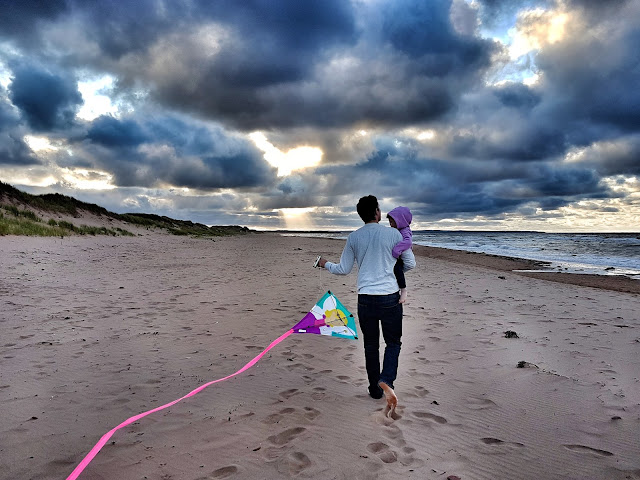 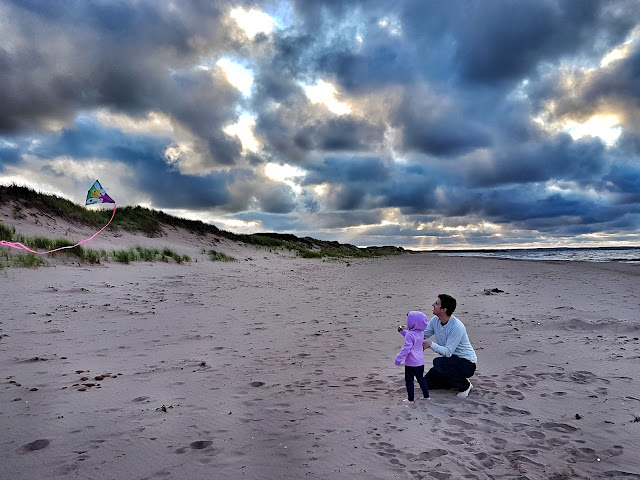 We had a lot of fun and made some of our first memories as a family of four. It was magical. 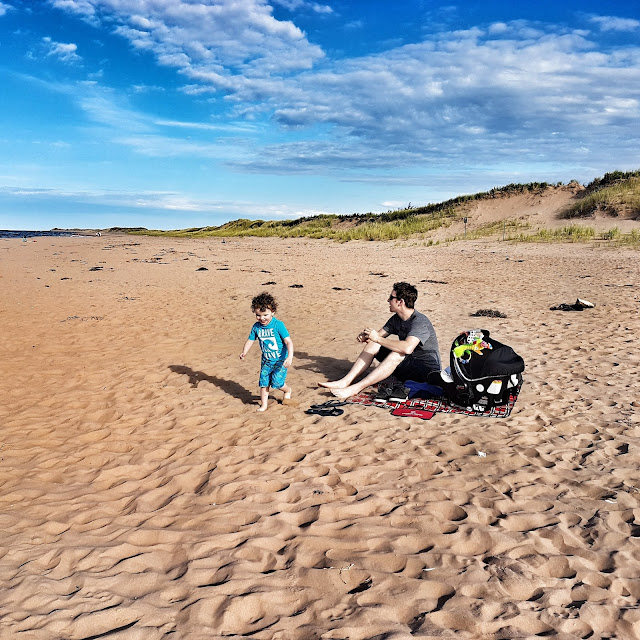 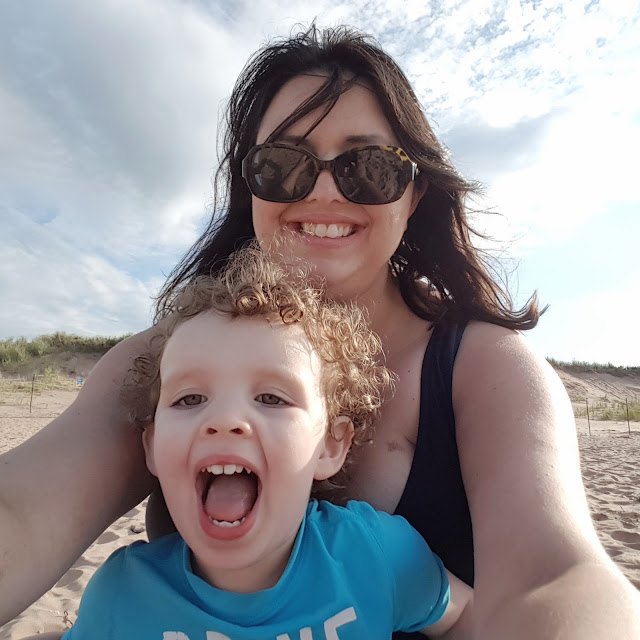