Let's Get Real: The Truth Behind My Instagram Posts 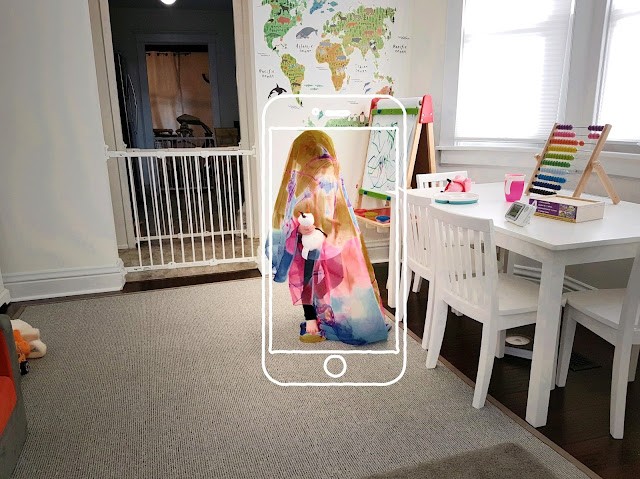 Let's get real: Life with a toddler and an infant is raw and messy and exhausting. However, my Instagram page may tell a different story. There's been a push lately to raise awareness to the fact that social media distorts reality and can make us feel inadequate.

Browsing through my Instagram feed, I'm often in awe of people's picturesque vacation photos, angelic looking children, HGTV worthy homes and expertly plated home-cooked meals. How does everyone find the time? How does everyone find the money?? I realize that I am also guilty of showcasing an airbrushed version of our lives online. I crop out the mess, lighten the photo and for every photo I post, I discard several others. Nobody wants to see runny noses or dishes on the counter so I don't post them. I think for most of us, it's not an intention to deceive but rather to only remember the happy picturesque moments that's really behind our posts. Isn't it only natural to want to focus on the very best times?

The danger is that we sometimes forget that everyone is doing the same thing. With this in mind and drawing inspiration from a very honest blog post: It Ain't All Rainbows And Matching Pajamas: The Truth Behind One Mon's Facebook Posts, I'd like to share our own reality behind the photos. Here are some of my recent Instagram posts with explanations of what's actually happening behind the scenes:

Instagram Post: Before and after photos of Maude's nursery are up on the blog. Link in profile 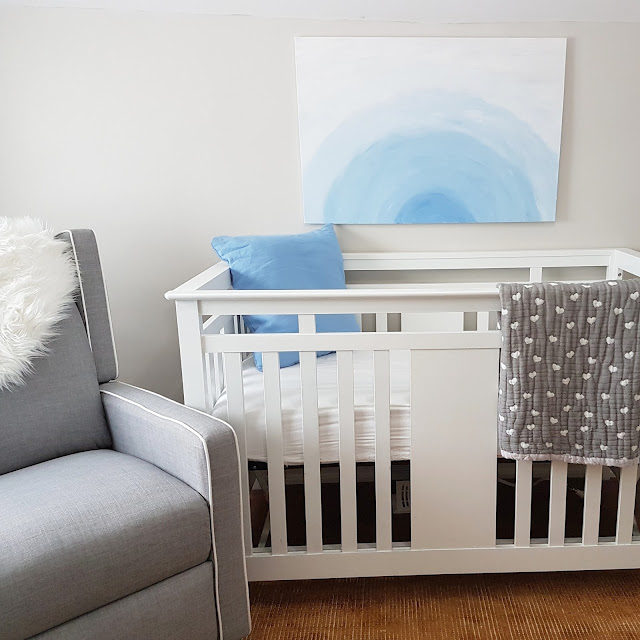 Reality:  When I took this photo, Maude was a newborn and Corey and I hadn't slept in days. The nursery was supposed to be finished before she was born but preeclampsia complications resulted in an early c-section and my hormones made my disappointment at not being "ready" for Maude even worse. I only took a few weeks off from work and we wanted me to be able to enjoy Maude in a serene space so Corey and I (Corey especially) worked really hard the week after she was born to get this room in order. 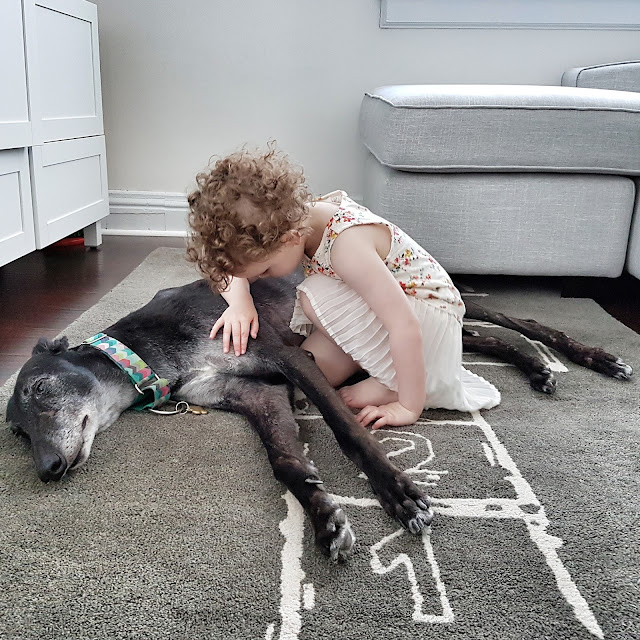 Reality: I took this photo minutes after Maude's newborn photo shoot ended. Rudy had been an uncooperative two-year-old and I was feeling totally deflated since I feared that our photographer hadn't had the opportunity to capture a single good shot. It had literally been hours of tantrums and bribery while I tried to keep my hormonal body from sweating through my dress. I saw Rudy being so sweet and gentle with Barkley and I was determined to capture one good shot that day. In the end, my photographer captured many beautiful moments that morning but I didn't realize that at the time. 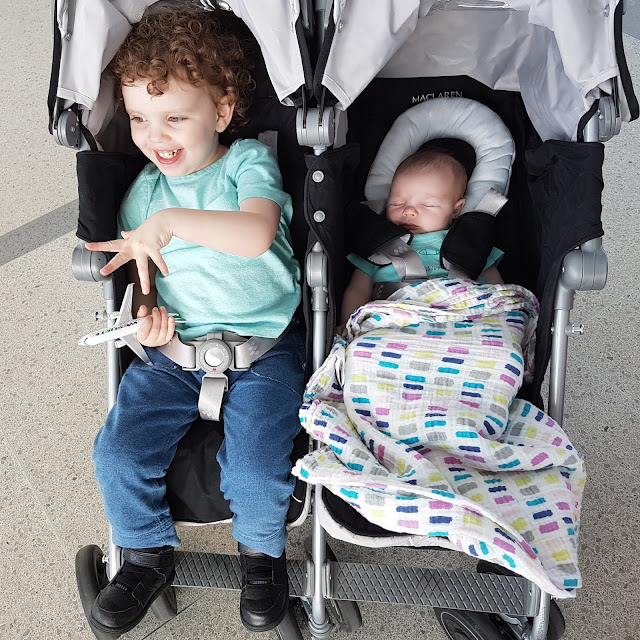 Reality: We were trying to kill time at the airport because we had arrived way too early and then found that our flight was delayed. We arrived so early because we were determined not to miss our flight like we had that morning. If you look closely, you can see that Rudy's airplane toy has a broken tail. This happened earlier that morning as we were racing for the gate and Rudy fell out of the stroller because I had neglected to strap her back in after security.


Instagram Post: There was no caption for this photo. I posted it in a group with others from the butterfly house. 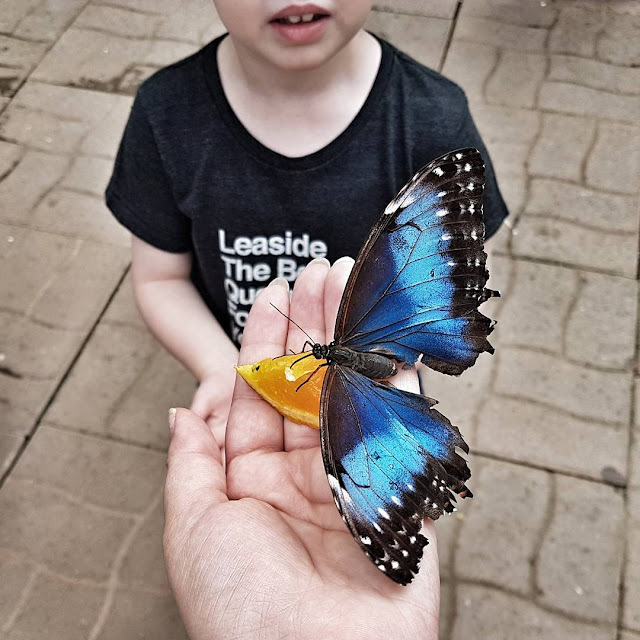 Reality: Rudy loved the butterflies so much that she picked one up and injured it before I could stop her. I explained sternly that she was hurting it's wing as I pried open her fingers so she could let it go. She cried because I made her let it go. I felt terrible for the butterfly.


Instagram Post: There was no caption for this photo either but I posted several of Rudy and Corey on the beach flying her new kite at sunset. 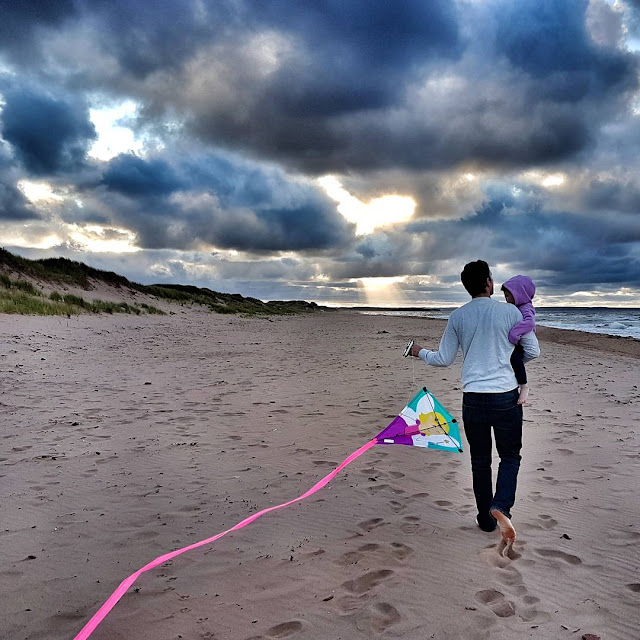 Reality: Our evening beach walks in P.E.I. genuinely were beautiful moments but they were carefully planned around meal times and nap times and we often had to wait in the car for half an hour when we got there so Maude could eat. It was a beautiful but exhausting vacation and having two young kids while away made me feel like a plate spinning circus act where as soon as one was having fun or sleeping, the other would need something. Back and forth. 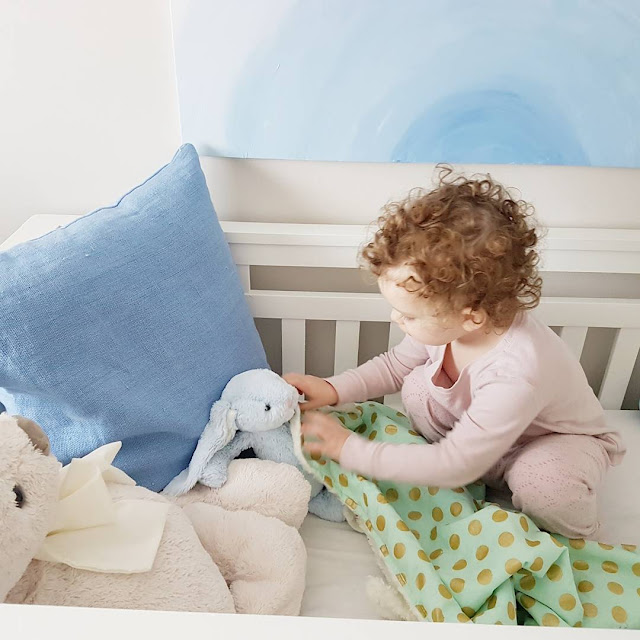 Reality: Seriously guys, how do we keep her out? Now that Rudy can open doors and climb into the crib, I live in fear that she'll either break an arm climbing out of the crib or that she'll crush the baby.


Instagram Post: We had a successful morning of orientation at our new school. School officially starts tomorrow. 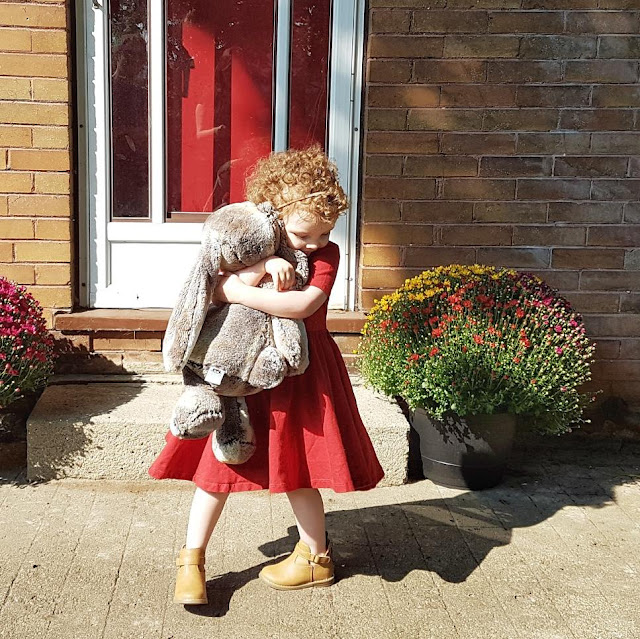 Reality: Rudy has had a successful transition to her new school. I'm so proud of how confident and brave she is! That doesn't mean I wasn't still terribly nervous for her first day. All the kids have to be toilet trained at her new school so naturally I was terrified she'd have several accidents the first day and they'd kick her out. (That didn't happen, by the way.) I was also nervous that the kids wouldn't be kind to her or the teachers wouldn't see how special she is and would be put off by the fact that she doesn't always listen. You know... regular parent fears! 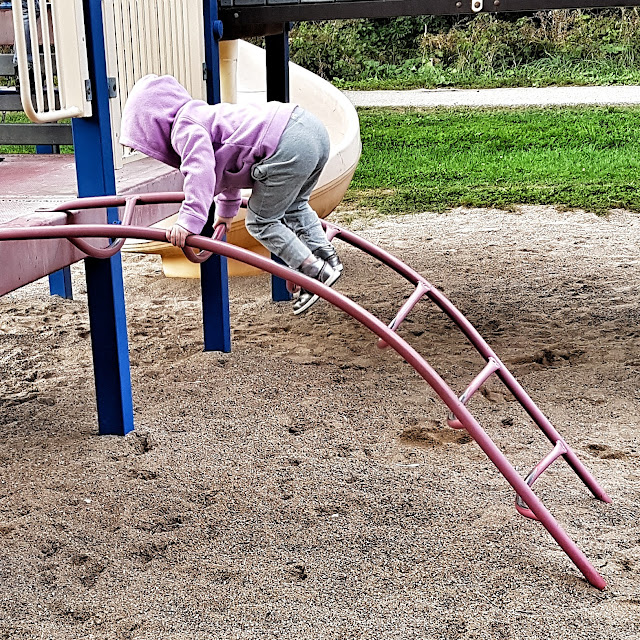 Reality: Go Rudy indeed! We spend a lot of time working on things like listening, following instructions and vocabulary because Rudy takes a little longer to learn those things. Sometimes it's no big deal but sometimes it can make new activities challenging. But there are many other skills that Rudy's learned even faster than her peers. We celebrate her strengths and climbing is definitely one of them! 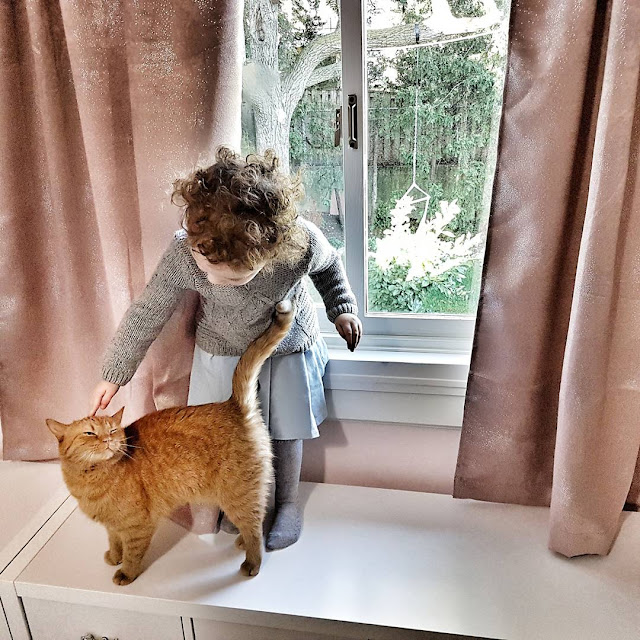 Reality: This was taken the morning of our worst zoo trip ever. Rudy didn't listen, Maude fussed and, while Corey and I genuinely enjoy parenting about 90% of the time, this day fell into the other 10%. At least Rudy and the cat were cute!


Instagram Post: We can't believe our little Maudezilla is two months old already. She's still mostly nocturnal but life with two is starting to seem more manageable. Maude smiles at us occasionally, relaxes in a warm bath, loves being read to and gets excited when we turn on her mobile. She is so loved and gets lots of "high fives" from her big sister. The cat likes to sleep on her crib but he's terrified of her. 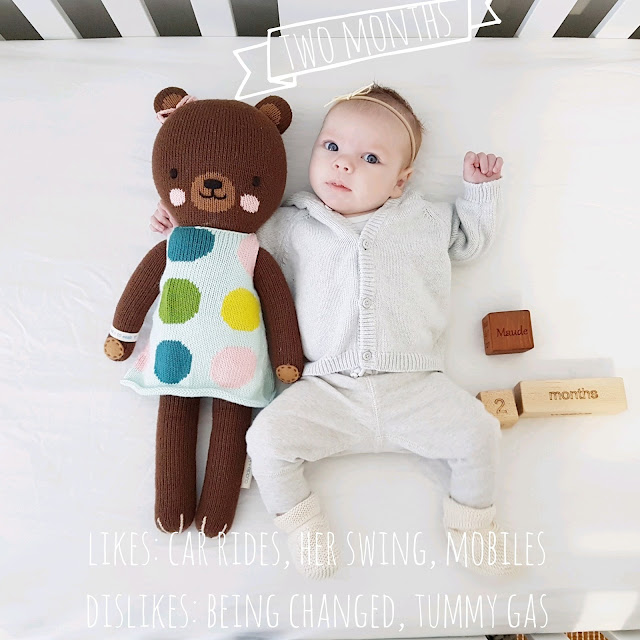 Reality: Maude's first 6 weeks were so hard that we'd already forgotten them. At two months, we were just hoping to finally get some sleep. 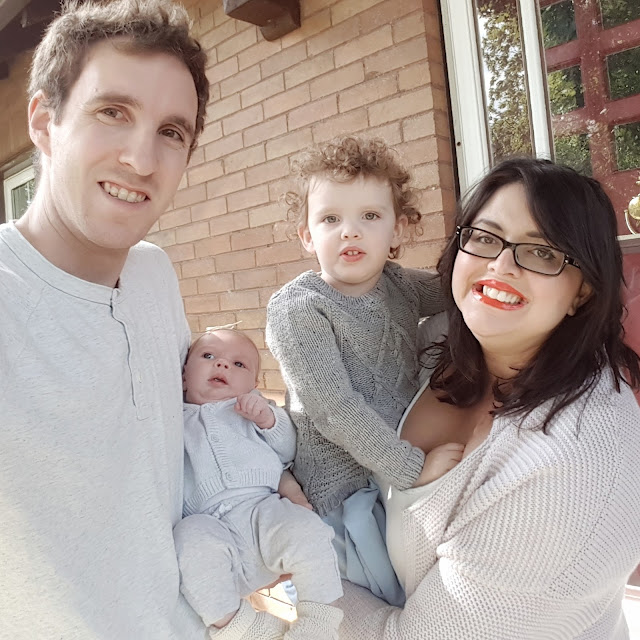 Reality: It pains me to look at my post-pregnancy face and body sometimes and it makes it so hard to pose for photos. Two giant babies, two c-sections and two rounds of gestational diabetes have taken their toll but I am making an effort to respect (if not love) the way I look and pose for photos so that the girls can one day see that my love for them was stronger than my vanity. Still, it's nearly impossible to get four people to smile pretty for a photo when one is a newborn and one is a squirmy toddler. We tried our best. 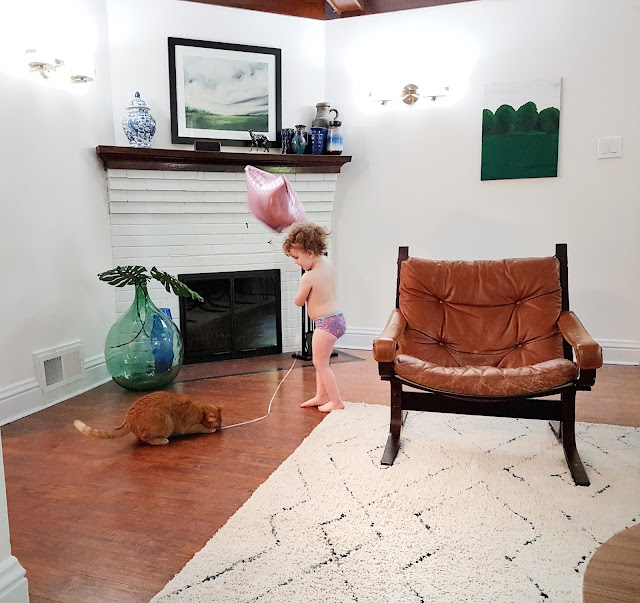 Reality: I received so many compliments on our living room after I posted this photo. What you don't see here is the mess in the dining room or the fact that that rug has been shampooed more often than Rudy (Okay, not quite but almost!) because our senior dog can't always hold his bladder and our white rug is like a giant puppy pad! 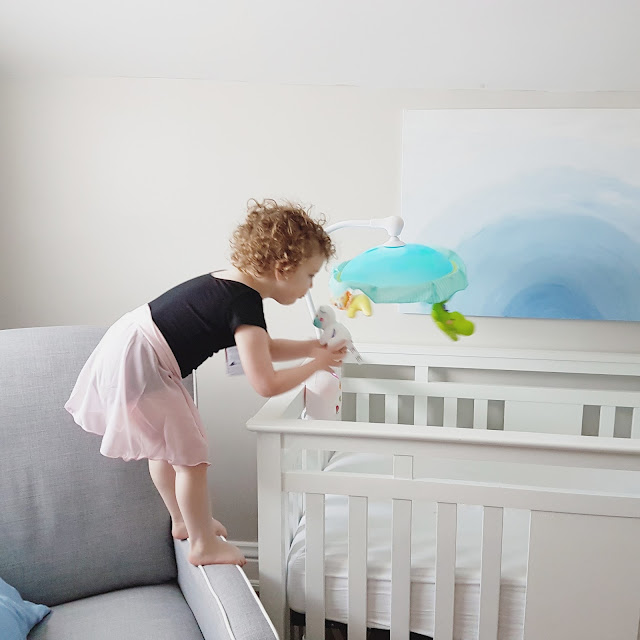 Reality: It scares me every time I see Rudy balancing on the arm of our rocking chair. She gets that balance from Corey! We left the tags on her ballet outfit (She didn't wear it to class but we let her try it on a few times at home) because she was so wild in her first class that we wanted to speak to the teacher before continuing. We love that she marches to the beat of her own drum and likes to make people laugh but raising a child with such a unique personality can be challenging and scary. 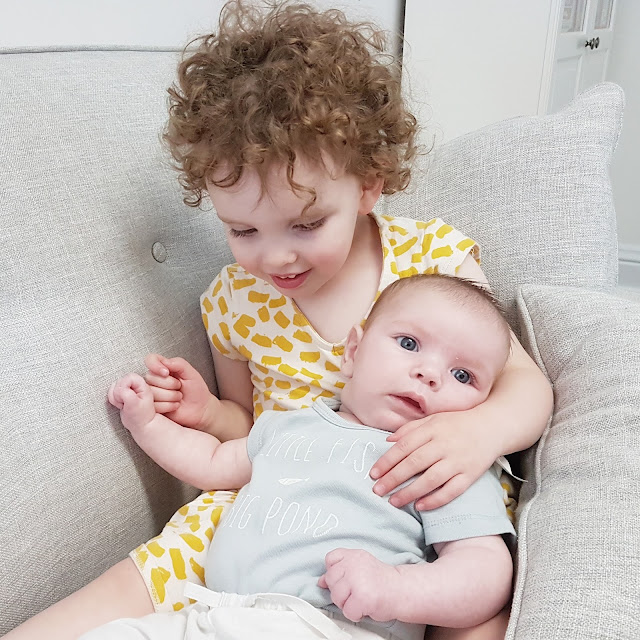 Reality: This picture is probably about as close to perfect as it gets. Sometime a photo really is true to life!

So let's raise a glass to injured butterflies, tantrums, dog pee inside and all the B-List family moments that don't make it to our social media pages.