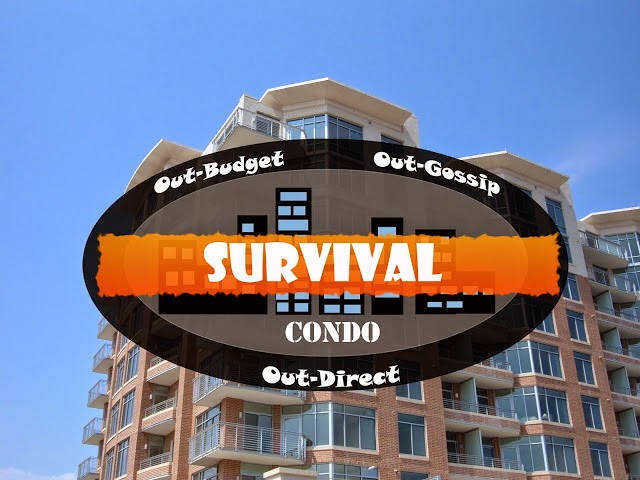 This is the last chapter in my Condo Survival series.  Let's recap for a minute.

Shortly after we moved in, we realized what a mistake our purchase had been.  The property manger used a flood in our unit to try to extort money from us. 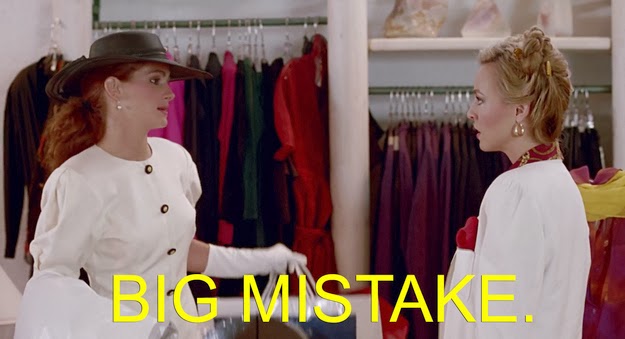 I sought help from my neighbours, but in the end I realized I would have to initiate the change myself.

`
The board was corrupt and consisted of a group of awful, witch-like women.  Their glares made my hair stand on end...

The property manager thought he could charm and bribe me to join his side...

And although I often felt like the only sane person on a mental ward...

I did find a couple of like-minded friends.  Together, we decided to take on the property manager.

Once he caught wind of our mutiny, he tried to honour some of his promises.  It was too little and far too late though.  The damage had been done and we didn't trust him.

The original board members treated me as though I were the evil villain who was ruining their lives.

In the end, we managed to overthrow the property management company and encourage some of the corrupt board members to leave.

It was still an uphill battle to undo some of the damage that had been done, but we managed it.  I met some great people along the way and learned about myself.  Sometimes when I look back on that time, I compare it to being in prison.  That's certainly how it felt.

In fact, the down-to-business property manager we hired to help us turn the building around reminds me of Red from Orange is the New Black.

I wish I had some dramatic scenes to wrap this saga up with a bang... but I don't.  The truth is, after we sold our unit, Alex sold hers.  I remember thinking her buyer was just crazy enough to fit in with the rest of the residents in our building.

Once we had both sold, we resigned from the board to give people who still had a future in our building a chance to make a difference.  We were tired and happy to pass the torch.  There was another meeting with all the residents two days before Corey and I moved.  Alex and I downed a couple of glasses of wine and went.  For old time's sake.  It felt liberating to no longer be sitting at the front of the room, fielding all the crazy questions.  It felt better still to no longer be invested in the outcomes. 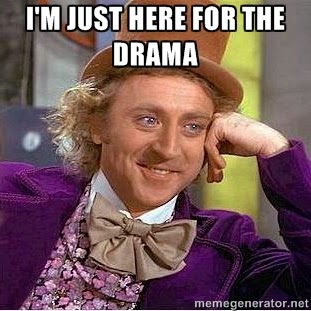 I thought people would attack us for abandoning them but it was strange: it's as if the minute we sold, we became invisible to all the lunatics in the building.  For the first time, we were left alone and it felt so peaceful and almost normal.

And so that's how, my turbulent, dramatic, sometimes frightening time in the condo ended, not with a bang but with a whisper.

Since I left the building, I've lost touch with "Dee Dee" and "Red" but I've stayed in touch with "Alex" and I hope to keep her friendship for a long time.  I returned exactly three times.  Once was to visit Alex before she left and I described looking back at the building from the parking lot and seeing the Kingpin glaring down at us.

The second time was for work.  In the elevator there was a memo from the new Board President claiming that my board and I had reduced the maintenance fees by too much (I knew this was a lie because our hydro numbers confirmed we were very conservative with our initial reduction and it would actually be possible to reduce them again.) and they were going to increase the fees again.

I whipped out the camera on my phone and I felt myself getting upset as thoughts ran through my head.  How dare they lie about me!  What did they plan to do with the extra money?  This sounded dishonest!  Was the building slipping back to the way it had been before?  Was all my work in vain?

I was back for the last time about a week later.  There was a new notice in the elevator, mentioning that they would be hiring a live-in Super.  I know it was a luxury the building couldn't afford and I had petitioned to sell the unit in order to pay for new elevators and perhaps conversion to gas heat or a proper security system.  Obviously people in the building felt a false sense of security was more important. 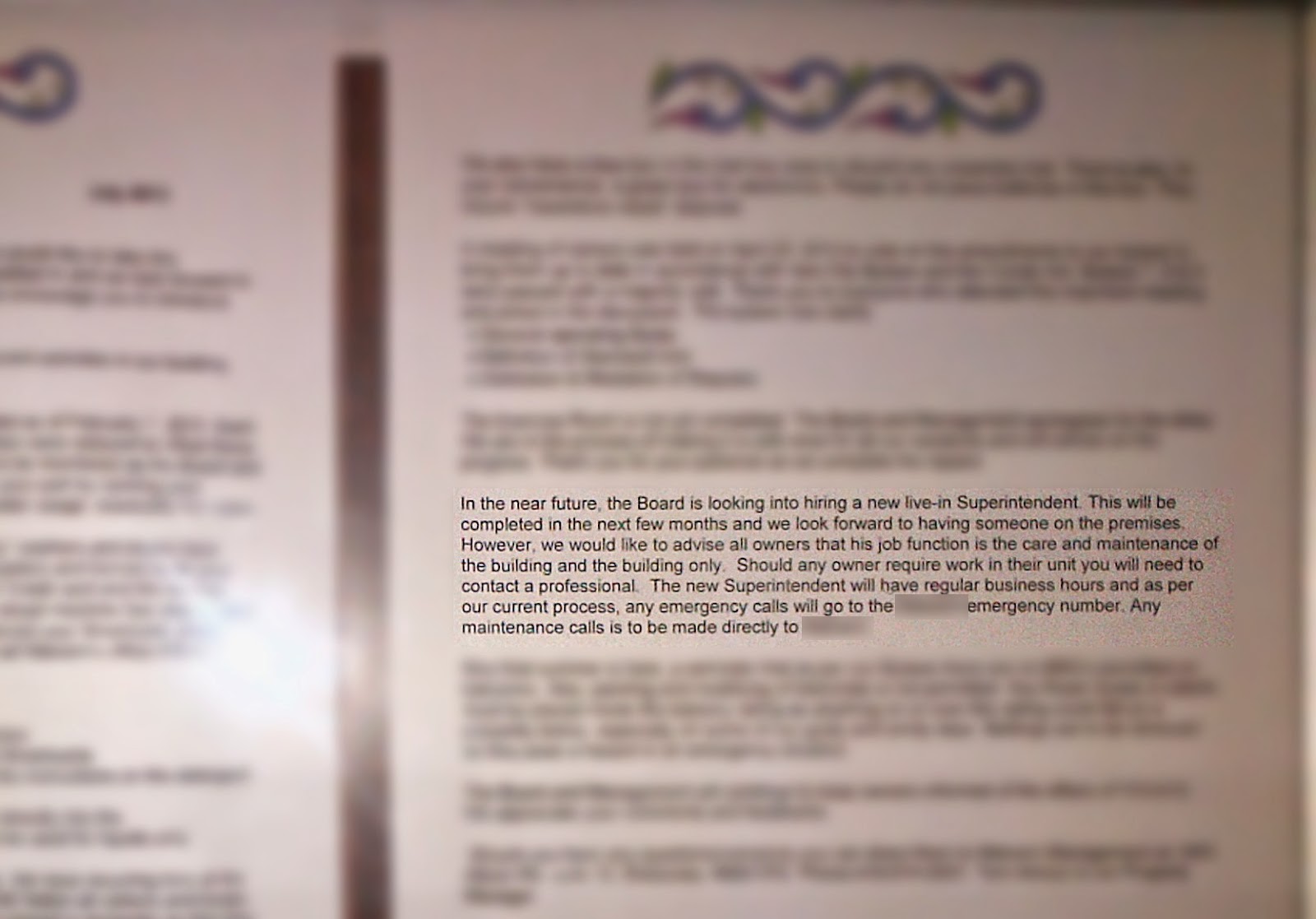 My hard work really had been forgotten.  I was surprised that I didn't care.

Now, when I look back on my time in the condo, it feels like it was part of someone else's life or maybe like a story that I read a long time ago.  I know the stories seem funny, but at the time they were very traumatic.  My time there has probably changed me forever, and I am trying to make it count through advice I give to my clients and the work I do through the Toronto Real Estate Board's Government Relations Committee to push for Condo Act reform.  I hope that one day other people in similar situations will have a better recourse than I did at the time.  It's also important to remember that, while my condo was bad, there are many good ones out there too.  We did our research before buying but now that I know some of the tactics used my an unscrupulous board to hide the financial situation, I believe there are ways to double and triple check before buying.

Writing about my experiences there has been cathartic.  In fact, it's a little bittersweet that this series has come to an end.

Sometimes when I drive past the building, I still shudder a little.  More often, I just call "Alex" because it makes me think of her.  She and I are now friends "on the outside" but our conversations still occasionally travel back to our time in the building.

Perhaps nothing sums up my time there better than a painting given to me by Alex, my good friend and ally.  When we first moved in, we felt victimized and hunted like foxes.  But foxes are also clever and sly and we used those qualities to create a better environment for ourselves and others: One where we would no longer be trapped there.

We both managed to free ourselves but I remember feeling paranoid and guilty about my own sneakiness for a long time after I left.  Luckily, Alex reminded me that I am not the fox and that I never really was.  It was just a mask that I wore while I was there, and now I can cast off the mask and live the rest of my life.

The drama is over and the curtain is closed. 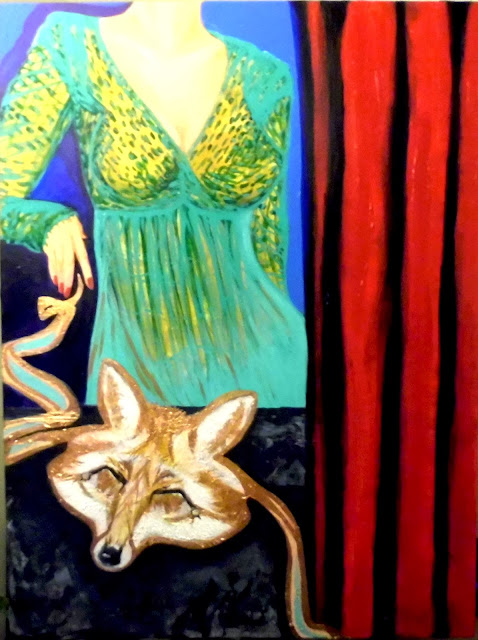