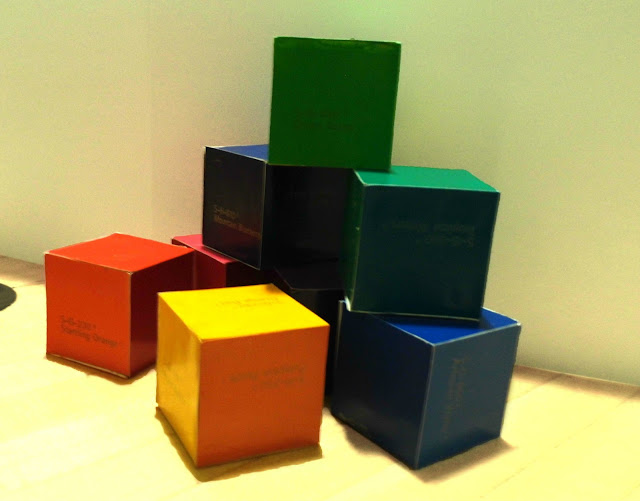 Last weekend, we were unexpectedly forced to stay home one night.  Waiting to hear back from someone, I found myself looking for something fun to do to keep my mind off things.  (On a related note, I may post slightly less frequently over the next couple of weeks since I'm writing my Broker's exam but I hope to make up for it with some exciting news regarding our condo. I'll share our news soon.  Woo hoo!)
Anyway, we were home and I was bored and looking for a non-television related distraction when I remembered that I had wanted to make something for the Pinterest Challenge which is being hosted this week by some talented bloggers: Katie from Bower Power, Megan from The Remodeled Life, Sherry from Young House Love and Michelle from Decor and the Dog.  It's a neat idea: Basically, you're supposed to find something from one of your Pinterest boards and either make it or draw inspiration from it and add your own spin.
Pinterest Challenge Accepted!  I had already purchased supplies, so offer night (okay, the cat's out of the bag... we have sold conditionally!) became a little less stressful and a LOT more colourful!
I've been eyeing this funky Pantone Rubik's Cube, which I pinned to my Good Ideas board ages ago.  You know the thought of moving has me feeling a little paint-colour-crazy so I thought I'd add a fun spin to the idea with Behr paint (which we used to paint the condo) colours. 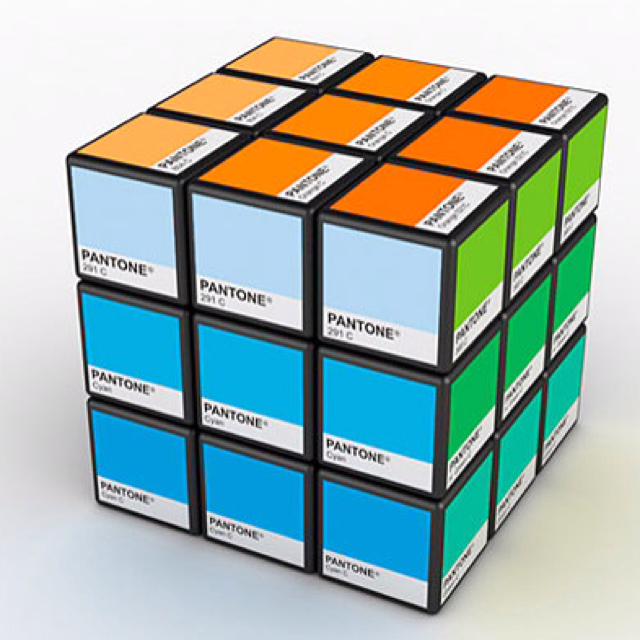 I thought that making blocks would be a fun way to keep several paint chips and still have a cool coffee table sculpture/ fun thing to play with when I'm on the phone.
I started with 8 wooden blocks from the craft store.  I wanted to be able to make a cube (2 X 2 X 2) and I wasn't ambitious enough to try a full 27!  I then went to Home Depot and found paint chips in a rainbow of colours (48 in total) and made sure the paint chips were large enough to each cover a side of the cube.  I felt a little guilty for taking so many paint chips so we bought a couple of other supplies while we were there. 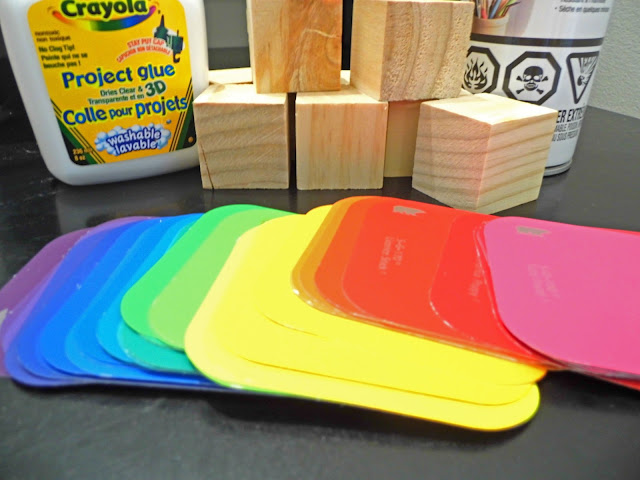 I decided that I wanted the name of the colour to be visible and I also wanted each cube to be made up of different hues of the same colour family rather than a rainbow of different colours.  This made it easy to organize my paint chips.  Had I thought of this at Home Depot, I would have made sure to have collected 6 variations of each colour but the chips I had collected ended up working out fairly well. 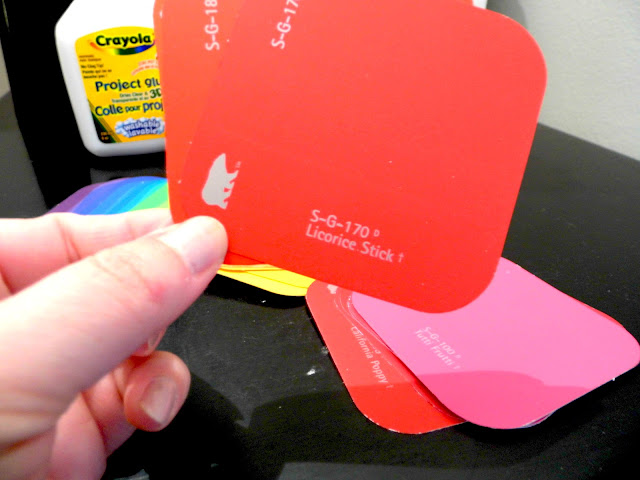 I then traced the block onto the back of each paint chip and cut them out.  I was not a perfectionist but I tried to be reasonably neat. 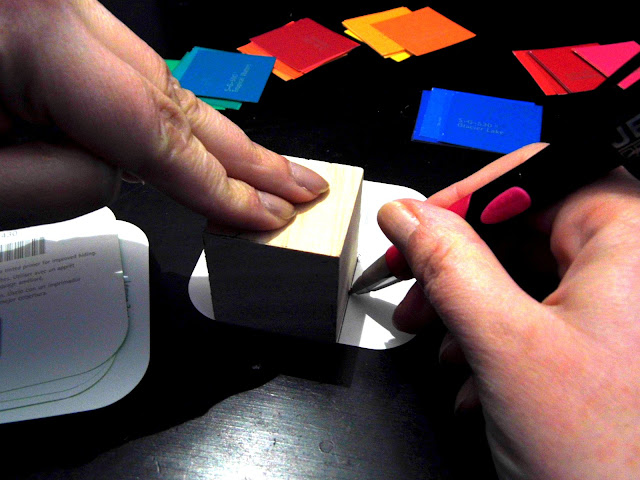 I then used simple white glue to adhere the chips to the blocks.  Looking back, I may have had more luck with a hot glue gun or a faster drying glue.  I did need to go back and smooth the sides again because the white glue took so long to dry. 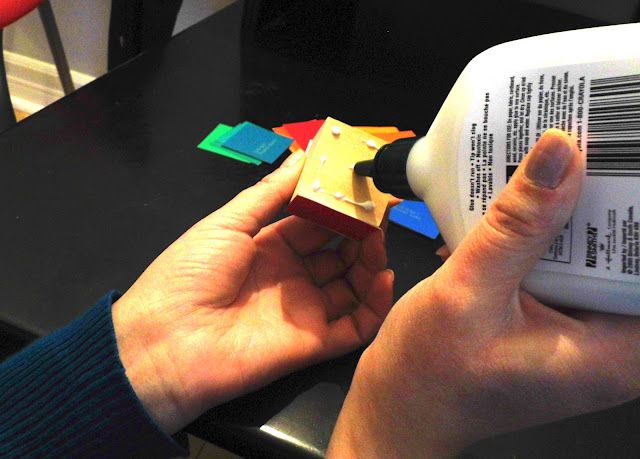 After they were dry, I sprayed them with a clear acrylic spray glaze for some extra gloss and water resistance.  We don't have children and Barkley doesn't try to eat things so I didn't care if it was non-toxic spray.  I think it was but I'm not positive... I did feel a little giddy spraying it in the bathroom, despite the fact that the fan was on.

The final result was a set of fun, unique blocks which I can stack in different patterns to show different colour combinations. 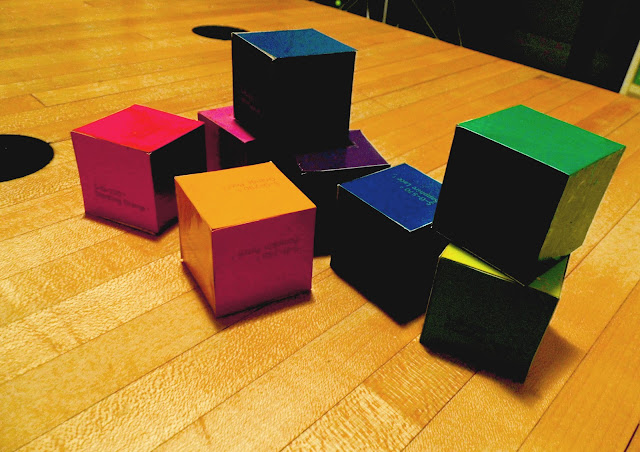 Wouldn't these look fun in our bright living room on the mantle beside our white piggy bank? 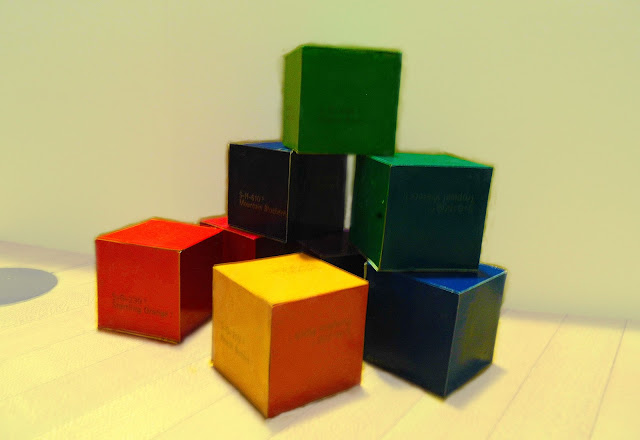 It's not to late to try your own Pinterest Challenge.  In fact, I had so many ideas left over that you may see more in the weeks to come.  What do you think?