Happy Weekend! (And an Update) 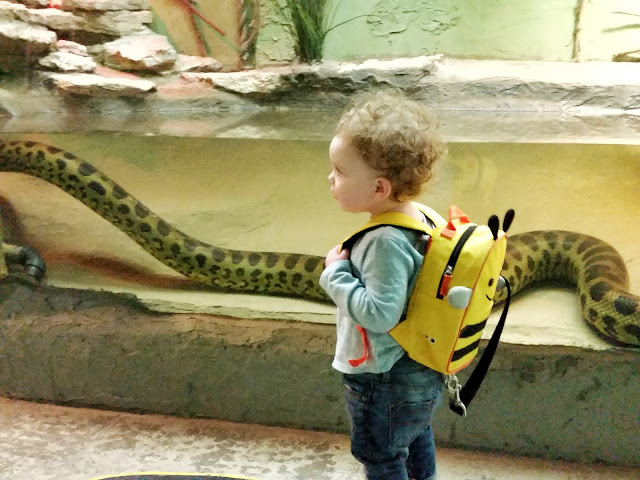 I know this blog has been silent for a while.  It happens every spring when the market gets busy and I find myself working longer hours each day.  I can't promise to post frequently again until the summer but I have several posts which are close to being finished so I'll make a push to publish some over the next little while.

Last Friday I found myself with a solid three hours between meetings.  Corey was also off from work, so we scooped up Rudy from daycare (She is walking now!) and headed to Reptilia!  We ended up having a blast during our little impromptu family date.  Although Rudy LOVED seeing (and even getting to touch) the reptiles, I attribute a lot of her excitement to the fact that we were using her new backpack leash harness.

Before Rudy was born, I had never thought much about toddler leashes but I was vaguely aware that their use was a source of minor controversy in the parenting world.  Here's an article outlining both sides.  And I still see both sides... However I happen to have a toddler who doesn't want to hold my hand or be carried.  Perhaps it's pent up frustration from being a late-ish walker but Rudy now wants to walk everywhere on her own and she often writhes and squirms like an eel when we pick her up.   At her age, she still too young to understand the concept of staying with Mummy and Daddy so while we work on our "Hold Mummy's hand now." and "Don't touch that!" understanding, the harness lets her explore a bit while practicing her walking and remaining safe.  At this age, you can take your eyes off them for a second and they're gone, so the harness also gives us some added security in public places.  Rudy loved it and was so proud to carry her water and sweater in her very own backpack!

While not a substitute for teaching her how to behave and actually supervising her, the leash/harness is a great tool for us.  Looks like I'm on team leash.  Which side are you on?  ;) 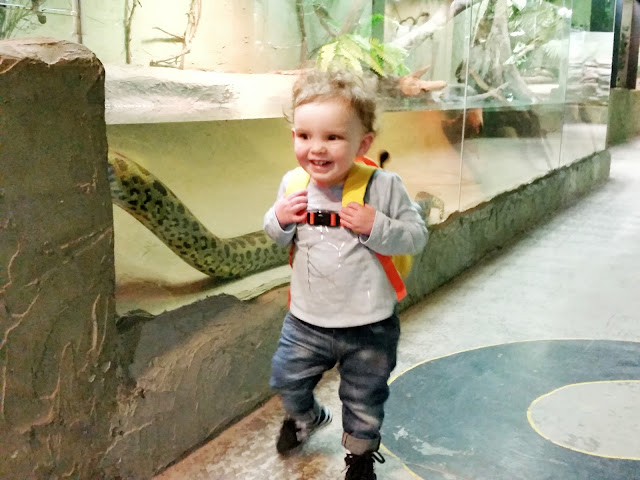 Here are some more links from around the web:

Teaching girls to be brave.

Check out this great mom and her beautiful baby!

This app will solve your baby naming disputes!

A million years ago, I nearly sublet an apartment from this girl.  Now she has a fabulous shoe line and is sort of famous.  I follow her instagram.

A small but pretty kitchen.

Would you try a blueberry pancake flavoured shot?  I'm planning on trying one tonight!

I love these shoes for spring!

A fun tooth fairy idea if you live in a country with small bills... or a wealthy tooth fairy.  If we try this one day, Rudy will have to get American $1 bills... or Canadian $5, depending on which is worth less.  :P

If you've ever lost a pet, get ready for a cry.

I love this backsplash.

The other night we had a craving for fried food, so I made these.  I'm definitely saving the recipe!

This made me laugh.

I don't normally share what I'm reading privately but I feel really compelled to share an essay with you today.  Many of you may have guessed that, as a blogger, I also follow other bloggers.  I have a few favourite blogs that inspire and entertain me and A Cup of Jo (written by Joanna Goddard) is often open in a background tab on my computer for light reading on breaks.  Over the past year, I have followed closely as Joanna's brother in law passed away from cancer and her family both mourned his loss and remembered him.  His name was Paul Kalinithi and he was a Stanford neurosurgeon and a new father to a baby girl who was not yet one at the time of his death.  As his final days approached, he penned essays, which are both profound and frank in their exploration of a young father's final days.  Before pursuing medicine, Paul considered writing and his essays almost read like poetry.

Becoming a parent has strengthened me in many ways and shown me levels of bravery and compassion within myself that I wouldn't have believed I possessed.  Thinking of Rudy's future makes me weep for the world and at the same time, vow to do my part to make it a better, more fair place for her and her children.

When I hear of other families facing tragedy, their pain cuts me more sharply than before and I can imagine Paul coming to terms with the end of his life and the realization that he would never get to share so many of the things he had dreamed of with his wife and daughter.  His book is next on my reading list, but for now I'll share with you one particular passage from one of his essays, that resonated with me as beautiful and honest and devastating:


"Yet one thing cannot be robbed of her futurity: my daughter, Cady. I hope I’ll live long enough that she has some memory of me. Words have a longevity I do not. I had thought I could leave her a series of letters — but what would they really say? I don’t know what this girl will be like when she is 15; I don’t even know if she’ll take to the nickname we’ve given her. There is perhaps only one thing to say to this infant, who is all future, overlapping briefly with me, whose life, barring the improbable, is all but past.
That message is simple: When you come to one of the many moments in life when you must give an account of yourself, provide a ledger of what you have been, and done, and meant to the world, do not, I pray, discount that you filled a dying man’s days with a sated joy, a joy unknown to me in all my prior years, a joy that does not hunger for more and more, but rests, satisfied. In this time, right now, that is an enormous thing."
- Paul Kalanithi (from his essay, Before I go)
Posted by Taylor de Sa at 6:32 am