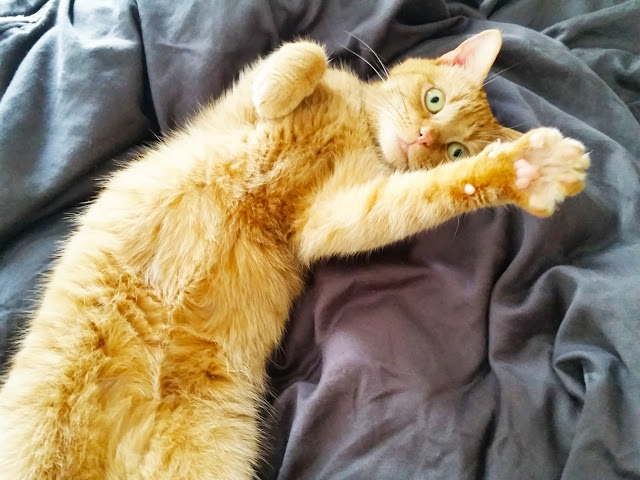 Are we crazy?  The short answer is an unequivocal yes!  You may have noticed that our family sort of thrives when there's a lot on our plate!  I think we're happiest with busy schedules and a crazy house with lots of activity.  We had finally found a routine with the dogs and Rudy and I suppose our house felt too calm and occasionally even (dare I say it??) quiet.  You know in movies when everything is quiet and yet you can still hear crickets chirping?  Well, that's just what we needed: a Cricket!

This chapter of our story began a month and a half ago when we found ourselves hosting an unexpected visitor on a snowy night.  It was so strange to have a cat in the house, but it felt very natural and we started thinking about adopting a kitty of our own.

Our main challenge was to find one who would not be afraid of the dogs and would still be gentle enough to play with Rudy.  We needed a bruiser with cuddly side!  We spoke with several rescue organizations about our lifestyle, home and our challenges and concerns about introducing a cat to our dogs.  Our biggest concern was Barkley, who tends to get a little too excited about cats and we worried that if the cat ran from him, it would encourage him to chase it.  We outlined our plan for introductions, which included a slow transition and humane muzzles on the dogs and we met some wonderful volunteers at five different organizations who set out to help us find the purrfect match!

Another challenge we had was the fact that this was such a huge decision for our family and we had to make sure we were choosing the right kitty for the dogs AND Rudy.  Some of the larger shelters can be competitive, as we discovered while we were discussing a particular cat and a young woman approached his cage and spent about ten seconds there before leaving.  We were later told that she rushed to the application area telling them that she wanted to apply to adopt a cat right away because there was another couple thinking of adopting him.  Great for her but for us, we couldn't rush to adopt a cat based on ten seconds of observation.

We explained to the organizations we spoke with that colour, gender and age were of little consequence if we could find the right personality.  We were also willing to wait weeks or months in order to find the right cat.  After all, this cat will likely be with us when Rudy moves out so we wanted to make sure we found a good match!

Then, I noticed a young barn cat online.  He was being cared for by the Alliston & District Humane Society, which is run by an amazing group of volunteers.  Corey and I read a little about him and learned that he had been a barn cat and had been catching rabbits to survive.  A local farmer had brought him in to keep the poor bunnies safe.  It sounds like a story from a Beatrix Potter book and I kept thinking that a weathered barn cat would definitely know how to keep the dogs in line.  The last line of his description answered our other question.  It read "He would love some kids to play with."

I emailed them immediately and was directed to their Cat Team Lead, Marilyn.  I told her our story and she seemed to think we might be a great home for Cumin, which was his name in the shelter.  I explained that we weren't local and I had a hectic work week and couldn't just drop everything in order to visit (Clients come before cat adoptions!) and I breathed a sigh of relief when she offered to hold him for us until our appointment later that week.  Even when I had to reschedule once, she was understanding and respectful.

When we finally visited, we met with Peggy.  She was wonderfully helpful and gave us privacy and lots of time to make up our minds.  We spent over an hour petting him and holding him and trying to figure out if he'd be happy in a house with big dogs who like to sniff cats more than cats liked to be sniffed.  At one point, I got cold feet and Corey and I asked if we could take a short drive and discuss it.  Peggy was amazing and didn't pressure us at all.  She did remind us that if it didn't work out, we could just bring him back and I felt as though they wouldn't make us feel like bad people because they sincerely just wanted to find the best home for this little guy!

We ended up coming back for him! 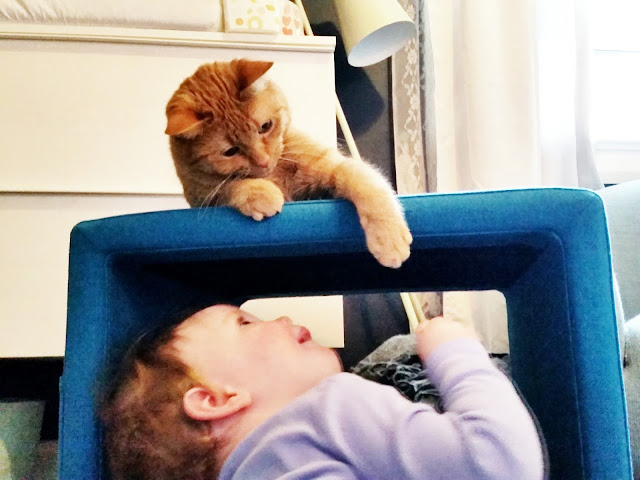 It took us a week to introduce him to the dogs and by then they were both sort of accustomed to his smell in the house and they accepted that he lived here.  Then, it was another week of only short, muzzled interactions and then another week of unmuzzled but supervised interactions.  One thing that impressed us about Cricket is that he didn't run from the dogs.  He would stand his ground and even let them sniff him.  If he hissed or swatted at a dog and they took a step backwards, he would take a step forward.  Cricket is the new Alpha!

Finally, we began letting Cricket explore more of the house at his own pace.  He claimed the top floor as his a while ago but today, he decided that downstairs would be his as well and now he walks around like he owns the place.

The vet estimates that he's about Rudy's age, which means they'll grow up together.  The two got along famously from the start and he loves hanging out in her room.  Rudy strokes him very gently and he'll even show her his tummy!

Cricket and Cheetah will also become close, I think.  They'll already sleep side by side.  Barkley may take a little longer to settle down but Cricket is totally relaxed around him and Barkley is much calmer than he was in the beginning.

Cricket has a cute little chirp, which is how he initially got his name.  He's a total cuddler and loves being held on his back.  He's also very playful and has a wicked left hook.  When we walk down the stairs, we'll often get swatted by a little orange paw through the banister!

We are finally finished adding to our family... for a couple of years at least!  Here are some photos of our newest family member from my Instagram account: 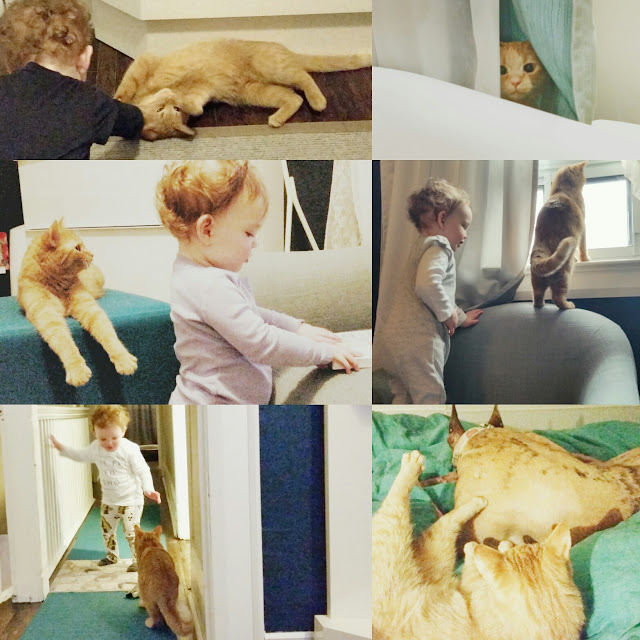 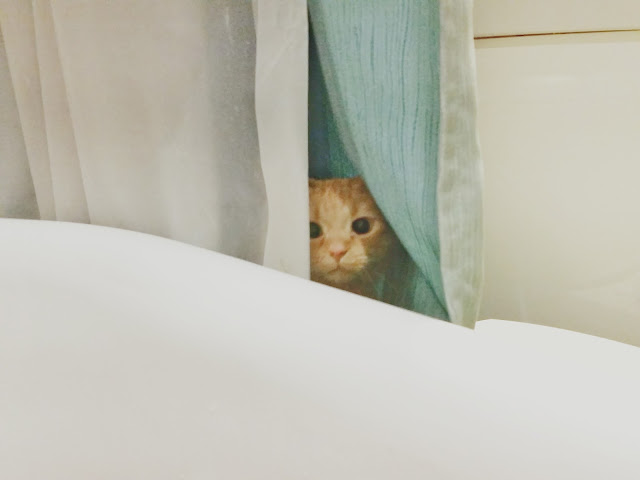 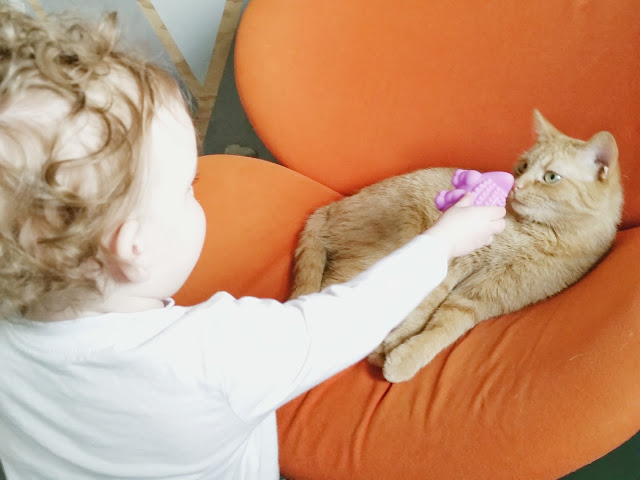 I'd like to extend a special thanks to Marilyn, Peggy and the entire team at the Alliston & District Humane Society!  They really do wonderful work and have made our adoption of Cricket possible!
Posted by Taylor de Sa at 10:26 pm