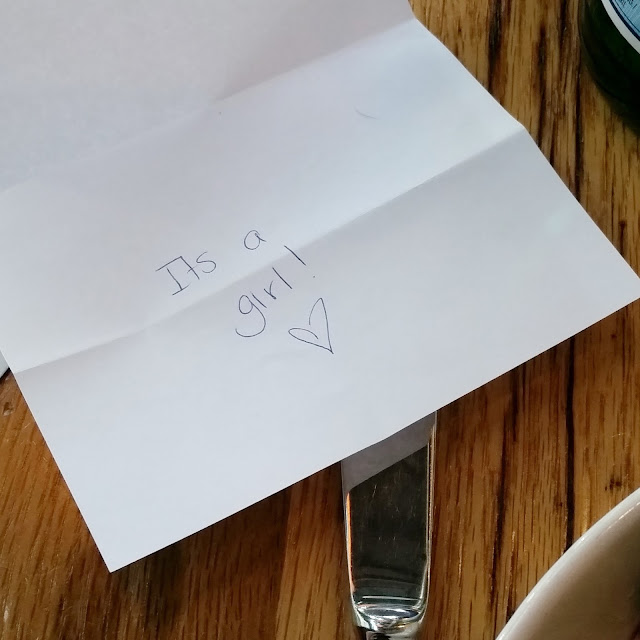 Yes, I know it's been ages since I posted but we've had some big news brewing... I'm pregnant with a little sister for Rudy and between chasing an energetic toddler around the house, renovating the new house, the busy spring market and CRAZY pregnancy nausea that lasted until a few weeks ago, there hasn't been much much time or energy left over at the end of the day for blogging.  Forgive me and I promise lots of cute baby photos in the future along with another nursery "before and after" post!

We announced our happy news to family and friends on Facebook and Instagram yesterday and so many people shared kind words and advice that we were overwhelmed.  I also chose a particularly busy day of work to announce it, so I had no time to respond to anyone until after I got home at 10 or 11.  I felt awful each time my phone rang and I had to say "Thank you... but I can't chat now" and so I thought I'd also answer the most popular questions people have been asking us.  Here goes:

Our immediate families knew from pretty early on but most people actually didn't know.  In the past few weeks, my stomach has started to resemble a basketball and it's beyond the point of just looking like I ate too much at a sushi buffet so I've also been sharing the news with people who have seen me recently.  So immediate family, friends who've seen me recently as well as active clients and colleagues of mine have known for a little while.


How far along are you?

I'm about half way to the finish line.  Which is how I look at it.  Those of you who know me, recall that I don't love being pregnant.  The end result is pretty awesome though.  :)  The baby will be here in the second half of July, which was no accident- My work slows considerably then and it will mean about a month of guilt-free recovery and bonding time for me and baby before my work starts to get active again.


What's the deal with the photo?

Last time, our gender reveal was anything but low-key.  We found out along with all our wedding guests as we opened a giant box filled with pink balloons.  It was amazing, but we wanted something more private the second time around.  This time, we had the ultrasound technician write down the gender for us and we carried it around in a sealed envelope until we worked up the courage to open it one day over lunch.  I cried... happy and surprised tears.


Is that why you moved?

Haha!  We weren't pregnant when we bought this house but we were definitely hoping to need a little more space.  We've been referring to the third upstairs bedroom as the nursery since the day we made an offer on this house so yes, that is certainly a part of the reason we moved.  We actually learned for sure that I was pregnant with this baby the day we got the keys to this house!  It felt like fate!


Why did you wait so long to tell people?

Like a lot of women, I had some struggles getting to this point in a pregnancy.  Corey and I are incredibly lucky to be able to get pregnant quite easily (first try each time and once by accident!) but I had some trouble staying pregnant.  I ended up miscarrying very early on three times in the past year so it took us a while to really feel confident about Baby M.  All three early miscarriages happened in such a short time and it was frustrating and emotionally challenging and I think we needed some time to accept that this time it was really going to happen for us.

Add to that the fact that my first trimester tends to be my toughest, and we really just wanted to power through my worst weeks without having to talk about pregnancy with anyone.  Now that I'm feeling better, we're happy to share our news!


Are you excited for maternity leave?

So many of you have asked- especially those of you due around the same time.  Like last time, I'll be going back to work pretty quickly and Corey will be doing the REAL work by staying home with baby for the first year.  Corey will be happy to have lots of play dates and I'll join in if I'm free!

HAHAHA!  Let's just say that Corey doesn't envy me and I don't envy him.  I love a new baby but I'd never be able to stay home.  It's hard and lonely and... WOW babies poop and sleep a lot!  No thanks!  The baby is coming during my slowest time of year (when I'd likely take family holidays anyway) and colleagues will help my clients in my absence so I can take some time to bond with baby.  Once the fall market hits, I'll be back to work though and probably eager to get out of the house.  Don't feel sorry for us though- Just the way it's so hard for a lot of women to imagine how it's not sad for me to go back to work, it's nearly impossible for me to understand how someone would be excited for a year at home with a baby.  The thought terrifies me but (luckily) Corey's man enough to handle the challenge!

Oh my goodness, she is SO excited!  Our goal was to get her excited about the concept of a baby so that she'd actually want one long before we told her.  We've been reading this book to her (she requests it several times each night and recites some of it by heart) and here's why it's so brilliant: It's all about a new baby coming home but the baby's actually a secondary character in the book and it's really all about how great the big sister is and all the cool things she does with the baby!  We always stress the part where it says "And as baby grows, we'll play together" and we remind her that babies don't stay babies and they actually grow into friends to play with.  She gets really excited about that!

Since a week is like a year in toddler time (I'm not sure of the exact conversion but that must be close) we had planned not to tell her until I was heading to the hospital but (apparently) kids aren't THAT dumb and when she started patting my belly and saying "baby" we figured she knew something was up.

When we finally told her that she was going to be a big sister, she got so excited (like, pre-teen backstage at a Justin Bieber concert excited!) and was jumping up and down on her bed and shrieking with excitement.  We hope she feels that way when the baby actually arrives.


What does M stand for?

We're not sharing her name yet.  Like with Rudy, we had both a boy and a girl name chosen before we learned the gender.  It made it feel more special because we were finding out WHO it was and not just WHAT it was.  We are keeping her name in the family for a while still (maybe until she's born) but it's another strong name (like Gertrude) and probably another name that some of you will love but will make other people question our sanity.  We love it though!


Have you finished the nursery?

Oh, we're so close to finishing!  Actually, our baby announcement was almost our nursery reveal. (We were going to pretend it was a guest room and then show you all in a blog post that it was actually a nursery!)  Like with Rudy's room, we chose everything before knowing the gender so it works for both a boy or a girl.  It's very different from Rudy's old nursery but we love it and can't wait to show you!  We're waiting on a rug (which we've ordered) and a coat of paint!


Did you have a gender preference?

I had always wanted a boy and a girl.  That's always how I pictured my ideal family.  And yet, when I learned I was pregnant I was desperate for another messy, loud girl running around the house, climbing the furniture and trying to put baseball caps on the dogs!  Still, I had really thought we were having a boy but I was struggling to picture a boy and told Corey I was worried because I could only imagine a baby girl.  I hesitated so much before opening the note because, while I have no real gender preference (I love cuddly little boys too!) the picture of a baby boy was still so fuzzy in my imagination, whereas I could clearly picture another girl.  Corey says that when I saw the note, relief washed over my face and I couldn't stop crying.  I think I was really hoping it would be Baby M!  I'm really excited to help raise another strong woman!


How are you feeling?

Some of you who know I hate pregnancy have been kind enough to ask.  I'm actually feeling okay.  I still hate pregnancy but I feel lucky to be pregnant and excited for M!  It's true what they say that you're so busy the second time around that you actually forget that you're pregnant!  It's also a lot easier for me to forget now that my nausea is under control.  ;)


So there's our big news!  We're thrilled to share it and I'll be posting more about our house but also about our lives in the weeks to come!