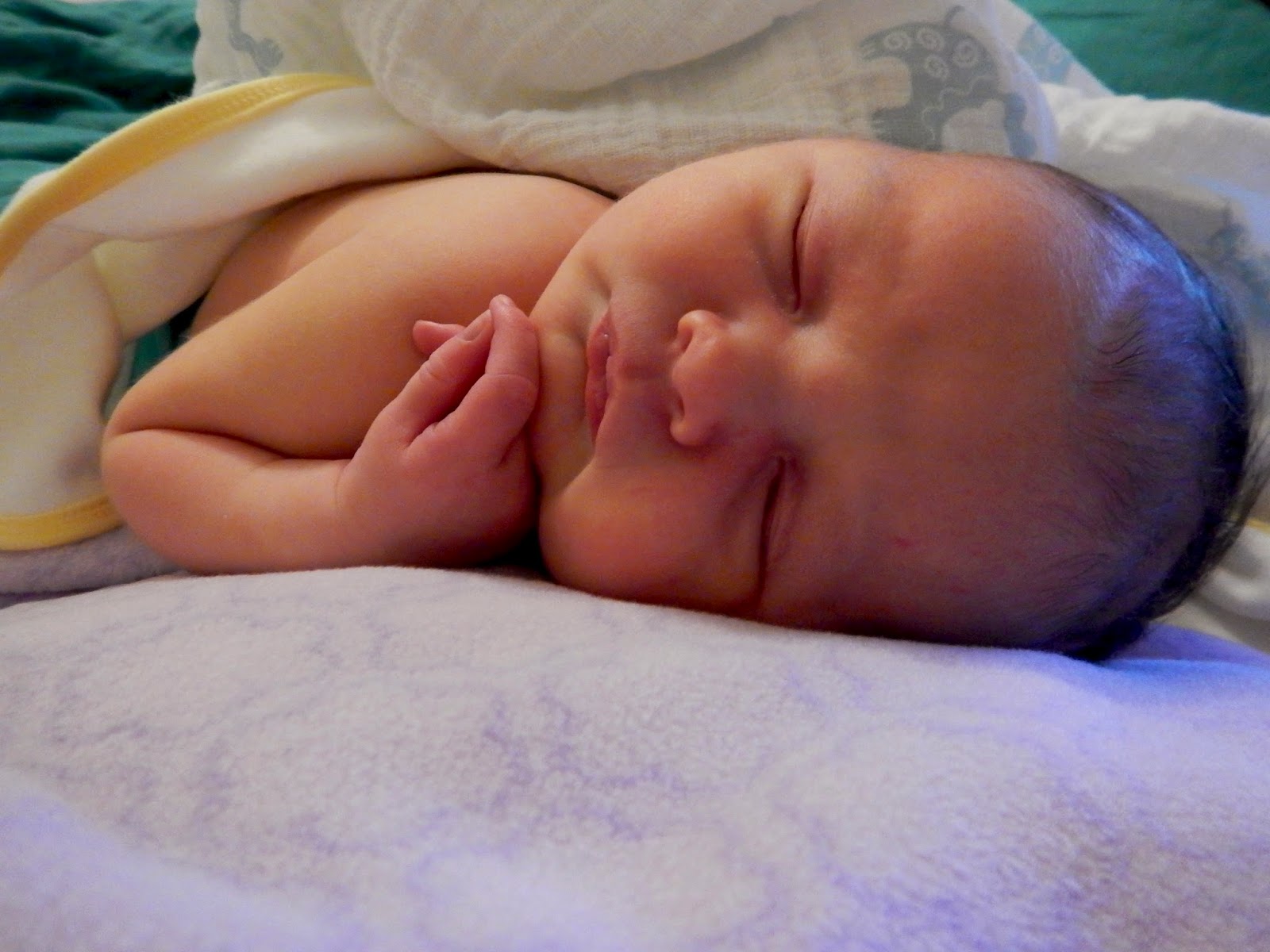 I'm thrilled to introduce you to Gertrude "Rudy" Lenore de Sa-Brown.  The newest member of our family was born on December 9th and had totally stolen our hearts shortly after we brought her home on the 11th.

Named Gertrude after my mother and Nana (who are called Trudy and Gertie respectively) we call her Rudy after a dearly loved uncle who is no longer with us.  Lenore has always been a favourite name and we love the meaning of "light" since her birthday will always fall near Hanukkah.  The last name is fairly obvious but I surprised myself when I suggested hyphenating our last names.  I had always thought hyphenated names were unnecessarily complicated but the feminist in me couldn't imagine anything more practical and natural than our child sharing BOTH of our last names.

Rudy was born crying and hungry.  Parts of her birth are still a blur but I can pinpoint the moment when I fell in love with my daughter.  We had just come home from the hospital a day or so earlier and I was holding Rudy against my chest.  She pushed herself away from my body and peered up at my face, blinking her eyes to try to focus.  Before that, I had loved her because she was my baby but I hadn't felt that profound bond that I had been expecting but at that moment, I knew I would do anything for her.  Forever.

In the womb, we called her Singleton and then Bruiser and it seems like we may have hit the nail on the head with the second nickname.  Rudy's tough and very strong for a newborn but has the sweetest, most heartbreaking cry (it sounds like  she's saying "laaa laaaaa laaaa") and she loves her daddy so much that she doesn't even mind sleeping against his hairy chest.  It's funny how even when they're so little, you get glimpses into their personality and we can tell that, as sweet as she is, Rudy likes to do things on her own.  She gets frustrated when I try to guide her while breastfeeding and apparently already knows better than me.  At five days old, the lactation consultant described her as "extremely competent for a newborn" and I beamed.

People always say time flies with a newborn but now I really understand it.  I don't even know what we've done the past few weeks but the days have sort of melted together and suddenly Rudy's bigger and we've found ourselves recognizing her different cries and in some sort of routine.  It still feels surreal but now we're in the parent club and life has changed forever.

I spent my pregnancy worried that I would change and not be myself and be too "mom-ish" after the baby arrived and now I worry that I haven't changed enough.  I mean, what am I supposed to do with this amazing little person and thank goodness she doesn't know that I have no idea what I'm doing.

I'll confess that the first few nights after she was born, I was afraid to put Rudy down.  I remember crying because I knew it wasn't safe for her to sleep on her side or stomach but I was terrified that if I let Rudy sleep on her back and she spat up, she would choke.  Everything is so scary at first!  For the first five nights of her life, Rudy slept on my chest and I propped my arms on both sides so that I couldn't roll over and she couldn't roll off.  I also didn't let myself really sleep because I was still worried I'd let her roll off me and she'd either fall to the floor or suffocate on a pillow.  Finally, my mother stepped in and pointed out that I wasn't sleeping and was starting to sound crazy.  Luckily, she pointed out that she had raised two children and that they both slept in cribs so (with a video monitor beside me, which we now refer to as "Rudy TV") I handed Rudy to my mom, who promptly had her happily sleeping in the crib for several hours at a time.  Thank goodness for Nanas!  I think my mother's the only reason Corey and I are getting any sleep... Which is necessary, since I've already started back to work. 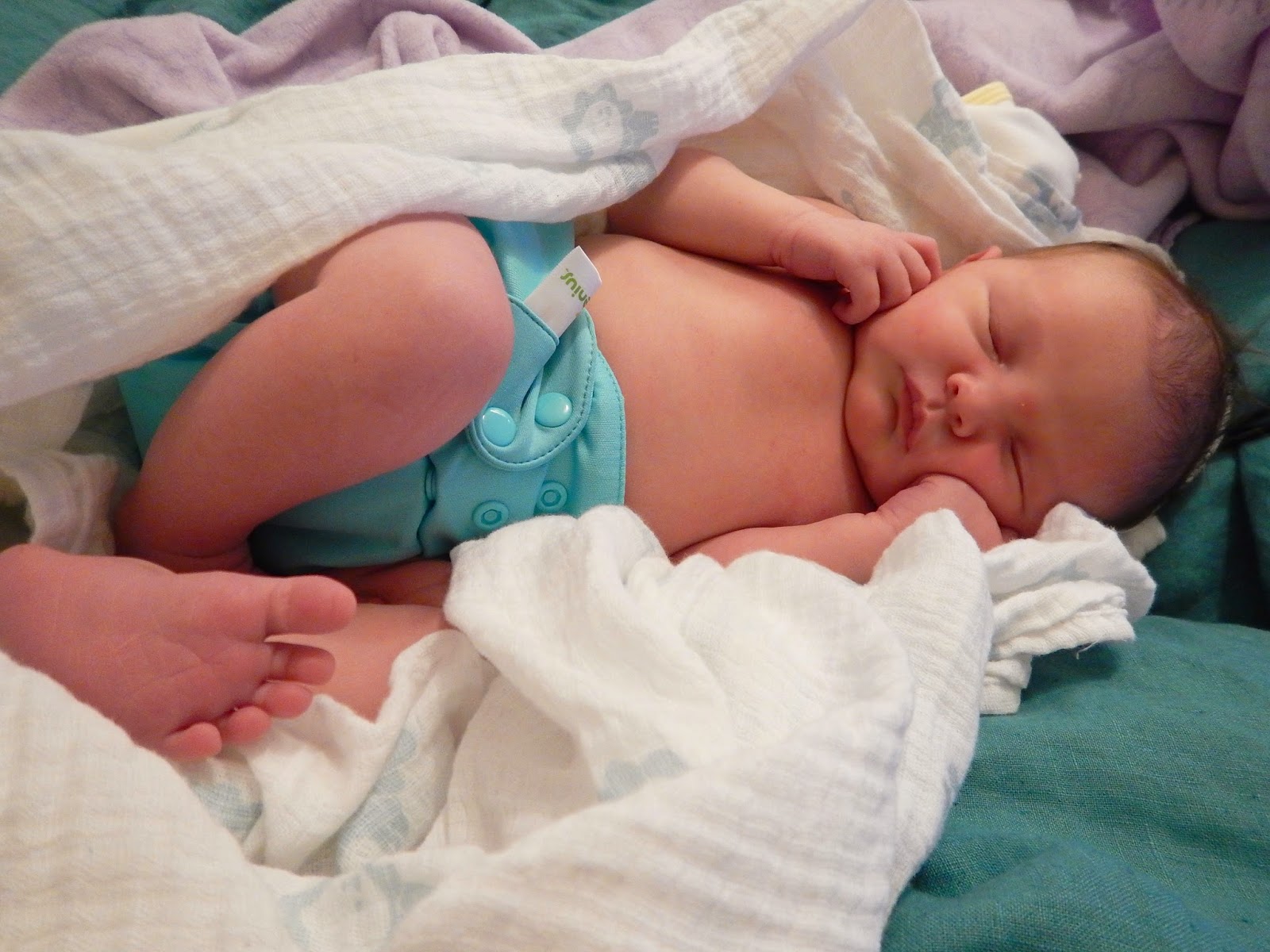 So there's a glimpse into our little world as new parents.  We are in awe of our amazing daughter who has miniature versions of my hands and Corey's feet.  We're (barely) managing to keep up with the laundry.  I only shower every three days.  We've learned to sleep a few hours at a time.  Diapers and baby spit-up don't gross us out at all.  Barkley and Cheetah seem to recognize Rudy as a pack member and not a toy.  Leaving the house as a family takes an unnaturally (and sort of inexplicably) long time.  The generosity of friends and family has lead to a plethora of baby items and clothes, which seem to inhabit every nook and cranny of our tiny house.  I've been psychotically and aggressively getting rid of extra clothes and furniture (You should see all the furniture that's gone to our curb over the past few weeks.  Nothing is safe!) to ensure that there's still room in this house for the dogs to move around with all of Rudy's extra stuff.  The house is a mess.  Life has been turned upside down... And we are so SO happy!
Posted by Taylor de Sa at 6:36 am