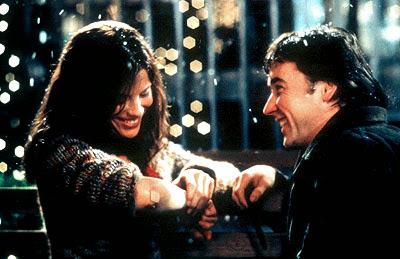 This past week has been a busy one, although we've barely touched the house.  I've been working almost every night and Corey's been fighting a cold, so our limited free time has been reading and watching movies by the tree... and not so much on busting out walls in the bathroom.  We're also waiting for the window we ordered, so that Corey can finish the insulation on that wall.

The plus side to all this is that we are now totally in the holiday spirit and all we want to do in our spare time is watch Christmas movies and drink hot cocoa!  While we usually don't have more than 20 minutes a night to watch something (and sometimes not even that!) I want to share my list of modern favourites.  I am aware that the "Christmas" status of some of these may be in question (I'm looking at you, Harry Potter.) but I'll explain my answers as I go.  Here they are, beginning with #10:

By the way, I thought of including old movies as well. but I just have too many favourites!

Do you remember this movie?  It's the cheesiest of cheese, but it also has everything: romance, fate, snow, skating in New York and magic!  While it has nothing to do with Christmas, this movie always puts me in a festive mood.  This movie was also the reason I read 'Love in the Time of Cholera' the first time.

9.  Harry Potter and the Philosopher's Stone

Also, not a Christmas movie, but I think the holidays are the only times when we have time for a HP marathon.  There's also something about the castle, all the candles and the music that makes me think of the holidays.  Also, Harry's so brave and happy to have a "family" that it makes me cry.  I'm a huge sucker for a sappy ending.  It's also nice to see Daniel Radcliffe so sweet and innocent before he grew up and got naked for that weird play.  This movie always makes me believe that there is such a thing as magic.

I promise that there will eventually be some actual Christmas movies on my Christmas movie list but this is another movie that spans years but always seems appropriate to watch around the holidays.  Also, I have read the books and I know the ending, but I still wish each time that Laurie and Jo might end up together.  I adored Christian Bale before we knew he was so angry.

Don't laugh- this movie cracks me up!  The scene with Statler and Waldorf just kills me.  I haven't watched this in years but it's a favourite!  Seriously, just watch that scene.

This is probably on every list but I still think it's a sweet movie.  First of all, it has Emma Thompson, Alan Rickman and basically every other British actor I like.  The performance at the end is probably my favourite part.

Say what you will about remakes, but I think this one's a gem!  Mara Wilson is cute as a button and I love the courtroom scene!  Also, the way her eyes light up when she sees her mom wearing the ring... awww!  Seriously, even the preview makes me cry.  "I ask you which is worse: a lie that draws a smile, or a truth that draws a tear?" Can't. Even. Deal.

I have already watched this one this year and I love pretty much everything about it!  It's a cheesy romantic comedy, but it leaves you feeling warm and tingly inside.

If this movie doesn't make you weep, you are probably made of stone.  I tried to explain why I love it so much to Corey, but it was hard to articulate through the tears.  It's because *sob* he *sniff* thinks *sniff* he has everything... *sob* but he doesn't have *sniff sniff* looove!

First of all, Will Ferrell is basically the most hilarious person in the world.  Add the rest of the awesome cast (including Zooey Deschanel before she was the hipster mascot) and some pretty Christmas songs and you already have a decent movie.  What pushes this over the top for me is that I always bust a gut laughing and it makes me want to answer my phone: "Buddy the elf.  What's your favourite colour?"

This isn't just my favourtie modern Christmas flick because Carrie Bradshaw's in it.  Okay, that helps, but I love their charming house and all the separate story lines.  This movie makes me want to have a huge family.  My favourite scene is the chase which ensues from the misunderstanding on Christmas morning.


Which movies make your list?
Posted by Taylor de Sa at 7:37 pm