A Climbing Wall For Our Mountain Goat 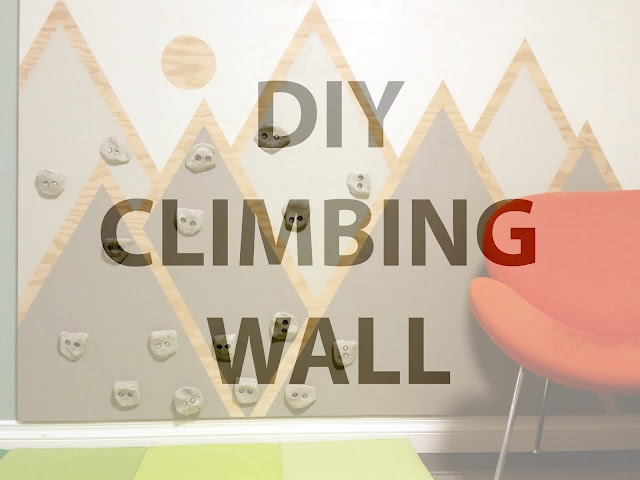 You're going to think we're crazy but we've built a small climbing wall for our one-year-old.  Okay, so Rudy's one and a half now but we actually built this wall for her months ago when she was still crawling!  Let me provide some background so you can see that we conceived this idea in a very sane way.  Here goes...

Rudy loves to climb.  Don't blame me; She gets it from Corey!  There is something unsettling about a baby who can not yet walk but will climb on to the back of the couch and then attempt to get her foot up on the window sill before being pulled down by terrified parents.  It was in trying to keep her safe and direct her to safe activities that I came up with the idea for a climbing wall.  Corey amended it by suggesting a more horizontal, rather than vertical climb and our idea was born. 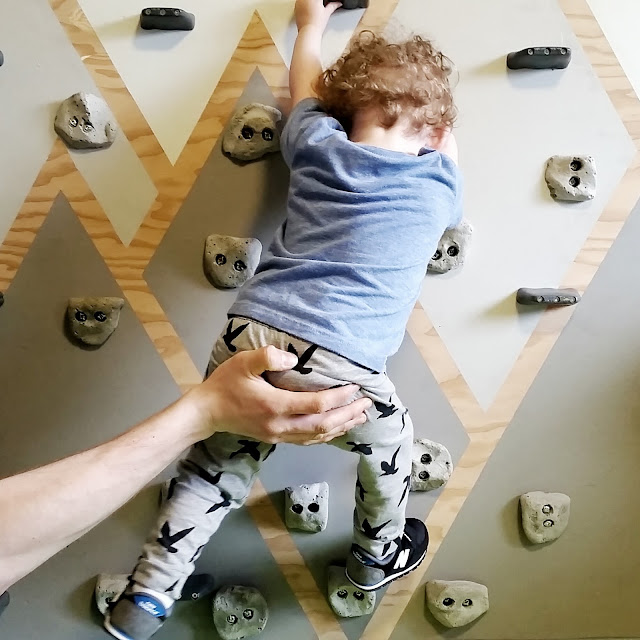 Corey knew that we would affix plywood to the wall and anchor the climbing holds (purchased on ebay) into the plywood for extra support.  I decided to paint an abstract mountain range on to the plywood.  We ended up choosing the three lighter greys from the photo below:  (lightest to darkest) Sherwin Williams "Icy Avalanche", "Modernist Gray", and "Perpetual Gray" 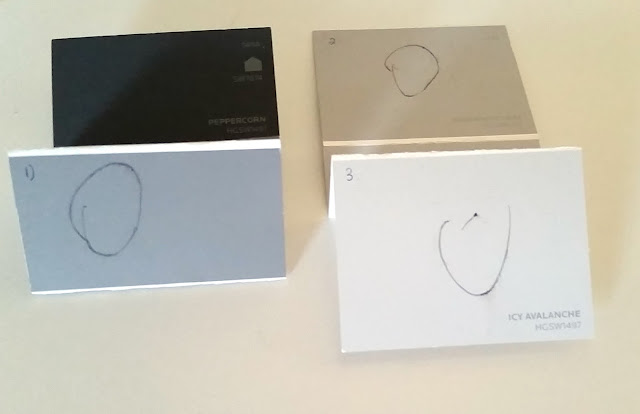 Over the course of a few nights, we prepared the plywood. 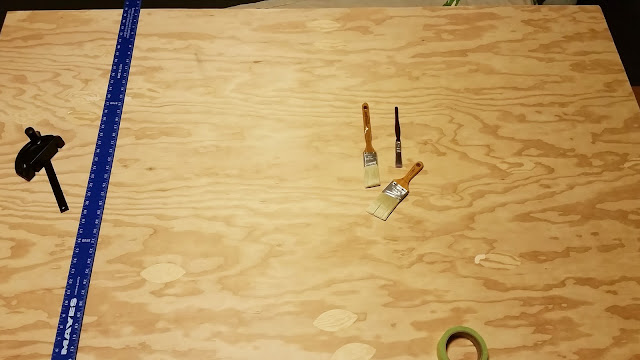 We measured the angles and "drew" our mountain range in tape.  Corey affixed it to the wall along the studs using a laser level (7) and we filled in the holes (8) before touching up the paint.

We used photoshop (10) to plan the positions of the holds. 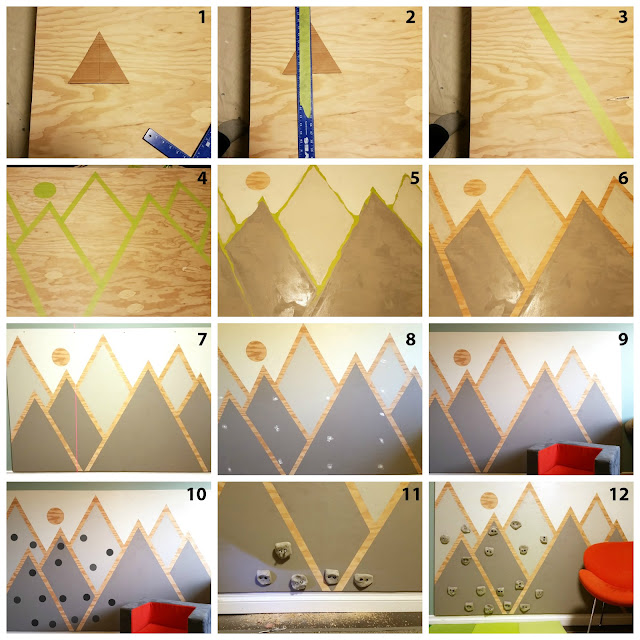 We sorted the holds, since some were better for stepping on and others made better hand grips!  Each one was anchored deep into the wall through the plywood. 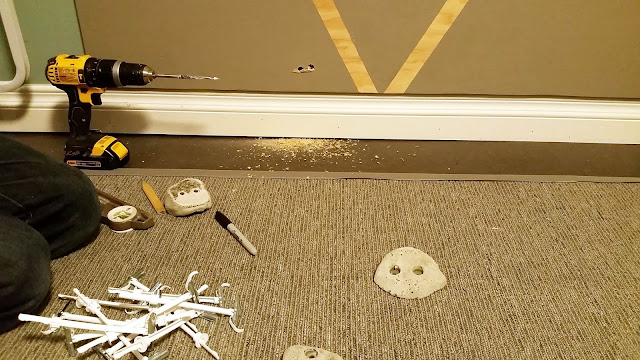 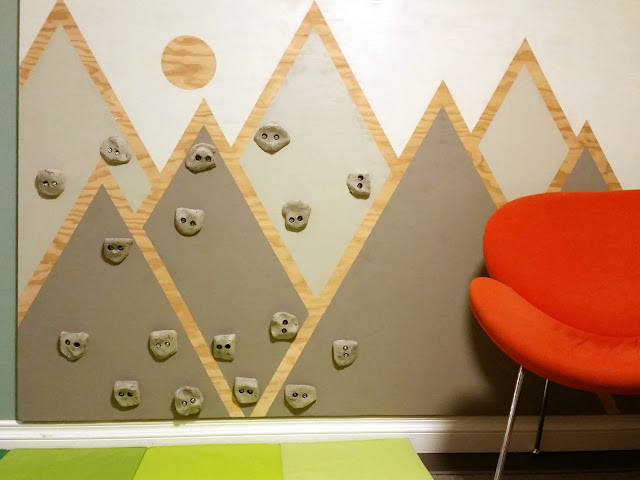 We eventually added a different type of hold as well, which was easier for Rudy to step on with shoes. 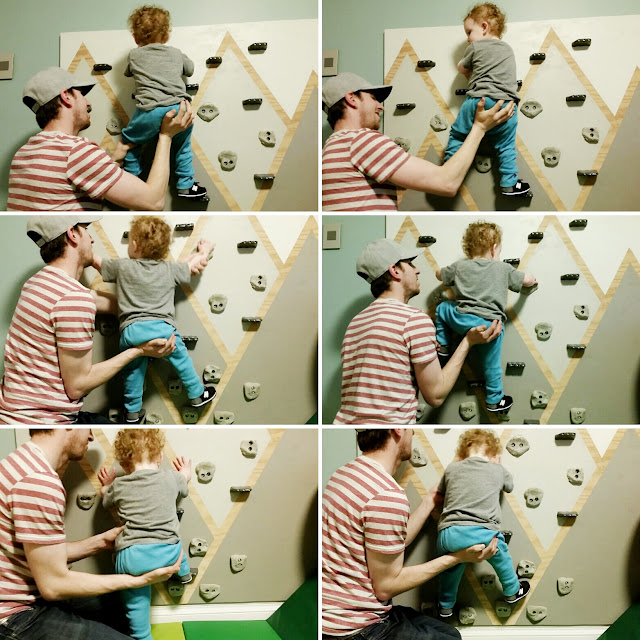 For months, Rudy was indifferent but she loves her climbing wall now!  It's good exercise (especially on a rainy day) and it gives her a lot of confidence!  You should see her tackle the climbing wall at our local park!

Today, Corey was making dinner while I was at work.  He popped his head into the family room to check on Rudy and she had started climbing the wall on her own!  He snapped a pic to send me because we are both so proud! 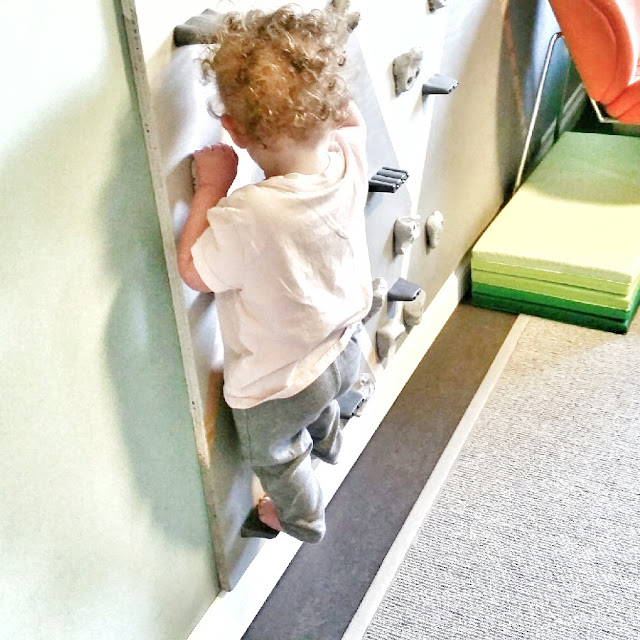 This has to be one of my favourite DIYs!
Posted by Taylor de Sa at 11:48 pm